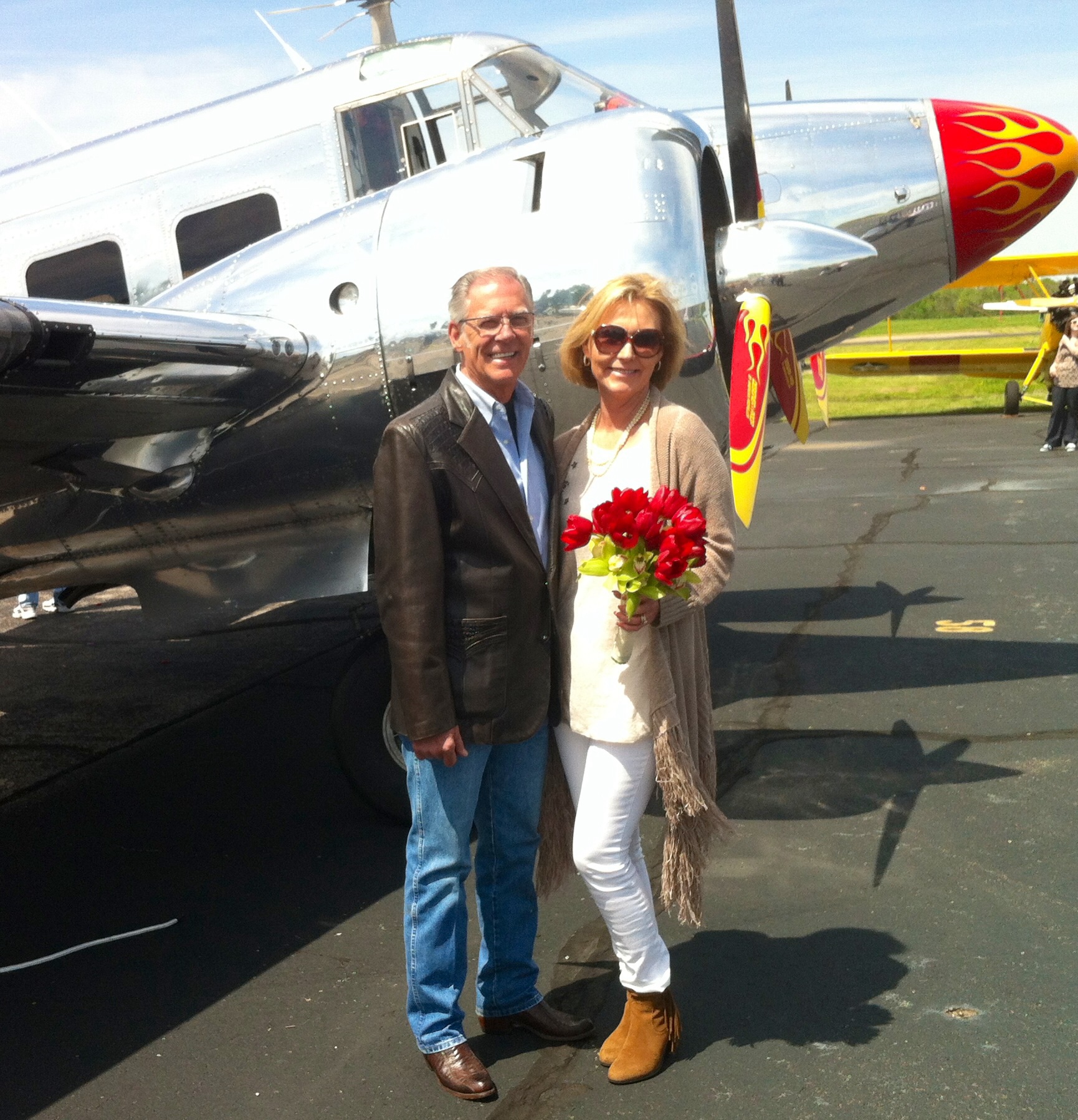 Thank you to Mary Nolan for kicking off our “Flying High Wedding” series so beautifully. Enjoy the story of Mary & Dennis Nolan’s airborne wedding in a Beech 18 — somewhere over Tennessee! 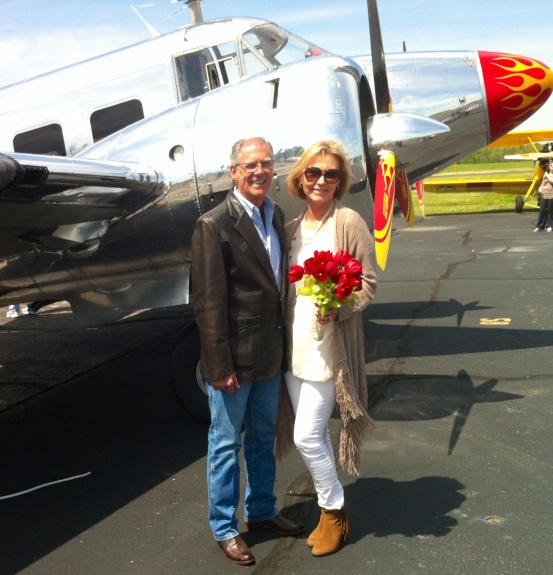 Dennis Nolan and I were married on 20 April, 2013 in a Beech-18. We met the year prior because many of our friends believed our backgrounds were a perfect match. Dennis has flown Bonanzas mostÂ of his life along with helicopters. His history of racing sprint cars and loving Harley Davidson motorcycles paralleled my career of T-6 racing at Reno, airshow performing, enjoying riding my own Harley plus a lifetime of civilian, USAF and Fedex flying. 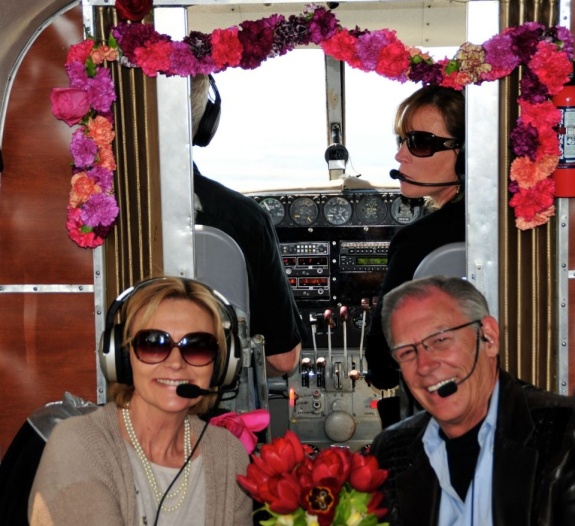 We wanted to be married in the air, so we checked into renting a King Air. It proved to be very expensive and rather tame. I called Jim Slocum and asked if he still had “Ursula”, his Beech-18 he had given me the privilege of flying at one of their wonderful fly-days. ‘No, but I know were to find it’ was his answer. He even humbly agreed to fly it during our wedding. 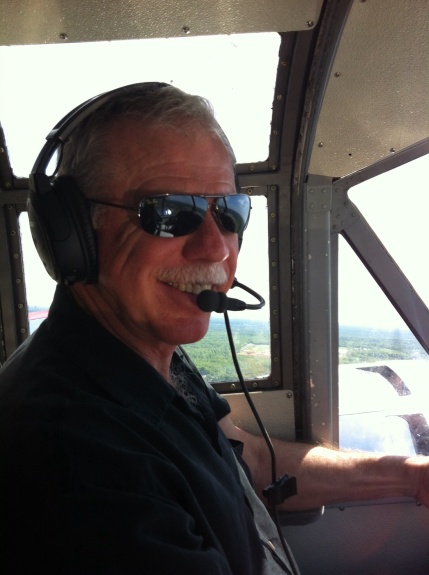 On the morning of the wedding after a brief turn back due to a cargo door problem, Jim, Val, Aubie and Lesley Pearman landed ‘in the Chapel’ at Charles Baker Airport. Val and Lesley had decorated the Beech with roses and ribbon, ‘she’ was stunning. Our airport friends decided to have their Spring Airport Day and help celebrate our day so lots of airplanes were beautifully parked on the ramp including our F-33 Bonanza and our wedding present…a Decathalon! 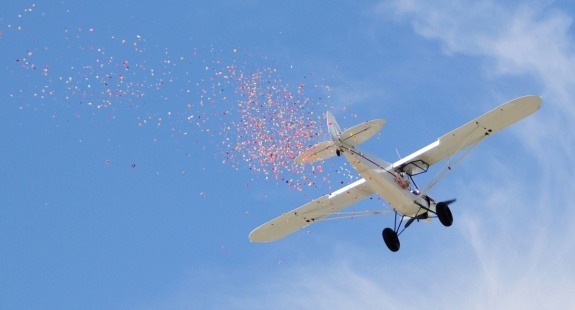 The hangar was decorated with tulips and Checker Flag linen. Our 200 guests arrived and watched a happy couple take off in an airplane full of pilots, even the preacher! 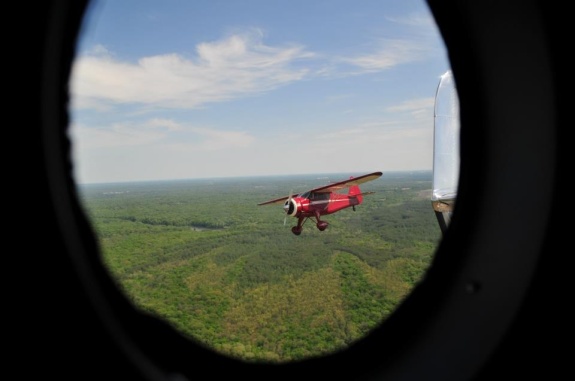 Our wedding party joined us in the air in two immaculate Howards and after we landed a Supercub flew over dropping rose petals…..Our guests were treated to wonderful food and lots of airplane rides…truly a magical Day. 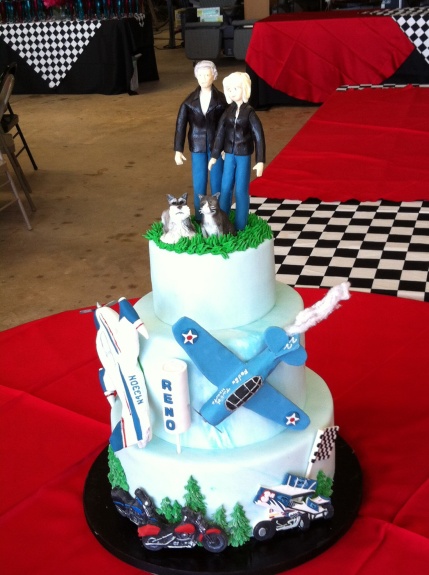 If you were married aloft or married at an airport, or know someone who was, we’d love to share your story. Submit atÂ Flying High Weddings!