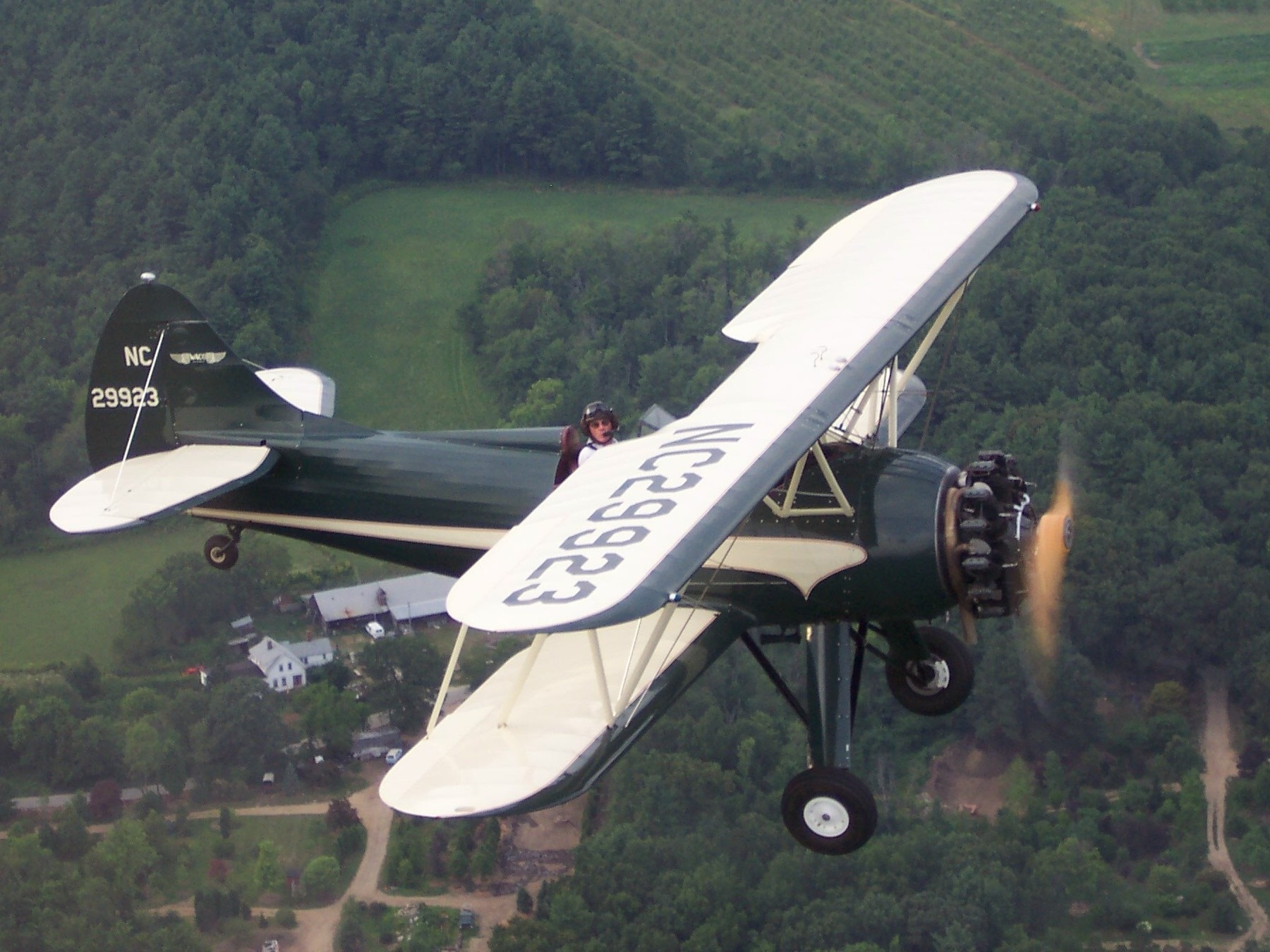 When it comes to interesting women aviator stories, sometimes I find out about them in unexpected ways. This one came by way of John Wood from Massachusetts in a message that read:

Linda Buroker-Melhoff’s mother Gladys Dawson-Buroker taught flying during World War II in a WACO UPF-7 based at Coeur d’Alene, Idaho. The aircraft has been carefully restored and is for sale. See attached picture and spec sheet. 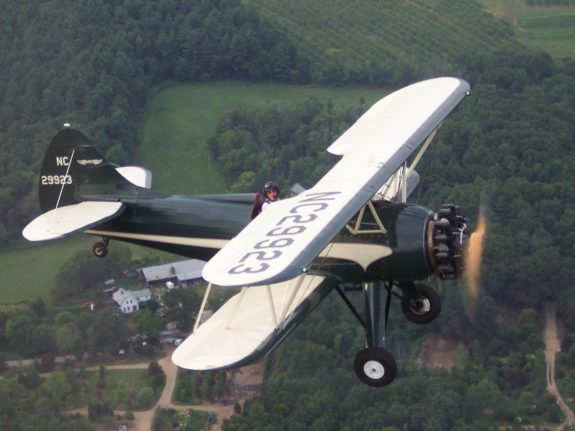 OK, I’ll bite – a gorgeous UPF-7 flown a long time ago by one of our own LadiesLoveTaildraggers’ mother, you bet. We’re not in the business of selling guy’s airplanes but if we can shed some light on just one very early lady pilot (all taildraggers), well, let’s do it.Â  I knew just a tiny bit about Gladys Buroker and John’s brief comments and photo were enough to make me want to know more. And never fear, links to the sale of this beautiful UPF-7 can be found at the end of this article. 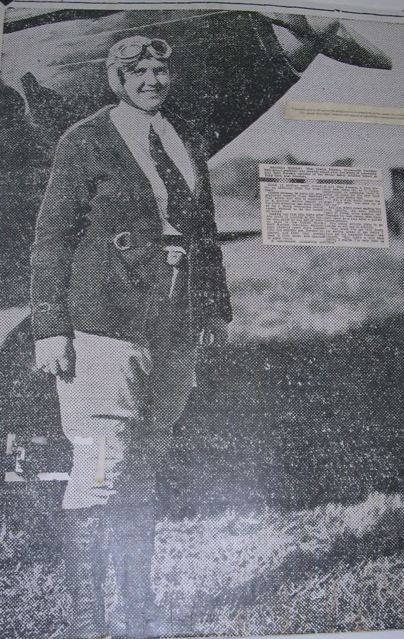 From the Smithsonian National Air and Space Museum 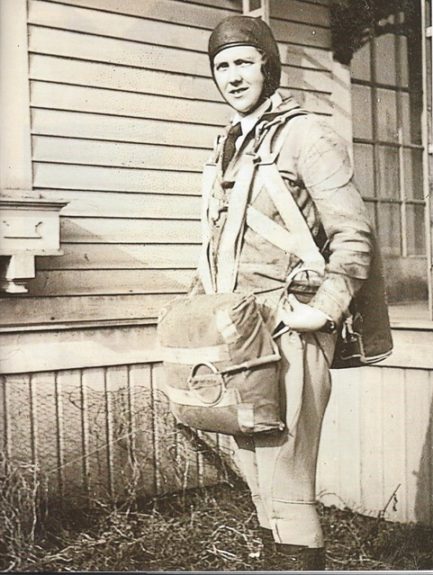 Gladys was born and raised north of Seattle, Washington. Her interest in aviation began as a child. At 18, a high school graduate, she made her first solo flight after only five hours of instruction. She flew an OX-5 Waco 10 on a September day in 1932. Her sense of adventure led her to parachute jumping with a barnstorming group, wing walking, and a motorcycle tour of the 48 states.

By 1935 she had saved enough money to buy her first plane, a two year old Travel Air 2000 for $400. The plane boasted a Curtis OX-6 water cooled 100 horsepower engine, the first of its type to be manufactured with dual ignition — it was a hot machine. 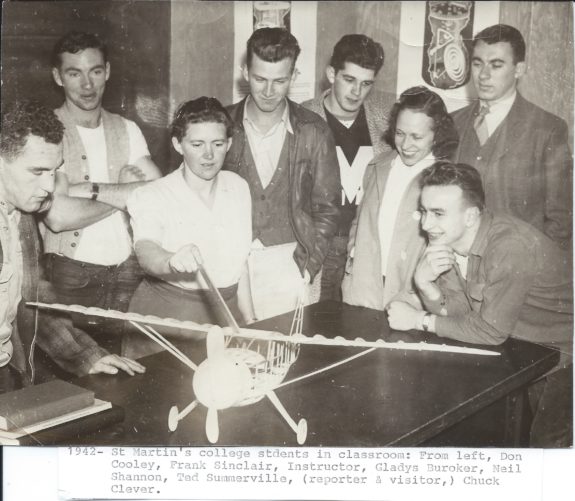 As World War II approached she became the first woman instructor at the all-male St. Martin’s College (Lacey, Washington) in the Civilian Pilot Training Program. With the outbreak of the war Gladys and her husband moved their pilot training inland to Coeur d’Alene, Idaho. With the U.S. now at war, their flight training program was part of the War Training Service (WTS). By 1943 their program had grown to 38 flight instructors and 200 students. In January 1944 they received notice that the WTS activities would cease immediately. They were fortunate to be able to obtain a contract through the Veterans Administration for veteran flight training.

A hanger fire in 1950 prompted a change of life for the couple. In the late 1960’s Gladys embarked on a second career as a licensed practical nurse at the Kootenai Memorial Hospital. She remained actively involved with aviation, and participated in the development of the Henley Aerodrome at Athol, Idaho, a base for vintage airplanes. In 1972 she bought a Semco (9GB) hot air balloon, the challenger model, TC-7, which came equipped with three burners and a wicker basket. She flew that hot air balloon on the opening day at the Expo ’74 World’s Fair in Spokane, Washington. In addition to planes and balloons, she was also involved with gliders.

In retirement she became manager of flight operations for the new owner of the aerodrome. She flew gliders, and on occasion, the Pawnee tow plane and the Cessna 182 “jump” plane. At the end of the season in 1990 she chose to retire. Gladys Buroker represents that indomitable will that sparks all who fly. 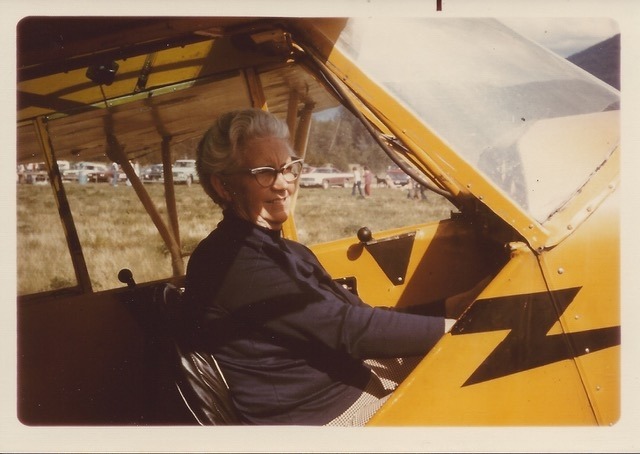 She was the recipient of many awards, a few of which include Hall of Fame Pathfinder Award, Museum of Flight Seattle, Washington; Instructor of the Year Award, Federal Aviation Administration, Tacoma, Washington; she was featured in the Museum of Oshkosh with an exhibit “The Life of Gladys Buroker;” J.C. Penney Spirit of the American Woman Award, Coeur D’Alene, Idaho; Idaho Aviation Hall of Fame Award, Boise, Idaho, National Aeronautic Association Elder Statesman of Aviation Award, Washington, D.C. 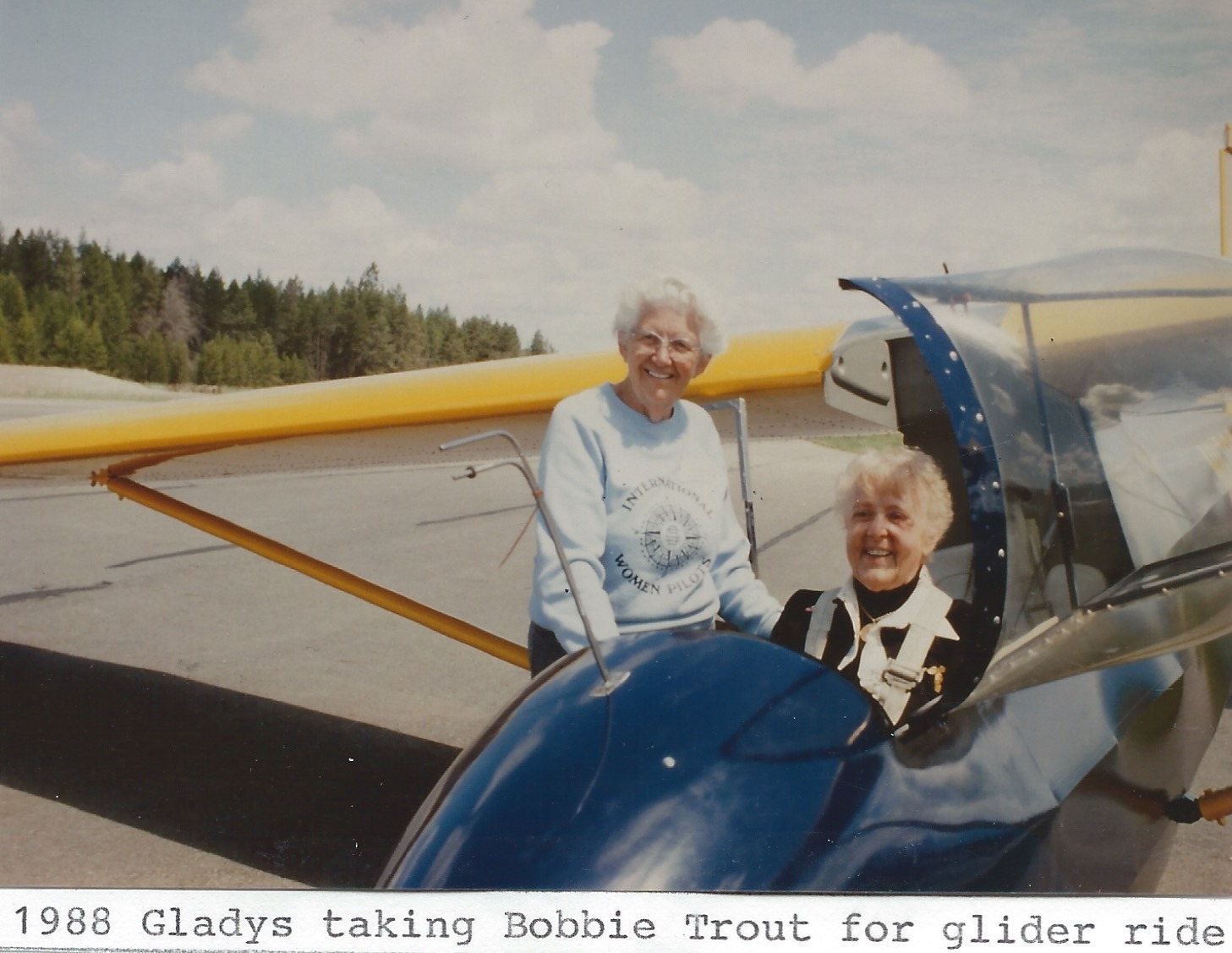 Giving a glider ride to Bobbie Trout, one of the original 99’s. Photo provided by Linda Buroker-Melhoff.

And many thanks to daughter Linda Buroker-Melhoff for giving us the inside track about her amazing mother. “Aviation was her life from age 18 to her last flight at 80 years old.”

Gladys Dawson Buroker was born 3/16/1914 in Belligham WAâ€“ Died 11/08/2002 in Coeur d’Alene, ID.Â  Early in life she found escape and diversion from her abusive father by riding her bike to a local field to watch airplanes and dream of flying. She married her flight instructor, Herb Buroker, who encouraged her to get a flight instructor rating. This ultimately resulted in her life-long career of teaching people to fly.

Gladys had 3 children, 2 daughters, Sally and Linda, who both got their pilot license through her instruction. Her son, Kelly, enjoyed parachute jumping and hang gliding in his younger years. Yes, we all took her amazing accomplishments for granted and I was even embarrassed as a teenager when other mothers were shown on TV gliding around the house in dresses and high heels. :)Â  But my Mother, GLADYS DAWSON BUROKER left an amazing legacy.Â Her courage, strength and pursuit of fun prove that you should â€œdare to be differentâ€ and follow your dreams. 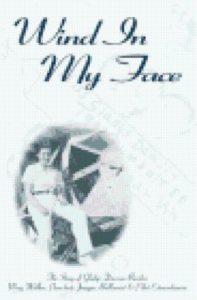 Wind In My FaceÂ $15. Some autographed copies are available for $20.

And check out links to 360 degree views.