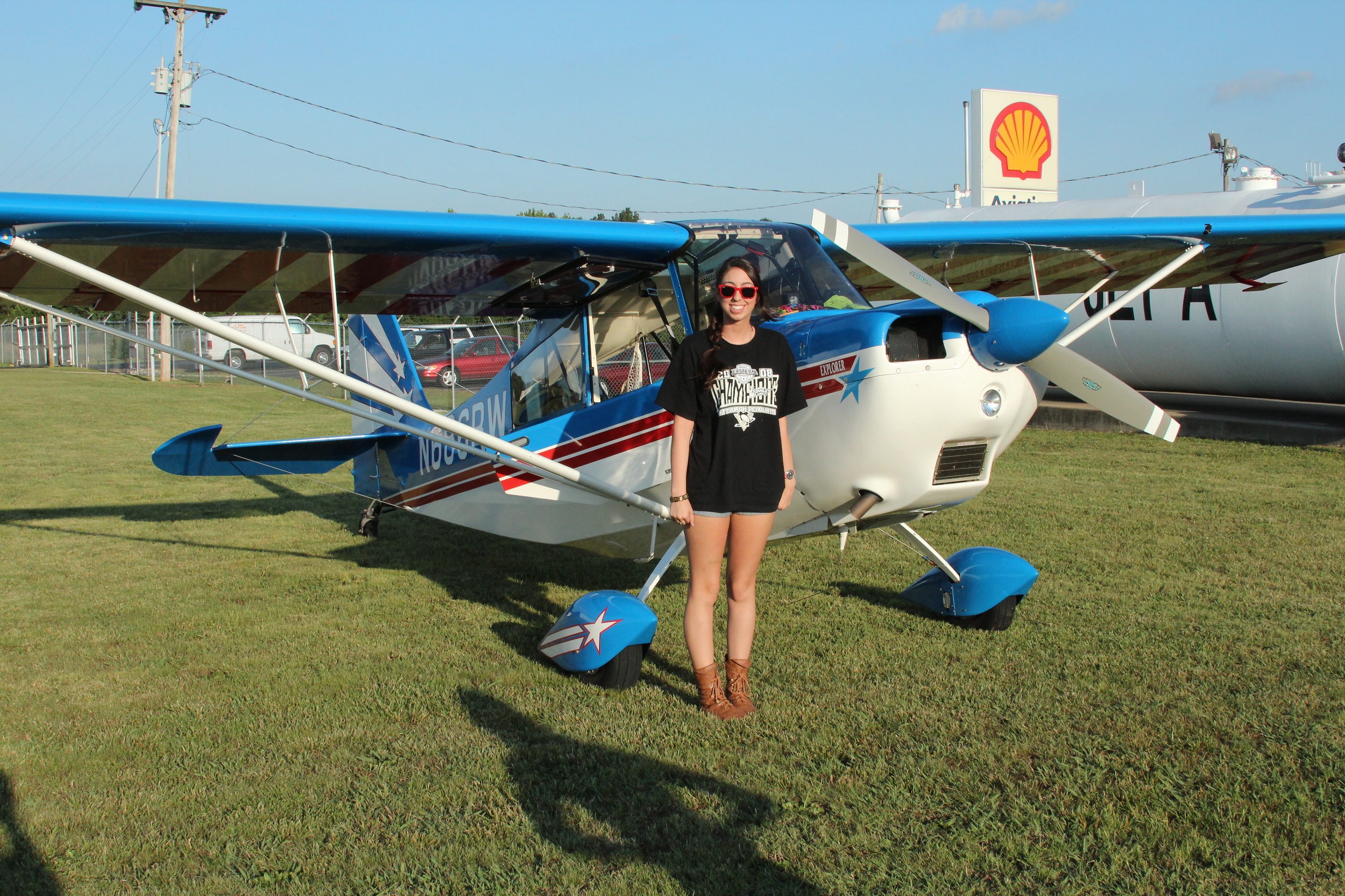 This is the greatest story! 16 year old student pilot Allison Driver, instructed by her grandfather in his airplane, a Citabria, flies her first solo cross country 99 n.m. to our lady taildraggers fly-in in Savannah, TN. Pretty darn cool! Allison has been flying with her grandfather,Â CFI Ernest Betencourt, for some time and even registered on LadiesLoveTaildraggers at the ripe old age of 14. She has been working towards the goal of soloing on her 16th birthday and on Sunday, May 20, she met that goal soloing atÂ the Murfreesboro, Tennessee Airport. 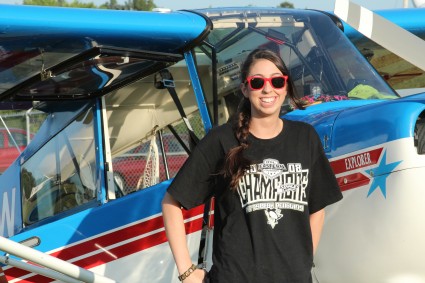 Ernst writes, “Instructing Allison has been very rewarding and yes, occasionally challenging. Blending crotchety old man, grandfather and flight instructor is an imperfect process. You are right, I worry about all the things I haven’t had time to teach her, worry about all the things that can go wrong and then try to let her literally spread her wings while I keep my worries to myself. She has really been a fun student, has learned well so far, and is a very good “stick” in terms of her ability to handle the airplane. She can fly the Citabria as well as I can on all the basics, landings, T/Os etc. Probably better on the routine stuff because she pays more attention.” 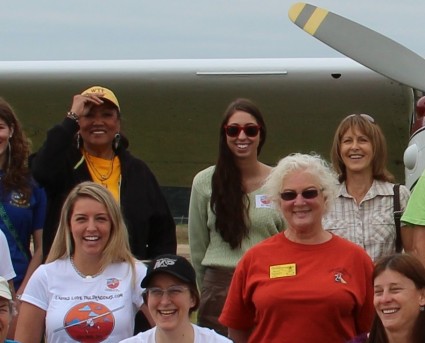 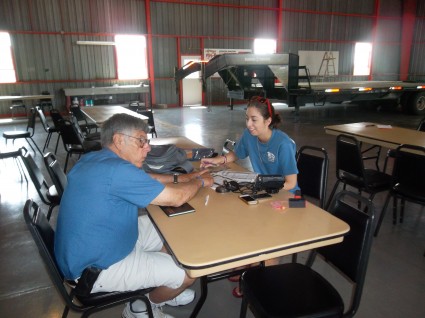 Sunday morning of the fly-in; a little instruction time, reviewing Allison’s flight plan and signing her off for the trip home.

What a wonderful day in the young life of Miss Allison Driver as she completed her solo flights in a most traditional and significant style creating a memorable moment at the Murfreesboro Airport on Sunday May 20, 2012.

This Solo event was significant in a number of different ways. First of all her Solo was completed on her 16th birthday on the first day of her life when it was legal to do so. Not many pilots are able to brag about such a feat. It does take an early commitment with that goal well in mind. Secondly, her instructor was her Grandpa Ernest Betancourt one of our most respected Military and Commercial Instructor Pilots and EAA Chapter 419 Members. Most know Ernie by his Big Fire Engine Red Waco that captures our attention every time he flies. 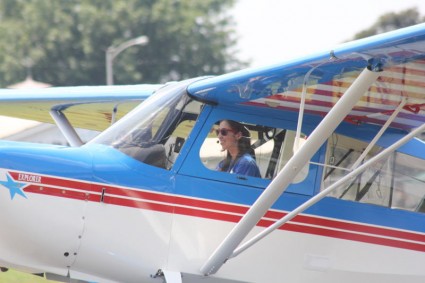 Taxiing back after first solo landing

A third significant factor was the fact that Allison accomplished her Solo flights in a tail dragger- American Champion Citabria Explorer. As everyone knows, it takes additional skills to fly this type of aircraft. A fourth significant factor is that Grandpa Betancourt had significant confidence in the ability of Allison to invite all his friends and relatives to attend the occasion while Grandma Betancourt supplied cookies and soft drinks for all those attending the celebration. Grandma also prepared to hang a big sign on the airport fence after the Solo flights were completed.

Another significant factor was the fact that Allison accomplished her Solo flights on a beautiful afternoon that was summer like with cumulous clouds and bright blue skies. Pilots know that such conditions produce rough turbulence that can make for uncomfortable flying. Most instructors like to do their solo flights early in the morning or evening when the air is smooth for easy flying. But Allison did a fantastic job looking like a professional pilot. I heard a comment from one of the fellows who said listening to her do her reports on the radio round the pattern that she was cool, collected, and sounded better than some of the best MTSU students. 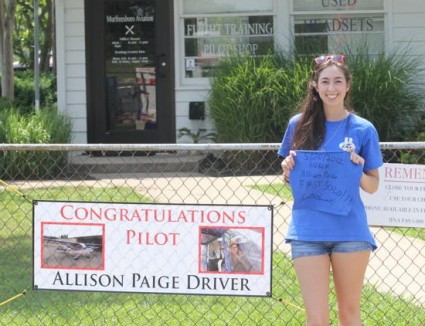 Allison posed with banner her family made for herÂ

On Allisonâ€™s third and final landing, she planted the tail wheel on the ground somewhat ahead of the main wheels. During the social time while munching on a cookie, her Instructor Grandpa Betancourt commented that he liked to see people plant the tail wheel on the ground first because you know if that happens the aircraft is in a completely stable condition and will complete a safe landing every time. When one thinks about the physics and dynamics of the tail wheel aircraft, this is a scientifically true statement. 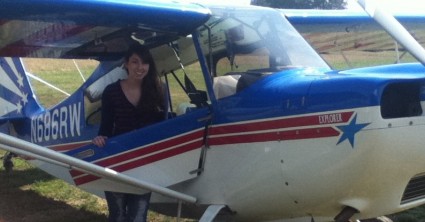 Keeping with tradition someone, perhaps Grandpa, cut a big swath of cloth out of the back of Allisonâ€™s T Shirt to hang as a souvenir of the event.

While enjoying her cookie and refreshment, I asked Allison a very general question about what she expected for her future. My jaw dropped to the ground when she told me what her aspirations were in life not expecting anything like she was about to say. Allison said that she wanted to have a Pink Cabin Waco on floats. I countered with â€œOh, you want to live in Alaska?â€ The response was â€œNo (stupid) in Florida!â€ A PINK CABIN WACO ON FLOATS IN FLORIDA!!!!