This is an amazing photoÂ documentationÂ sent in by Amal Ajmi. She’s based in Fairbanks, Alaska and flew her PA-11 Piper Cub Special along side her friend, Kalin Kellie who was flying her Aeronca Champ around Alaska. 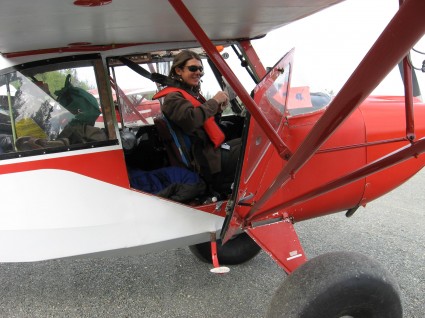 Kalin and her Champ

It has been an odd summer up here, but wanted to share the last trip I did with a fellow pilot, Kalin Kellie.

Kalin flies a Champ. She planned a Tour De Southcentral and I came along Â for the fly.Â  This was Kalin’s first time seeing Prince William Sound, and I know she loved it.Â  I have spent many, many days sea kayaking this area, but had never seen it from above, so I was excited to see the places I had been throughout the years.Â  We started out on a clear, hot Friday. 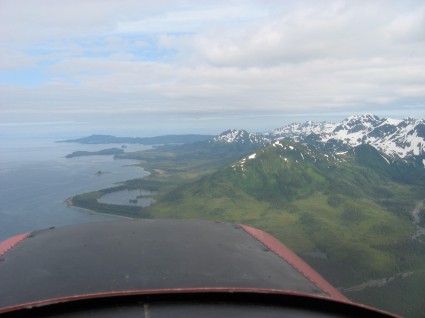 Flew through Windy Pass, landing in Willow for fuel.Â  TheÂ ceilings got lower and the air cooler which was a relief to bothÂ pilots and planes.Â  Moving on to Birchwood and then navigating around the busy Anchorage area, along the hillside just below the overcast layer,Â we moved ontoÂ Hope where Kalin made a spectacular landing in whirly wind conditions. 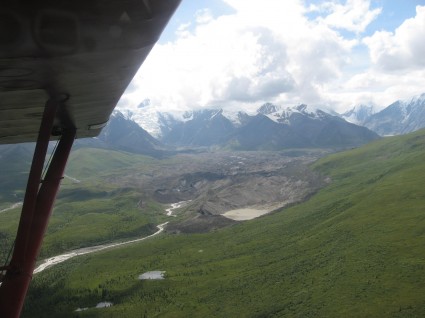 I made a couple passes and decided it was too much for me and my bird, so we moved onto Ninilchik where we stopped to stretch out and give Blue, Kalinâ€™s black lab co-pilot, his dinner.Â  Then onto Homer for the night. We found a nice tenting spot right on the spit and crashed hard.Â Â It was a great day!!!! 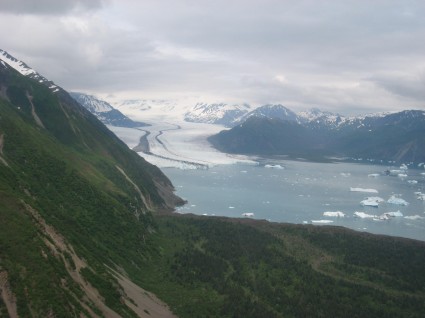 On Saturday, we went to a local diner at the Homer Airport for B-fastÂ and picked a lot of pilot brains for our next leg of the trip.Â  We were both unfamiliar with the outer coast and wanted to find some beach locations we could land on in case of emergencies. Needless to say, we got a lot of advice and well wishes, got weather and took off across the bay to play in Seldovia, Port Graham and then along the coast to Seward where we got some fuel. 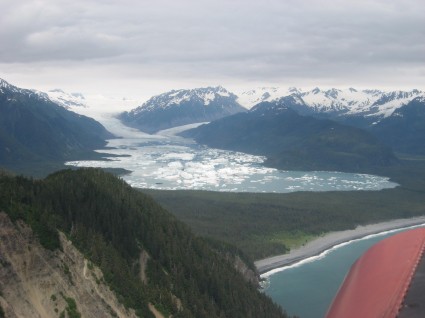 I tried to take pictures along the way to remember how incredible the scenery was, and must say they just do not do justice to what the eye perceived.Â Â We found many beaches suitable for landings, one even had its own plane, most likely its pilot fishing in the nearby lake.Â Â Yet there were many, too many it seemed, stretches of coast line that were made up of unforgiving sheer cliffs or large boulders. Beautiful!! 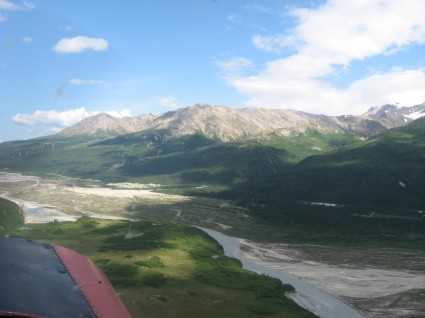 At some cliff drops we saw bald eagles soaring in the winds created by the sea air rushing up the cliff walls.Â Â Literally, we flew with the eagles.Â We flew the coastline of the Kenai Fiords, and bay after bay we crossed glaciers, like white fingers stretching from the land to dip into the cool waters of the ocean. 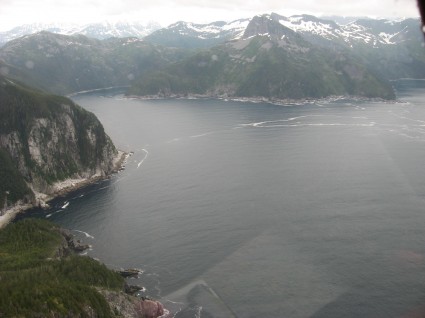 Coastline between Homer and Seward

After fueling up in Seward we flew over to Chenega Bay strip on Evans Island, then a major crossing to Montague Island, then Hinchinbrook Island and then Cordova Municipal airport.Â  We needed to stretch our legs for a bit and recover from so many water crossings.Â  Both Kalin and I are interior girls and the long water crossings were a bit unnerving. 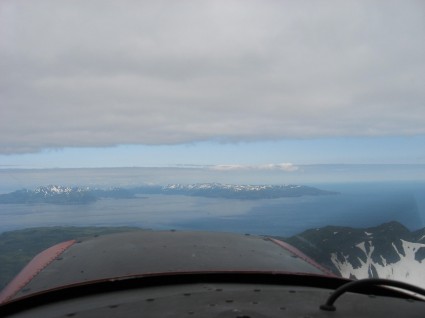 YIKES!!! Lots of water to cross to Hinchinbrook Island

You fly really high, but still want to see the scenery.Â  It’s at that point where you are in the middle of the crossing that every single engine noise is apparent.Â  Any oddness to the familiar hum-beat of your birds’ engine sends a shiver down to the very core.Â  We ended up aiming for fishing boats along the crossing routeÂ just for safety sake with the thought that if need be we could ditch very close by and the fisher folk would beÂ near enough to get to us. Unnecessary though, our little birds were top performers. 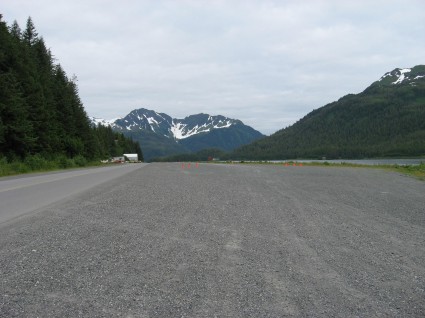 Cordova Municipal is a neat little strip in town.Â  The parking is across the street up against the hillside.Â  As you can see from the pics we were in great company.Â  We walked into town and found a neat little yarn store, and since Kalin and I are knitters, we decided to get some yarn for Cordova memory projects. We wandered for a good two hours and made our way back to the planes for our last hop of the day. 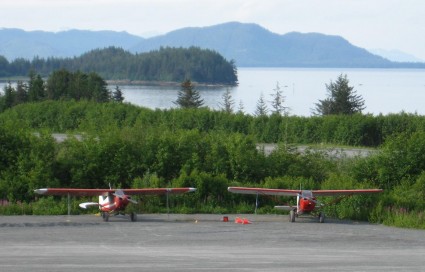 I have a friend in Elamar and so we took a short jump to Tatitlik and parked the planes for the night.Â  Elamar is about 2 miles from the strip, so we had another opportunity to stretch legs and let Blue run his little heart out on the way to the cabin we would spend the night in. Oh, the luxury of a soft bed when your body is humming from a long day of flying and nerves a little shot from broadening flying boundaries!!!! All I can say that the night in Elamar was heavenly!!!! 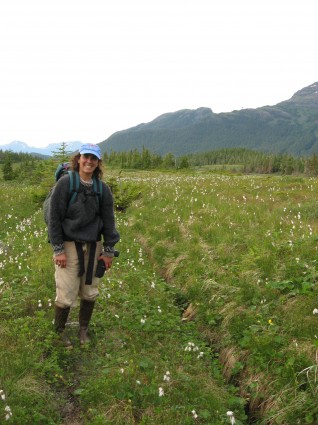 Trail to Luxurious Cabin at Elamar.

Up again the next morning, we hiked back to the planes and were excited by the prospect of a clear sky fly into Valdez.Â Â We were hoping to find some fuel in the port city, but found that our little pink book, the Facilities Directory, was not altogether truthful about obtaining fuelâ€¦.good thing Kalin and I plan ahead and haul a couple of hours worth with us in case of such incidents. 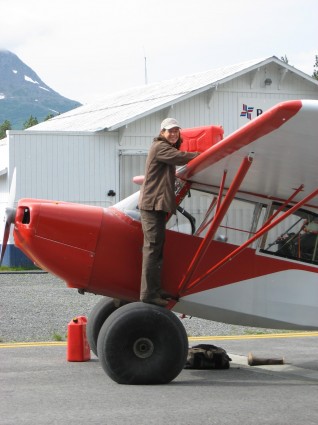 Blue found the warm tarmac to be quite lovely and lounged as Kalin fueled up.Â Â Up again, we had a spectacular view of Thompson Pass, and landed at the little strip next to Worthington Glacier at the summit.Â Â I think the tourists had a good show.Â Â We made our way through the pass and came out with breathtaking views of the Wrangle Mountains. 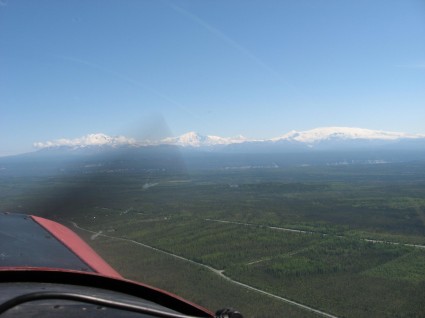 Again the pictures do not do justice to the heart stopping beauty of this rare sight. I seldom I get to this area, and even rarer that I can see the peaks not shrouded in cloud cover. 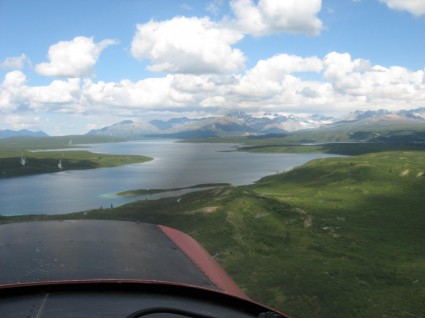 Onward we flew to Gulkana for fuel and a leg stretch.Â Â We checked weather at the spectacular little pilot lounge and off we went for our last hop of the trip.Â Â A little landing in Paxson, another at Black Rapids, and then skirting the Alaska Range we played alone the moraines a bit and made a beeline for home. 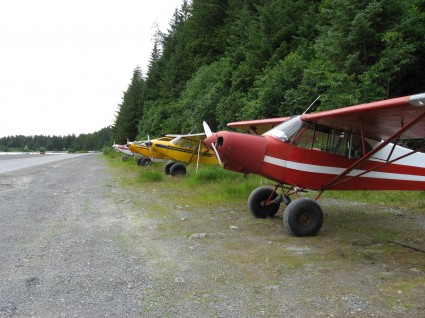 Company of planes with my bird at Cordova Municipal 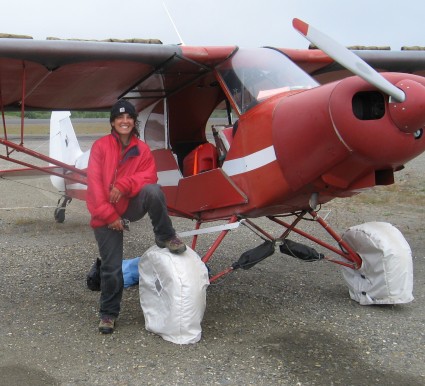