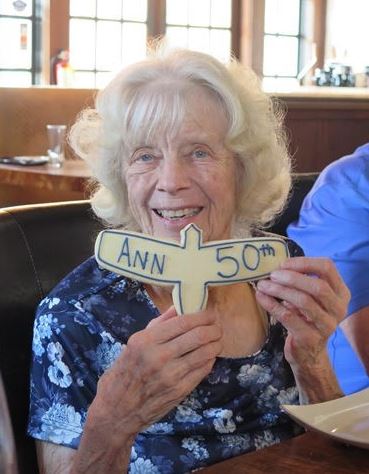 Thank you to the AAA/APM for the following big news about our very own LLT member, Ann Pellegreno.

Ann is well known to LadiesLoveTaildraggers and members of the AAA, as well as being a fixture at the AAA/APM Invitational Fly-In at Blakesburg, Iowa, over Labor Day weekend.

However, many of our newer or younger members may not have heard of her, or that in 1967 she completed Amelia Earhart’s ill fated attempt to fly around the world, using an identical Lockheed 10.

It was great news then, to hear about Ann receiving the FAAâ€™s highest honor.

We received the following report about Annâ€™s award from TX AAA Fly-In Chairman Joel Meanor. Hello Brent, As you know, our friend Ann Holtgren Pellegreno received the Wright Brothers Master Pilot Award on March 8th.  This award is the most prestigious award the FAA issues to pilots who have exhibited professionalism, skill, and aviation expertise for at least 50 years! Several Texas AAA Chapter members attended the lunch at Hannahâ€™s in Denton, including AAA National Director Terry Wallace. Others were Kathy and Joel Meanor, Cindy and Bo Case, Cathy Hulme, and Mary and Doug Sockwell. Mr. Joe Murphy, Program Manager of the FAA FAAST Team at the Dallas FSDO, presented the award.

Our â€œCONGRATULATIONS !!â€ to Ann on this much deserved award.