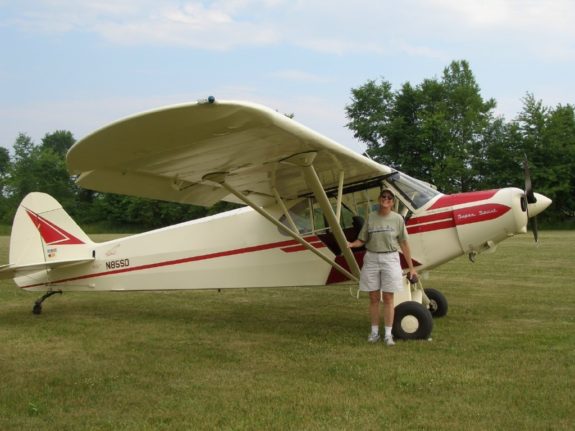 On a tour with the Michigan Stearman Club

I had been a member of a flying club with some beautiful, well-kept Archers, and enjoyed flying them. Until I met a J3 Cub at the Lantana (FL) airport while on vacation. Back home, I earned my tailwheel endorsement, but the only time I flew a taildragger was back at Lantana (my parents were snowbirds, and Lantana was the closest escape). And then I started dreaming about owning my own plane (what pilot doesn’t have that dream?). Since a J3 didn’t seem big enough or fast enough for two people and camping gear, I determined a Super Cub would be perfect. Knowing my husband Tim (not a pilot) would not fall for it, I bought two lottery tickets and a Trade-A-Plane twice a month, and continued to dream.

At some point, we decided to take a road trip, going to various guitar-themed locations. Recently, I had corresponded briefly with Don Snyder in Minersville PA about a homebuilt Super Cub he was selling, and it happened to be only-slightly off our guitar route. We stopped in, admired the plane, Tim went through the logbooks like he knew what he was looking for, we thanked the Snyders for their hospitality, and continued on our trip. 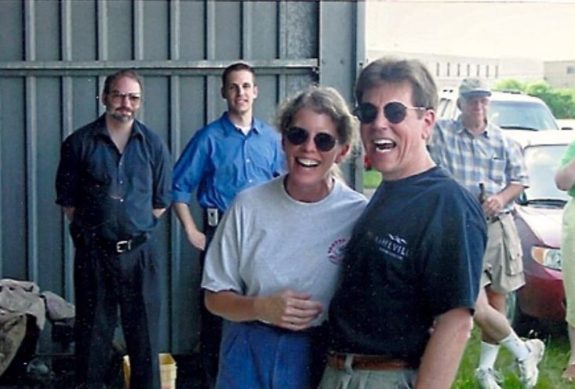 Anne & Tim Wright. Surprise!Â Â Tim is not only hugging me, but holding me up.

Fast forward a couple of months. There’s a party at a friend’s hangar. Quick, think of a dish to bring! We get there, Tim throws open the hangar door, and I ask, “What’s Don’s plane doing here?” Everyone laughs, and Tim says, “It’s not Don’s plane, it’s yours!” Dumbfounded? You bet! Tim had contacted Don, and put in an offer. There was a deposit, but the guy wasn’t following through. Don returned that guy’s money, and sold it to Tim. Tim had arranged a hangar (which was in tight supply at the time), insurance, pre-buy, transport, and the party, all without me knowing (but about a hundred other people were sworn to secrecy). A non-pilot gifting a pilot with the plane of her dreams? That was true love!