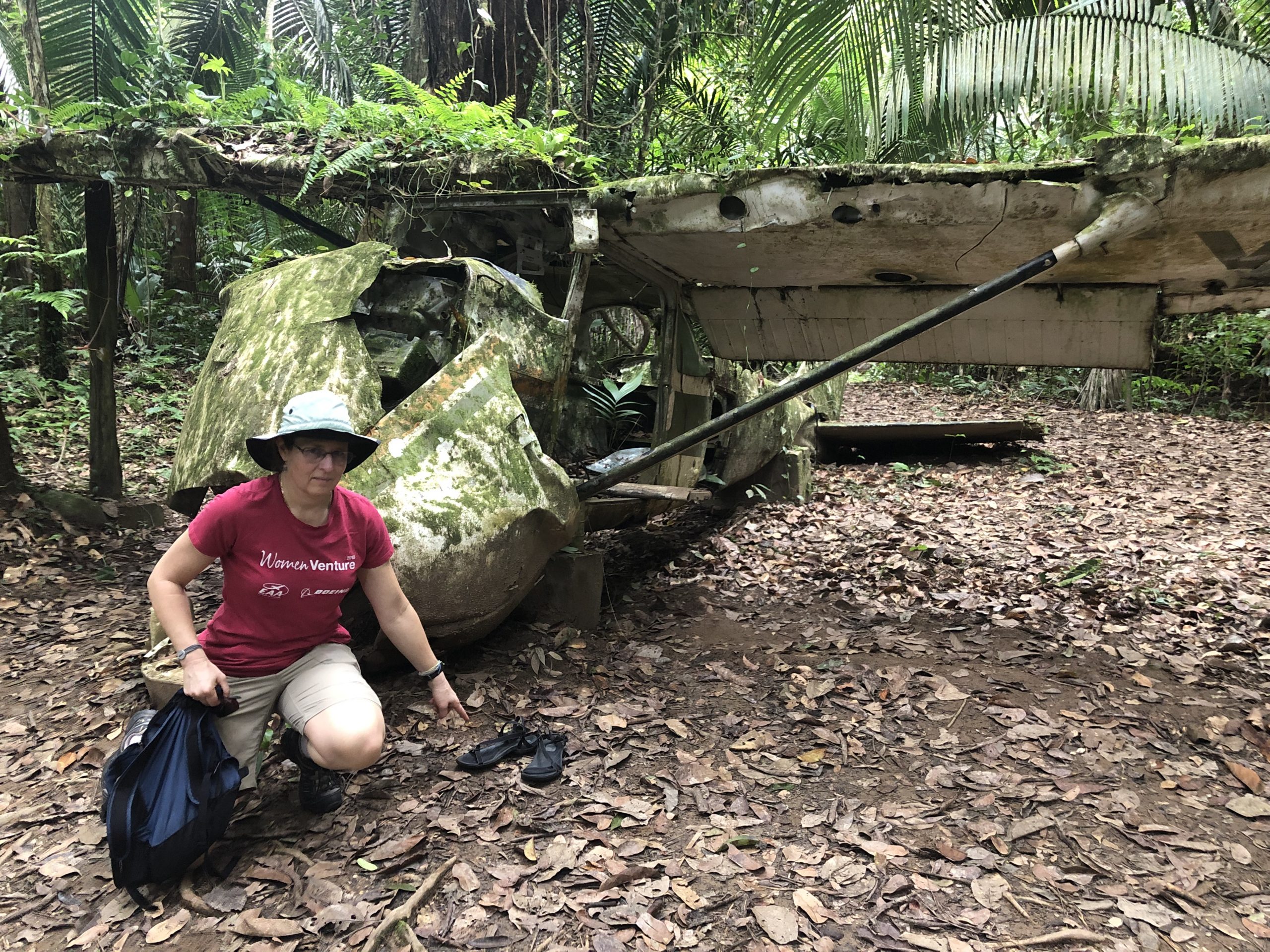 It’s late January 2019 and like many of you, I’m surviving winter, even tolerating it relatively well considering my Decathlon hasn’t been airborne in at least 10 days … and that means I haven’t either. Withdrawal set in a few days ago and I’m cursing the cold, the snow, the rain, and some unusually strong winds. Thank you to some LadiesLoveTaildraggers members for brightening my day with emails and texts. 🙂

LadiesLoveTaildraggers’ members Kelly Jeffries, Val Slocum and Jamie Swihart are in Belize and are surely a whole lot warmer and more comfy than most of us. Kelly reports they’re having fun but when it comes to general aviation it’s not the place to be. Apparently you have to fly to Belize City in order to fly anywhere and they rode on a Caravan from there to their destination.

With tour guides Val & JimBob Slocum leading the way, sounds like they didn’t waste any time doing a little general aviation crash site investigating. In 1983/1984, Dr. Alan Rabinowitzâ€™s single engine plane crashed when its wing clipped a quamwood tree while taking off from the landing strip in the Cockscomb Basin. The plane was used for air monitoring of jaguars he captured and placed radio collars on, then released for his two year study of jaguars in the Basin. The crash was caused by a local thunderstorm and heavy rain. Dr. Rabinowitz, a photographer and the pilot all received minor injuries.

And when they’re not hunting down 35 year old plane crashes they’re keeping happy visiting nearby destinations like the Cockscomb Basin Wildlife Sanctuary and Jaguar Preserve.

Val tells me, “today we kayaked, and then rode bikes to the beach club where Kelly taught an Aqua Zumba class!” (FYI, like previous years, Kelly will surely be leading us in a Zumba class at the upcoming 2019 LadiesLoveTaildraggers 2019 flyin!!)

Oh baby, if this doesn’t make you want to head south nothing will! Val says “Tomorrowâ€™s adventure, Red Bank to see the Macaws, Spice farm and Botanical gardens and some Mayan ruins, Nim Li Punit!!”

Belize. Looks like a lovely place to visit when it’s cold and snowy up north. I did look into GA there and see there’s at least a tiny bit. The first thing that comes up on an internet search could be better but I’m not discouraged. Glad to read the acting prime minister escaped unhurt in this 2017 plane crash.

From News 784: “Seven passengers who were on board a plane that crashed here Friday all escaped unhurt and were rescued from the sea.  There have been varied reports over whether one of the barriers at both ends of the runway was lowered to prevent the accident from happening. Normally, both barriers are lowered whenever planes touch down or take off to prevent vehicular traffic from passing in front of the runway during those times. A witness reported that on that particular day, only one of the barriers was lowered, however, the Northern barrier was not lowered, resulting in the free flow of vehicular traffic in front of the departing aircraft. In its press release, Tropic Air stated that the Belize Airports Authority (BBA) and the Belize Department of Civil Aviation are conducting an investigation to determine how the vehicle passed in front of the departing aircraft as the BAA had placed both barriers and signage in place to prevent such occurrence.”