Aviators have the biggest hearts! 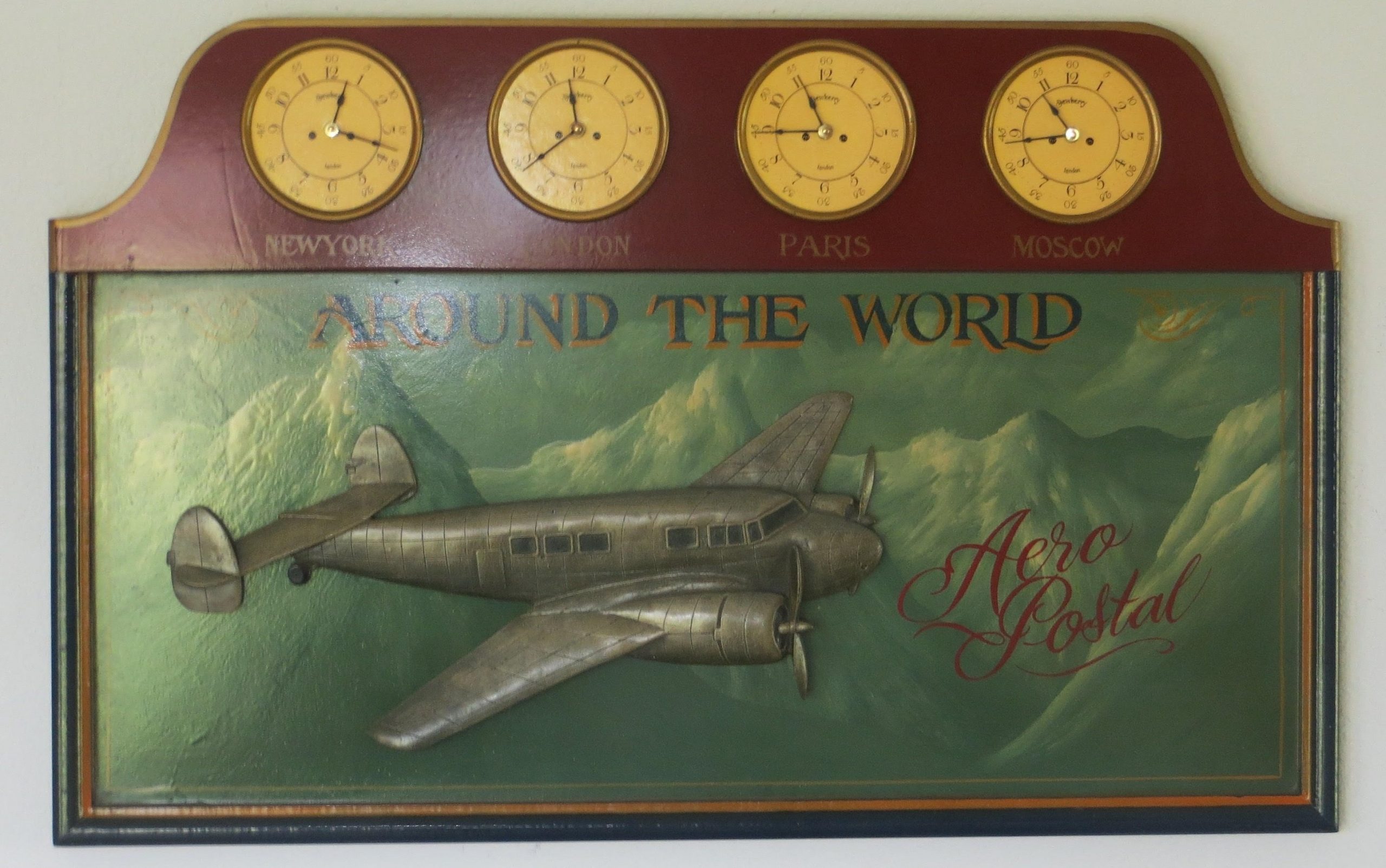 May 2018 Aviators have the biggest hearts!

I often say pilots are the greatest people on earth. From personal observation I can tell you they are smart, resourceful, funny as hell, often times driven, and best of all, kind. If you’re a fellow pilot and have a problem, just say the word and help is on the way. Need some advice about flying anything with wings on it? Oh baby, stand back ’cause the floodgates are about to open. Aviators have all the answers, whether you want to hear them or not, but don’t ever doubt it – aviators have very big hearts.

One accomplished and well known lady taildragger pilot sent me evidence of that today. Ann Pellegreno, based on a grass strip in the Dallas/Ft. Worth TX area, flew around-the-world in 1967, 51 years ago this July. She and her crew’s 1967 mission was to complete the flight Amelia Earhart & Fred Noonan began 30 years prior, in 1937 — a 28,000 mile journey, circling the equator in a sister ship to the one Amelia flew, a Lockheed, Electra. 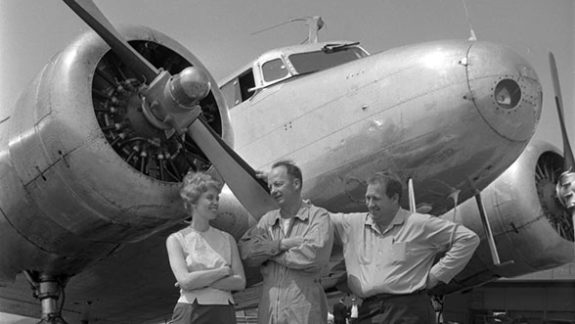 They accomplished their goal, even overflyingÂ Howland Island exactly 30 years after Ameliaâ€™s disappearance, slowing to drop a wreath from the cockpit window in their honor. 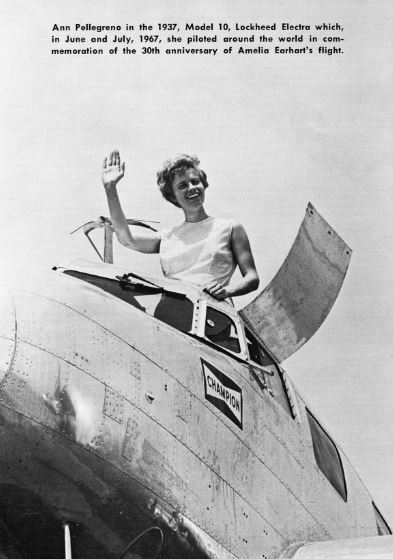 It’s been over 50 years since Ann’s now famous flight and she is still in demand as a guest speaker. In late March, Ann & her husband Don traveled toÂ Mettetal Airport,Â Plymouth, Michigan to speak to EAA Chapter 113 about the flight. 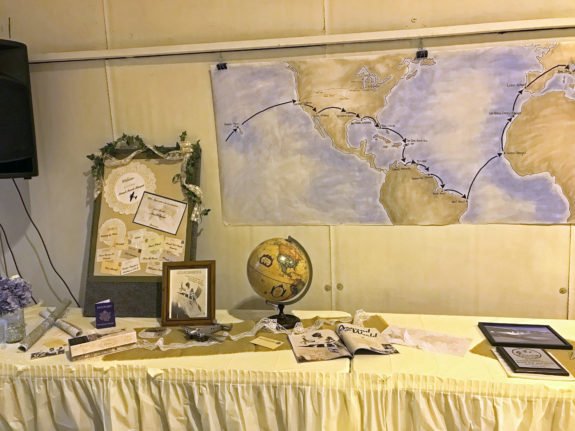 EAA Chapter 113 Welcome table. Note to EAA members, this chapter knows how to do it right! 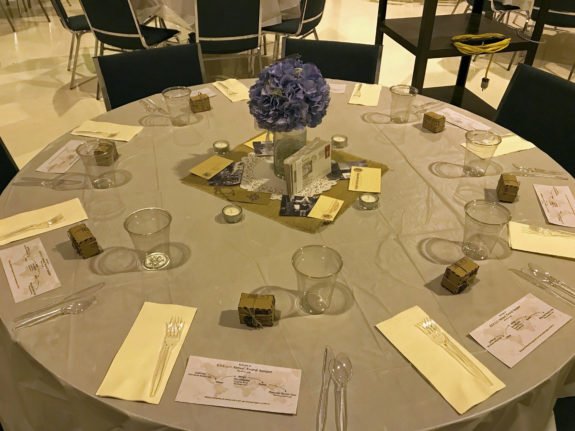 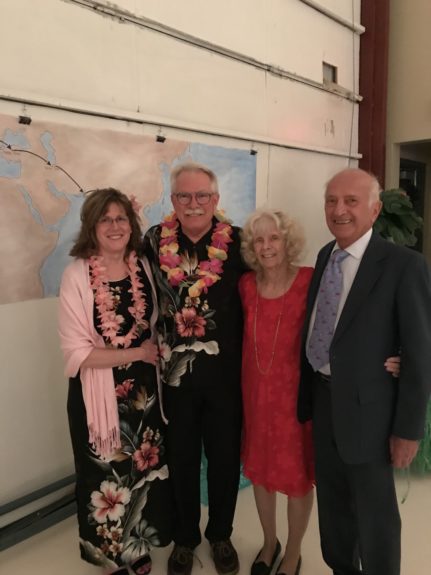 Besides what Ann reports as “the best buffet ever”, the evening included a silent auction fundraiser. Wow, it blew me away when I saw what had been donated anonymously to the auction – an “Around The World” time zone clock made by the Dewberry Corporation, amazingly featuring a Lockheed 10 Electra. (Ann commented “maybe with traces of the Lockheed 12 and Lockheed 14!”). Seriously? Who in Michigan would happen to own this thing, let alone donate it to this specific fundraiser? It was meant to be! At 36″ w x 24″ h, it was a heavy, sizable piece from the ’80s. Ann was determined to win it! 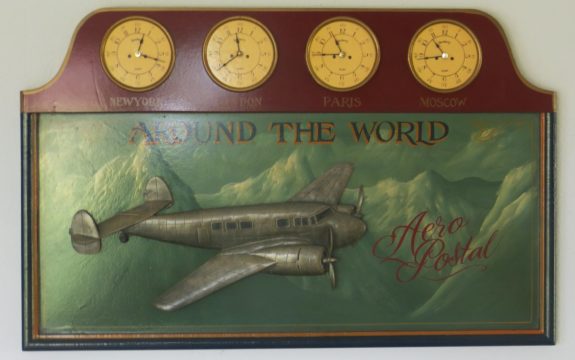 Seriously, what are the odds of someone affiliated with this EAA chapter even owning a clock with a Lockheed Electra flying round the world, let alone donating it? Ann bid on it, and waited. I suppose it’s not surprising that she won it. Heck, would you bid against the woman who successfully flew one just like it around the world 50 years ago?! Not I.

And this is where aviators being the greatest people in the world comes in. Ann won it for a tidy sum, probably a lot less than it should have sold for, and when she tried to pay for it, she was told “someone” had already paid the bill for her, also anonymously. Now that just makes me happy! 🙂

Ann had it shipped to her home in Texas where she says “it will go by my tv chair in the corner where I can pet the carved wood plane”.