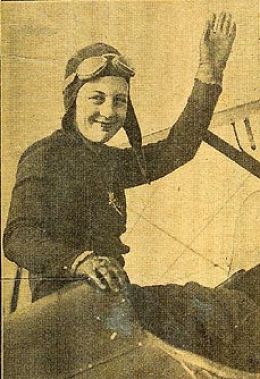 Aviatrix Bettie Lund grew up in the very early days of aviation. While flying was romantic and daring in 1929, pilots frequently lost their lives. 1929 was the year Bettie met her soon to be husband, stunt pilot Freddie Lund. After graduating high school, she followed him around the country as he barnstormed and did aerialÂ stunts from 1929 to 1931.Â Along the way Freddie taught her to fly.

In the publication “Science and Invention”, Bettie tells how she did 67 barrel rolls in 28 minutes, setting a woman’s world record. Bettie says, “Prior to this record-breaking flight in Miami (my fourth solo), I had only 20 minutes to my credit in the air, alone, and I had never performed any stunts. But my husband, Freddie Lund, was the first pilot to perform an outside loop in a commercial airplane, and he had taught me to fly, and taken me around. So, I felt quite confident.”

Freddie Lund was killed while flying a Waco Taperwing during an air race in 1931. AndyÂ Heins says of Lund’s demise in this airplane, “He died on October 3, 1931 in Lexington, KY at Halley Field. He was participating in a pylon race when C. B. “Scotty” Burmood [not a Register pilot], flying a Monocoupe, pulled up into Freddie while rounding a pylon.

The tailskid of the Waco went through the top of the fuselage, damaging theÂ main spar. The prop of the Monocoupe completely cut off the tail of the Waco just forward of the horizontal stabilizer. The Waco pitched up and then rolled and Freddie bailed out but was too low for the chute to open properly. The Waco hit the ground and burst into flames immediately and Freddie landed about 200 yards from the crash. Burmood was able to make it back to the airport and land safely.”

From newspaper: Â Bettie Lund’s husband, noted stunt flier, Freddie Lund, was killed in a crash at Lexington, Ky., on Oct. 3, 1931. He had promised to participate in the Jersey City Air Show for unemployed. Here’s flier who will take his place. . . Mrs. Freddie Lund, his widow. Carry on!

Soon after, Bettie went out and bought herself a Waco Taperwing, painted it red, white and blue like Freddieâ€™s, and began her own solo career. By the late 1930â€™s she was one of the countryâ€™s top stunt pilots.

Bettie served as a WAF during World War II and transported airplanes from the manufacturing plants on the west coast to the east coast where they were Â transported to Europe.

Bettie Lund and her dog Spin