Back home in Indiana!

Good news! My Rans S7 is finally in Indy and tucked into its new hangar!! I’m happy as I can be today but you may not have recognized me yesterday, the day I figured out how to fly it and brought it home. It was one incredible roller coaster ofÂ emotion day; elation…. anticipation…Â anxiety…Â excitement… nervousness… and that’s just the beginning! Oh the joys of airplane ownership.

Even though I was hoping for blue skies and warm temperatures for my “figure out how to fly it and get it home day”, Manoquia, Wisconsin was cold, had a dusting of snow and low ceilings in the morning. I started out taxiing it around and all I can say is, visualize a big ol’ shopping cart taxiing around and toe brakes instead of a rudder . It’s got 6 little wheels and they wanted to slide across the dusting of snow and weren’t always interested in heading the direction I wanted to go. 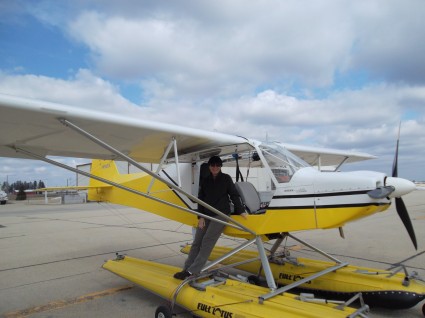 Fuel stop at DeKalb, IL on way to Indy. "That guy sure nailed the landing", comment made by a couple guys on the ramp before they saw a woman get out of it. Of course I got a kick out of hearing about that one! Â 🙂

The first couple of landings I had an overwhelming urge to pull the power, flare and do a full stall landing and that’s a bad idea. By the third landing I was figuring it out – left some power on and flew it in flat and raised the nose ever so slightly right before touching. Â Amazing – it worked! I did a few more touch & goes getting a better feel for how it flies and waited for the ceiling to come up to 1,000 agl. By noon I was off and on my way for my 500 mile southbound trip home. 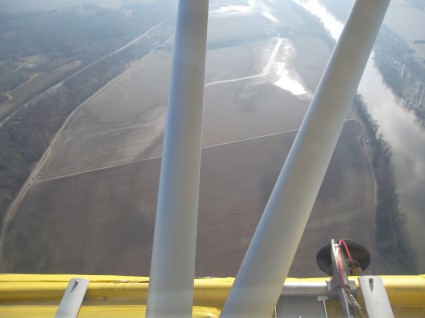 I flew out of the low overcast somewhere around Wausau and had a little tailwind to boot. I had to stay low that first leg of the trip but was happy to climb a little higher when the weather started clearing further south. At least I was happy till a cloud layer decided to form at 2,000′ agl and the updrafts and down drafts started picking up. Talk about getting beat to heck, I had a good couple hours where I was hoping those boats hanging underneath me (make that floats) were hanging on there tight cause I was sure getting tossed around and didn’t want to lose them on the way. Luckily, the bumps eventually eased up and my new little buddy and I got to spend some quality time together over the flat farm lands of Indiana.