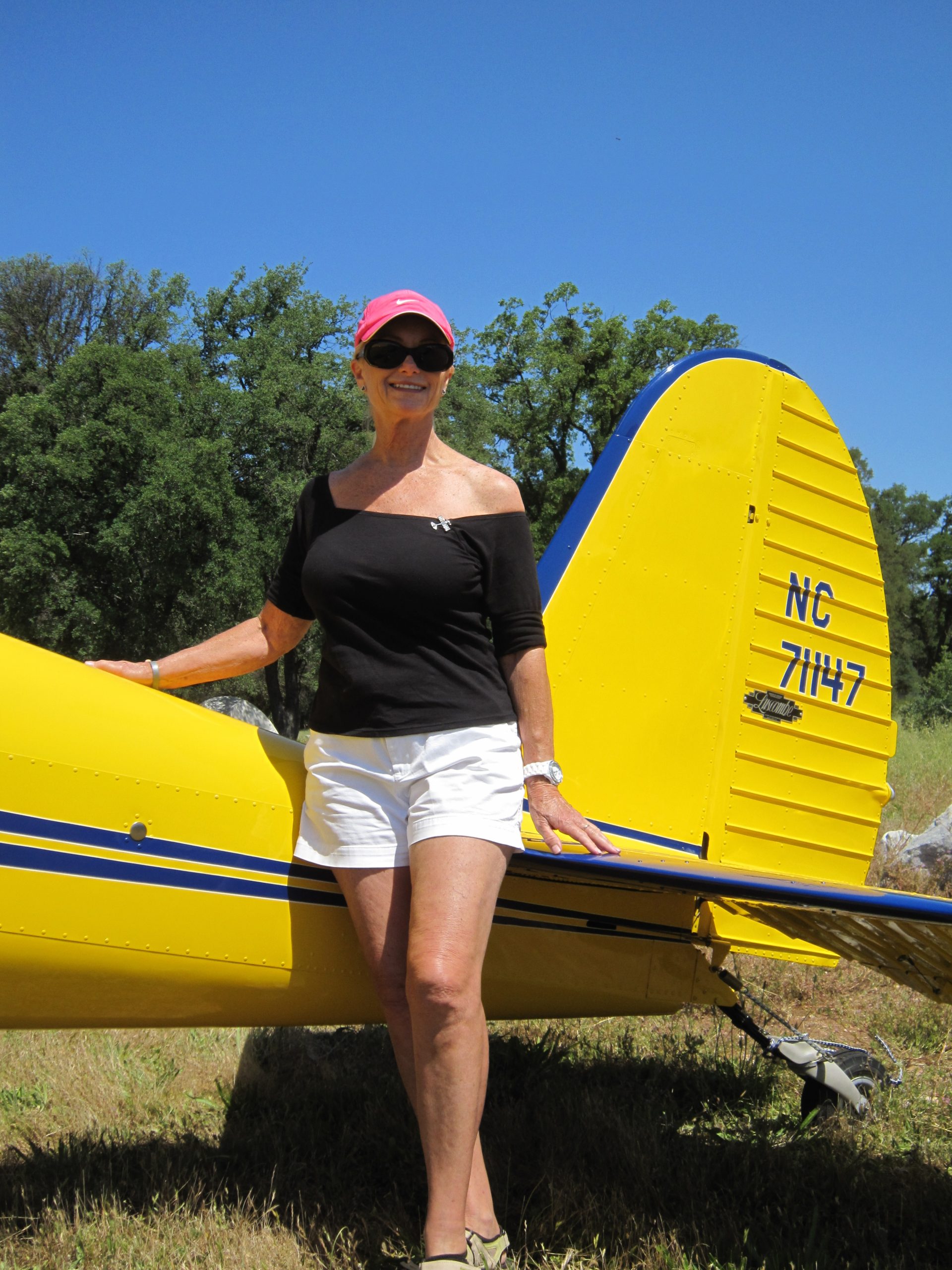 Barbara Kirmsse us based at KRIR, Flabob Airport,Â Riverside, California. 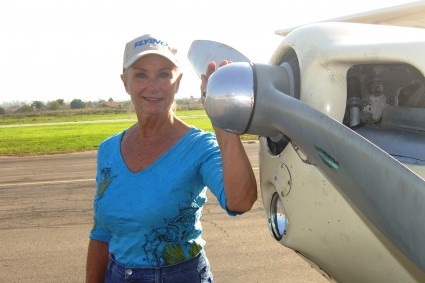 My Friend The Champ

I am Barbara Kirmsse, 67 years young, live in Alta Loma, CA and learning to fly a tail dragger. Â Having never flown before it is a huge challenge to say the least. Â My first dreams of flying began with my father when I was just a little girl growing up on a farm in Iowa. Â My dad never became a certified pilot but he is a pilot at heart. Â He served as a flight mechanic in the United States Navy and has many stories to tellâ€¦…always with a sparkle in his eyes. Â As he was teaching me how to drive the tractor on our farm, Â he was also instilling in me the love of flying. Â One of my favorite stories is about a student pilot and his instructor. Â On the student pilotâ€™s first day behind the stick in the air, the instructor illustrated how to roll the plane overâ€¦.the instructor had forgotten to fasten his seat belt, fell out of the plane when it was invertedâ€¦luckily had his parachute on and escaped unscathedâ€¦.meanwhile the student found himself on his first flight upside down and no instructor in the plane! Â He managed to right the plane and land it! Â Keep in mind the trainers were not equipped with radios!!! 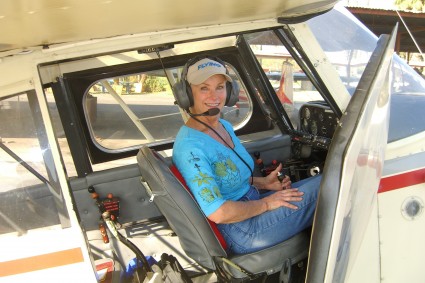 Twenty three years ago when I was 43 and happily married for 25 years my husband died suddenly of heart problems. Â Life must go on but I have never remarriedâ€¦..waiting for someone really special! Â My two beautiful children are both happily married and are living near me. Â I also have two fantastic granddaughters, 12 and 20. Â Six years ago I retired from 30 years with the Alta Loma School District and never looked back. Â During my years with the school district I also did runway and print modeling just to mix it up! Â  I now take piano lessons, practice at playing golf, and I am learning to fly the Champ! Â Three years ago I reconnected with a high school friend at a reunion. Life is good! 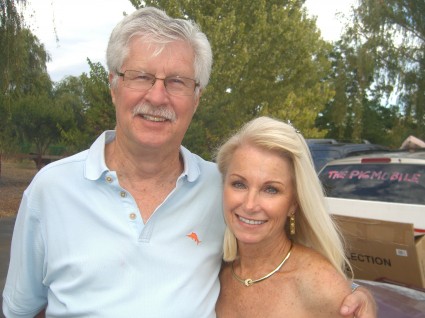 My Bill, My Inspiration

Bill flies a Bonanza A36 and has been a private pilot since his 20â€™s when he purchased his first of two planes. Â Bill also has an endorsement for a tail wheel. 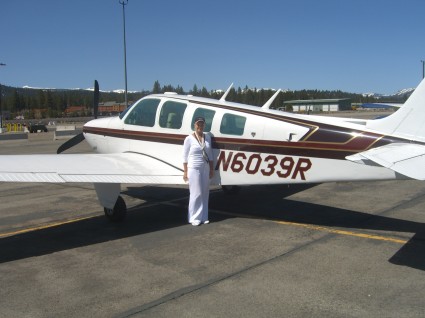 Â I love flying and just wanted to learn some basics to land the Bonanza in case of emergencyâ€¦.Bill said why donâ€™t you get your private pilotâ€™s license? Â I expressed to him that I didnâ€™t think I could do thatâ€¦..his response was â€œOf course you can, you just to have to say you are going to do it â€¦..and by the way why donâ€™t you learn in a tail draggerâ€! He is my greatest supporter and mentorâ€¦..without him I never would have dreamed that I could accomplish such a feat! 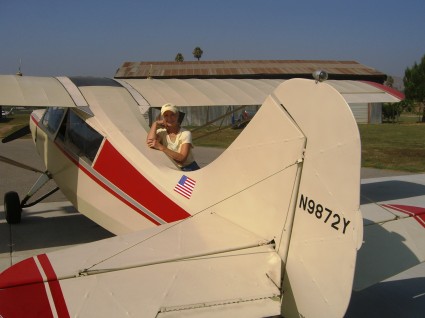 We have gone across country three times to the Bahamas, Sun n Fun, New Orleans, Key West, Albuquerque Balloon Festival and East Coast as well as many other flying adventures. Â We belong to three flying clubs. Â On our trip last August to Oshkosh and then, Maine to eat lobsterâ€¦.we had the great fortune of meeting President H.W. Bush (1941) in Kennebunkport. Â I am sending a picture taken by the Secret Service! 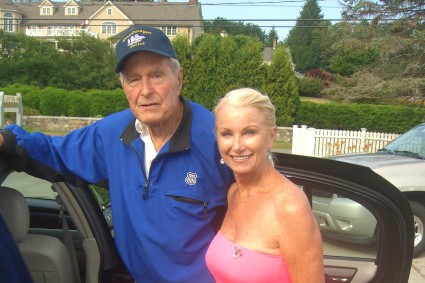 March 2011, I studied for my online, Private Pilot, Airplane ground school test using prepware.com and within two weeks I went to the Universal Air Academy in El Monte, California and passed my Private Pilot Airplane Airman Knowledge Test. I then took and passed my Third Class Medical and received my Student Pilot Certificate. It took two months to find an instructor with a tail wheel airplane for instruction. Finally we found a little airport in Riverside, CA called Flabob. They have an aero club with a Cub and a Champ available! 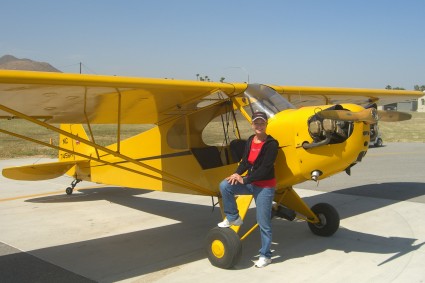 Love That Cub! The First Airplane I Flew!

Flabobâ€™s existence dates from 1925, two years before the Lindbergh boom. Â It is the seventh oldest surviving airport in California. Â With runway 06/24 (3200â€™ X 50â€™) adorned by trees on one end and a mountain on the other, it is a little daunting sometimes. Â You may find out more about the colorful history of this little family airport online. Â Just Google â€œFlabob Airportâ€ â€œThe little airport that time forgotâ€. Â It is about forty minutes from my home but I was ready and willing. Â You really have to want to do this to make it happen. 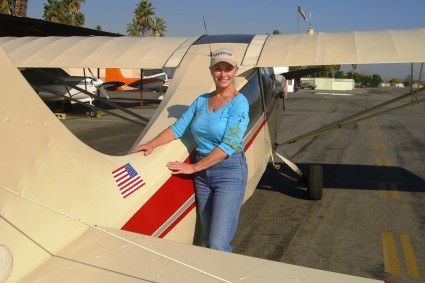 Love This Champ, Too!

I have 13 hours of training in the Cub and approximately 22 hours of training in the Champ. Â I am so close to soloingâ€¦.I can taste it! Â At the very beginning of my flight training, I told Walt Wasowski, my tail wheel instructor, that he would be a miracle worker if he could teach me to fly the Champ. Little did I know that getting it down the runway on the ground was the hardest part!!!! Â That tail just doesnâ€™t want to stay behind! Â We concentrated on fast taxis until my feet could dance the right tune and the light bulbs came on. Walt is so positive and is a great instructor, not to mention a very patient man!!! Â Guess what! Â He is a miracle worker, too, because I am learning to fly a tail dragger! Â At Waltâ€™s recommendation I had a check ride with another instructor, Jack, yesterday and he was impressed that when doing my 360 turns we experienced my propeller turbulence when I leveled out. Â Thatâ€™s a good thing! Â At the end of the ride he said a couple more consistent landings and I was ready to solo. Walt agrees!!! 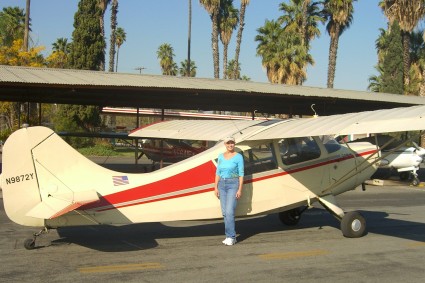 A Perfect Day to Fly a Tail Dragger in So Cal

I am so happy that flying is now a part of my life and that I have a very special man to share it with. Â We are now looking for a Luscombe to buy so we can fly side by side. Â Having a stick is a priority and we like the idea of both sitting together up front. 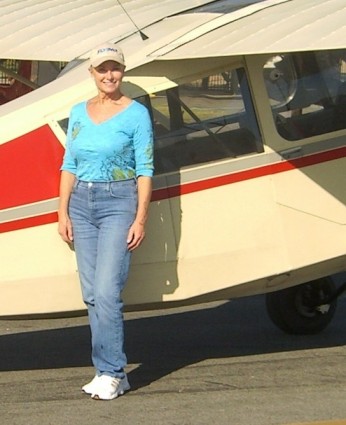 All of you tail dragging ladies are my heroines! Â I am in awe of your accomplishments and I love reading about themâ€¦.all of you are so inspiring!!!! Â You will be the first to hear as soon as I solo!!!!
Merry Christmas! Â You all know what I am wishing for. Â Even Santa chose to fly!!!!
Barbara Kirmsse