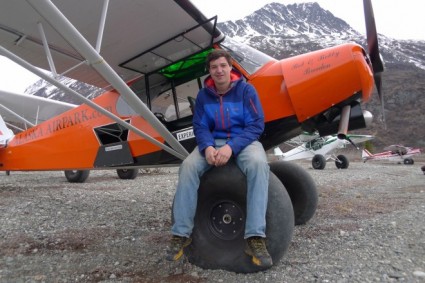 Here’s an incredible story from the “Alaska Dispatch News” you may not have heard. This video is of 17 year old student pilot, Bobbie Breeden, preparing for the 2011Â Short Takeoff and Landing competition at the Valdez, Alaska Fly-in. He’s flying a modified Super Cub with 210 hp and a light weight composite propeller. Watch it because the story begins here.

So what happens next? Bobby came in 4th placeÂ overall in the competition with a total distance of 101 feet – including the competitionâ€™s shortest takeoff distance of 36 feet. AÂ pretty amazing feat for a 17 year old student pilot from Virginia. But the story continues. The competition was in April 2011 and along came July 2011 and Bob & son Bobbie are on a several week flying trip around Alaska. They’re off flying the Wrangell Mountains having a great adventure and according to Bob, “discovering and landing new landing zones all day, mostly on glacier tops on exposed ice, below the snow level — which was still around 5,000 feet on the glacier top at this early date in July.” 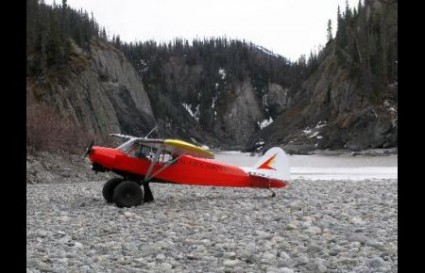 “At the end of the day, we landed in a wide river valley about two miles above where a glacier collided with a mountain wall, with the river cutting in between. We walked down to this point, safely along the mountain and well away from the glacier, to where a big blue glacier face stood opposite the mountain, and explored this spot for almost an hour, and took a lot of pictures. There seemed to be no threat, and even a comforting thought that any falling ice would easily be swept away by the swift river.” 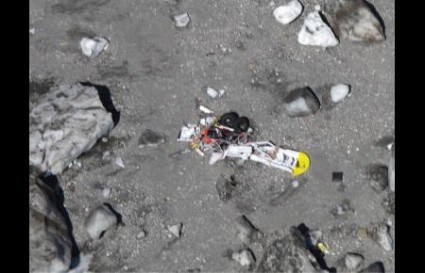 “There was a small gravel bar on our side of the river, across from the glacier — and we decided that we would bring the plane into the gravel bar for a photo.”

“Once there with the plane, we walked around and took some photos, but within a minute of arriving, we heard some crackling in the ice. Before we could get in the plane to depart, a piece came down and instantly displaced the river beneath it, creating a 3 to 5-second blast of sand and water, comparable to an explosion. It shot across the river at us. I dropped my camera while instinctively putting my hands over my face and turning my back to the spray and blast, which swept me up the sand and gravel of the river bank. The plane slid sideways 30 feet, and was crushed up against a stationary block of ice, knocking the gear off and smashing one wing and the tail. The fuselage was twisted and the fabric open. The water sluiced back into the river and all was quiet, less than 15 seconds after it started. We were soaked to the skin.” 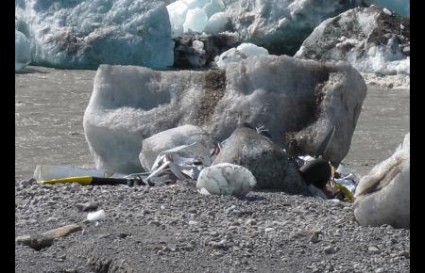 “We located each other and the greatest dread passed as I realized that Bobby was OK. We gathered our clothes bag, food, tent, sleeping bags, SPOT transmitter and satellite phone from the baggage area and got to safer, higher ground. We found a place in the sun but behind a boulder to break the breeze. We got out of our wet clothes into dry. After collecting ourselves, and perhaps 30 minutes after the event, we tried calling Donna Claus at Ultima Thule Lodge. Not reaching the Lodge right away, we also tried Dave Calkins to let someone know in Anchorage that we would need to be picked up. Soon after talking with Dave, we reached Donna, and a couple of hours later Loni Habersetzer, whom we had talked with earlier in the day, came and picked us up.” 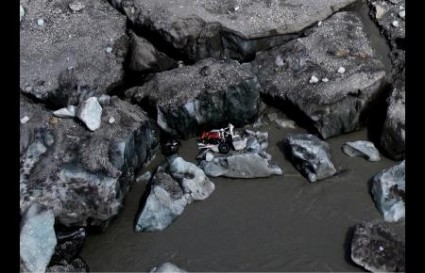 “The photos here were taken after the initial event. What you see here is much different from the day of the incident. As new ice continuously fell, the river bed changed as well. The original gravel bar was strewn with large ice blocks. As the glacier continued to calve, large blasts of water continued to alter the riverbed and batter the plane. You can see why the plane could not be retrieved once the glacier became unstable.” 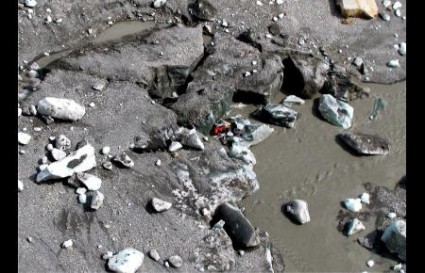 “10 days later, the plane had been moved 100 yards by continuous blasts of water from the calving glacier. The entire glacier had advanced far enough that when large pieces tipped over, they landed directly on the plane.
I got word from my friend who flew over the site on Aug. 7, more than a month after the incident, and he said that the terrain has changed so much that it was entirely unrecognizable from what it looked like the day the incident occurred. The glacier has advanced and covered the original site. There is no trace remaining of the plane.”