Checking in from AirVenture 2018

It’s high time I checked in from THE BIG SHOW -Â  AirVenture 2018! It’s been a crazy-busy couple days since touching down on 36 Right just before they shut down arrivals for the day on Sunday. Instead of Indy, this year my flight to OSH began at Atchison, Kansas where I’d just attended the Amelia Earhart Festival. At Festival end, I found myself there car-less and airplane-less and needing a hero to get me to OSH. Bet you can guess that hero was Boyd flying his RV7!

We spent part of the day at our alternate airport hanging out with a lot of other very frustrated pilots. KUNU, Dodge County Airport, 34 miles south of OSH.

Turns out the 397 n.m. flight, at a true airspeed of 145 knots, took us 11 HOURS.Â Much of that time was spent flying circles in a holding pattern around Green Lake due to heavy arrival congestion at Oshkosh. Mass formation arrivals combined with the first decent flying day out of several prior days, turned Sunday’s arrivals into mass chaos. Fisk controllers were clearly overworked and frustrated at having to send hundreds of aircraft back around for yet another try. Pilots were frustrated and nervous at repeatedly circling Rush or Green Lakes while trying to maintain 90 knots, 1800′ agl, and one mile spacing, constantly dodging aircraft flying at random altitudes and air speeds. Suffice it to say, it was a zoo. I’m happy to report we were one of the last aircraft who made it to OSH before they shut down arrivals for the day on Sunday. We are here!! 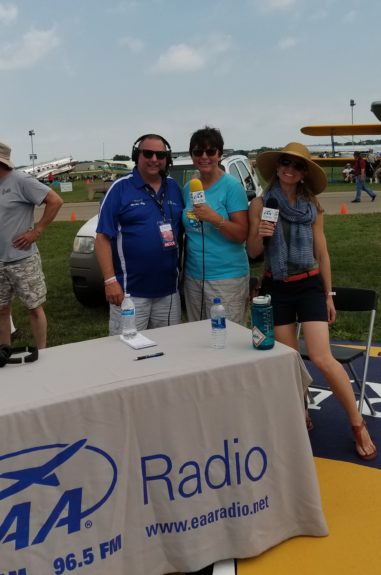 It’s always a busy week and we hit the deck running! Monday, Heather Penney and I were invited to talk about LadiesLoveTaildraggers and her military flying experience on EAA Radio. Heather’s a gifted speaker and she nailed it!

Woohoo, we lucked into another year of prime parking at OSH! Our RV7 is tied down next to the taxiway where everyone likes to gather to watch the afternoon airshows.

B-1 Bomber at show center

Lady taildragger pilot Amanda Noll was nearby while son and hubby Jason had the best seat in the house!

Alyssa Cobb with AOPA has the happy job of greeting taildragger lovers who wonder by and check out the AOPA Sweepstakes’ Supercub.

I’d say the LadiesLoveTaildraggers Tuesday lunch at the Tall Pines Cafe was a huge success. Many thanks to all who came and special thanks to Steve Nesse and his volunteers for providing the space and the great lunch.

90 or so Lady taildragger pilots and their friends showed up to meet and mingle and chow down on fresh Wisconsin super-sweet, sweetcorn and hot pot-roast sandwiches.

Thanks to Jill Manka, I had the incredible good fortune to fly in this 1929 Travel Air on Tuesday.

Not one but two Travel Air’s. Ours was an amazing flight of two!

This was no ordinary airplane ride. We were in an open cockpit 1929 Travel Air that is drop-dead gorgeous. It was a ride filled with graceful swoops and turns, a ballet in the sky, following a sister ship through the air.

Many, many, many thanks to Jill Manka and Richard Zeiler for a wonderful flight.

Half the fun of coming to AirVenture is seeing quirky designs. This Cricri MC15 with twin, 2-cycle, single cylinder engines leads the pack! (Cricri translates cricket)

We were unlucky enough to visit the ultralight field just in time to witness this Just Aircraft STOL Highlander depart and crash at the northwest end of the LSA strip.

It was horrific to witness the accident but I understand both gentlemen escaped with just a few bumps and bruises. The aircraft was a total loss.

And finally, a little test. Leave a comment if you know what classic taildragger this panel is from.