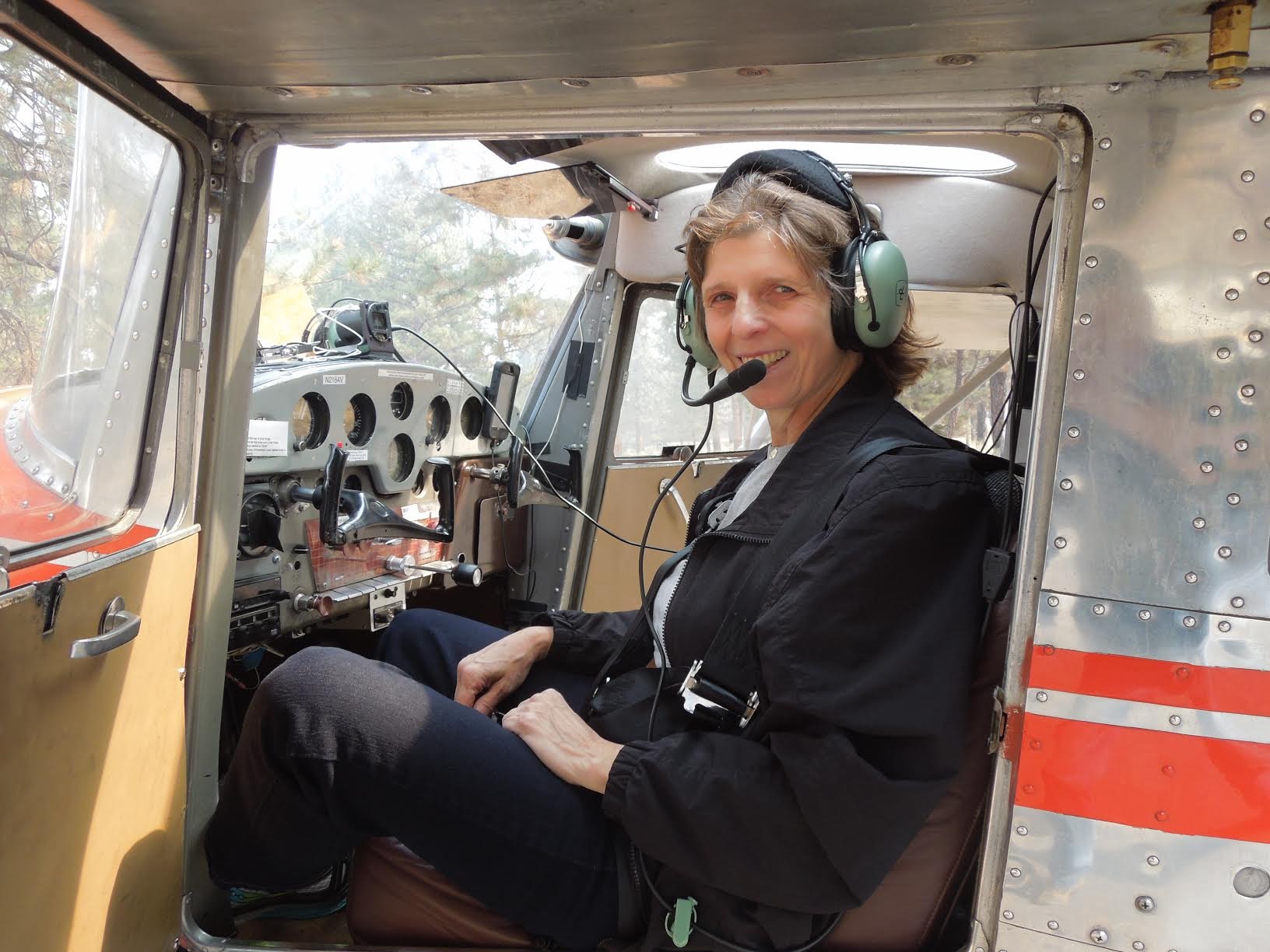 I’m very happy to report that one of our 2017 LadiesLoveTaildraggers’ scholarship winners, Claudia Childs, recently completed her training and is a newly endorsed tailwheel pilot. Congratulations Claudia! From Hamburg, New York, Claudia is a retired Buffalo, NY police officer with Commercial and Instrument ratings and is a CFI. She traveled across the country to Oregon this September to earn her TW endorsement.

The LLT scholarship program provides tailwheel training to female pilots as well as advanced tailwheel instruction to LLT members. Training for this scholarship was provided by our friend Brian Lansburgh of Sisters Eagle Airport. Brian is the founder of The Tailwheelerâ€™s JournalÂ and is a highly accomplished pilot, sought after for his unique precision airmanship instruction style. 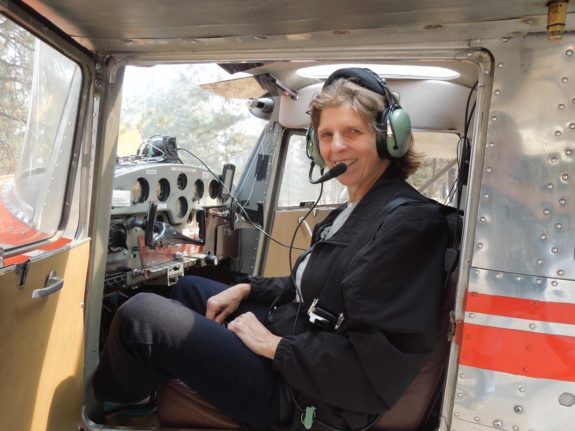 Claudia Childs followed up her flight training by writing this excellent article about the experience.

How thrilled I was to be one of the Ladies Love Taildraggers scholarship winners! I scheduled my trip for September. When I arrived in Portland, I thought that is was snowing. It was the ash in the air from the wildfires. I was concerned whether I would be able to fly in these conditions. Sure enough, the next morning the visibility was only 2 miles and we couldnâ€™t fly. However, CFI Brian Lansburgh made the most of our time together by allowing me to taxi up and down the runway a few times so that I could get the feel of a tail wheel airplane. It sure was different than tricycle gear taxiing. I felt like a student pilot, not a CFI. 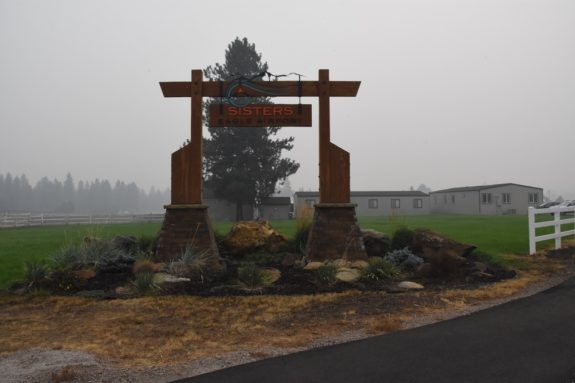 Sisters Eagle Airport with ash smoke in the background

After our taxi session, we moved on to knot tying. My father was an Eagle Scout and taught my Girl Scout troop how to tie several different knots at one of our meetings. I wasnâ€™t very good then and I certainly was no better now. Brian was very patient, despite my dysfunction. Cow hitches. Geez. 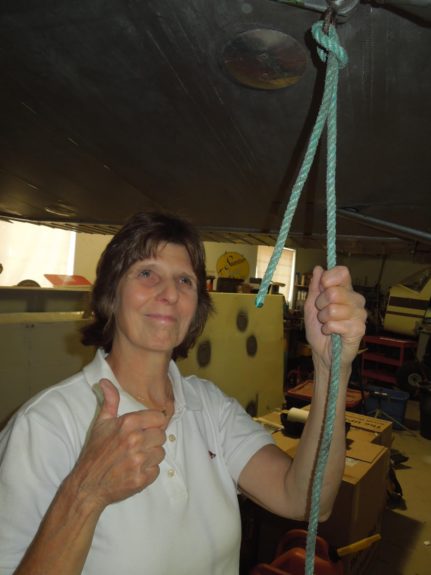 I have always thought that hand propping an airplane was dangerous and vowed that I would never do so. You guessed it, after the cow hitches came the hand propping. We had some discussion about how to do so safely and I did several dry runs. When Brian thought I was ready, there I was hand propping Brianâ€™s airplane Clyde. Hand propping. Geez.

The second day presented the same visibility, resulting in more taxiing and more knot tying. I met Spook the cat. We hit it off immediately. Spook helped me watch some videos to prepare me for the next lesson.

Day three finally brought some clearing, although it was still marginal. I have never flown over mountainous terrain. As with all good pilots, Brian always had a plan in the event of an engine failure.

We flew to an irrigation pivot. Brian told me that we were going to fly around the pivot at five feet above the ground. I wanted to get out of the airplane, but could not. So, I flew around the pivot a few times and decided that not only was it very precise flying, it was also fun. Irrigation
pivots. Geez. 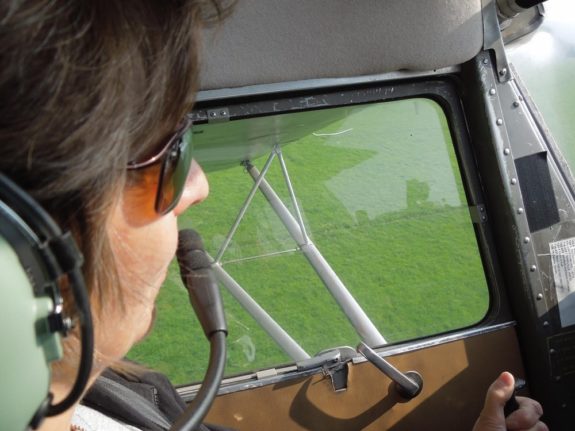 Next we headed to Madras Municipal Airport to the northeast and started practicing three point landings. Oh, these arenâ€™t so bad! I even managed one in which the tail wheel touched just before the mains. Ker-plop! This brought about a course of sea lion barking and applause from Brian, marking his approval.

The fourth day also arrived with marginal visibility. Over to Madras Airport we went to practice wheel landings and multiples. OMG. Wheel landings are harder than the three point landings. As a life-long tricycle gear pilot, my instinct on landing is to pull the yoke back. I needed new programming for the wheel landings. Bounce, bounce, bounce. Geez.

Brian and I took a break from the bouncing and visited the Erickson Aircraft Collection at the Madras Airport. What a wonderful museum! The best part was that Brian was my tour guide and explained many details about the airplanes and their histories.

The fifth day brought much better visibility and we worked on landing in a turn. Once again I wanted to exit the airplane. But, by this point, I was keenly aware of how good of a pilot and flight instructor Brian was and just how precise his flying is. I wondered why anyone would want to land in a turn except for being in an air show or some other demonstration. Brian shared the fact that once he lost an engine and had no option but to land in a turn. There you go. We also did slaloms in which we touchdown, lift back off, side-step to the other side of the runway and touch down again. So cool, so precise.

The sixth day we were together, we worked on the dreaded bounce, which I was really good at doing. We also took time out to look at fellow pilot Ron Copelandâ€™s experimental super cub. I was lucky enough to get a ride in it from AG pilot Chris Tatro. Wow, what great performance!
Chris is an excellent pilot. We did some low level maneuvers, flew into a canyon and easily performed a 180 to get out. Chris also showed me the art of crop dusting.

We returned to Sisterâ€™s Eagle Airport and Brainâ€™s hangar, where he signed off my tail wheel endorsement. What a whirlwind week. I did some awesome flying and made some new friends. I owe it all to the scholarship award from Ladies Love Taildraggers.

Upon my return to Hamburg Airport in western New York, my friend and fellow flight instructor, Bill Bauer, and I started negotiating with a â€œretiredâ€ pilot to purchase his J-3 cub. Keep your fingers crossed.

I want to express my sincere thanks to Ladies Love Taildraggers for making all of this happen. I also want to deeply thank Brian Lansburgh for his wisdom, hospitality, and humor. Also, thanks for sharing Clyde the Cessna 140 and Spook the cat! 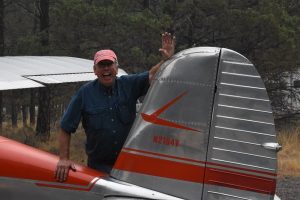 The Tailwheeler’s Journal: The flight instruction at Tailwheel town works because of how Brian teaches the maneuvers. Maneuvers like Slaloms and Landing in a Turn require that the pilot really control the airplane when itâ€™s both flying and touching the ground. Most pilots are just going for a ride during the landing experience. Tailwheel Town pilots are placing the aircraft exactly where they want it and are maintaining precise control during this phase of flight. At altitude, maneuvers like Alternating Sideslips, Sky Doodles and Dead Stick flight help the pilot advance far beyond simple coordination of the airplane. And, very importantly, Brianâ€™s philosophy that a flight instructor must teach and protect frees pilots to practice these unusual, challenging and fun maneuvers without once placing themselves in jeopardy.