What was I thinking when I left Indy without packing some rain gear? A cover up or an umbrella or a hat would have all come in very handy today! It rained overnight and was sprinkling when I got on the bus this morning and by the time the bus actually arrived at AirVenture 15 minutes later it was an out and out downpour. Luckily there’s a very small covered shelter at the bus stop so I made a mad dash to it and waited – and waited – and waited for the rain to stop. 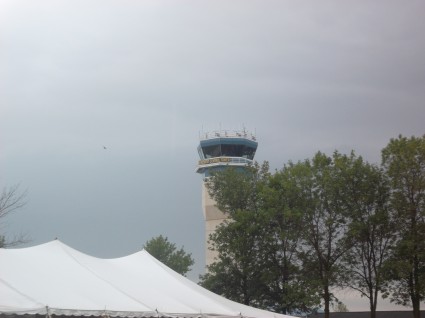 This shot was taken of the OSH tower early afternoon when the rain had stopped and things were starting to look a little better.

This was the morning we were scheduled to do the Ladies Love Taildraggers interviews in Vintage and I was supposed to be there, whether I looked like a drowned rat when I arrived or not! So even though it was pouring down I made a wild dash to the AOPA tent where they were kindly passing out rain ponchos to the masses – thank you AOPA! Â As it turns out, Ray Johnson and the EAA staff were already checking the radar and it was obvious an outdoor presentation was not meant to be on this rainy day. But that’s OK – we reschedule for tomorrow at 11:00 a.m. and that freed me up to finally get to spend some rainy day time in the vendor display buildings. 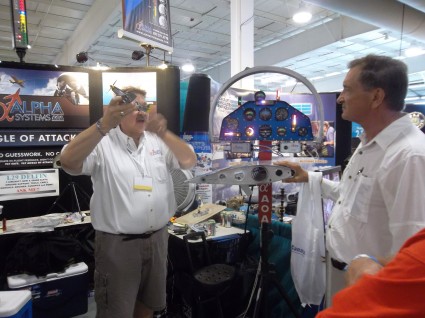 I've been thinking about an angle of attack gauge since I bought the Rans so I stopped by the Alpha Systems booth and heard how their electronic kit works.

I was also on a mission to evaluate headsets and find the one that best met my requirements and price point. I checked out the Clarity Aloft aviation headsets which came in at about $500 plus an extra $250 for a bluetooth feature. Next was Sennheiser who had a heck of a deal for $265 for their HME110 passive noise attenuation headset. I’d heard good things about it from a fellow woman pilot who won one last year at Oshkosh. Of course, I had to swing by Bose and see what they had to offer. All good but $1100 just seemed like too much to spend on myself for a headset. Next was Lightspeed Aviation who have great deal going for those that already own a Lightspeed and want to trade it in on a new one; $250 credit towards the purchase of a new headset and their Zula at $600 qualifies for the discount. 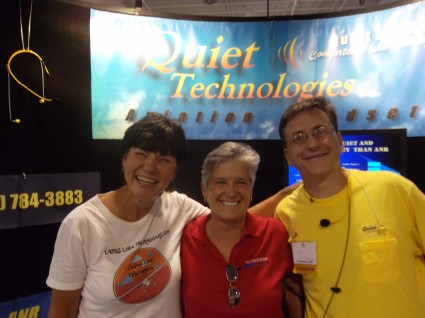 The last on my list to check out was Quiet Technologies

Take a good look at this picture; yep, you’ll see me on the left but if you don’t recognize the lady in the middle, it’s Debby Rihn-Harvey, 2006, 2008 & 2009 U.S. National Aerobatic Champion and just so happens, a customer at the Quiet Technologies booth while I was there. She just happened to stop in for what she considers to be the best headset to fly while doing competition aerobatics and performing in airshows. I got the biggest kick out of it when she put one of the headsets on and bent over and shook her head back and forth, up and down, to show how well they stay put during a performance, all the while being able to hear and speak clearly through them. She mentioned the competition Clarity Aloft headset which is priced much higher didn’t fit her and she was far happier with the Quiet Technologies “Halo” headset we were both looking at.

OK, so the thought process went something like this……Judy, you’ve looked at them all, you’re leaning towards the Halo headset already, Debby Rihn-Harvey loves them, flies world class aerobatic competition in them, performs wearing them ….. what more could you possibly need to make a decision?!! You guessed it. I am the proud owner of a new Quiet Technologies Halo headset and looking forward to my flight back home to put them to my personal test!!