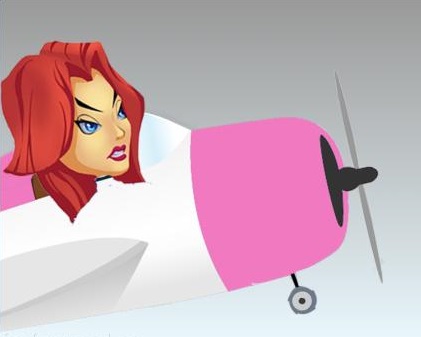 I can’t believe I’m saying this but here goes.

#1 People riding as passengers in aircraft, especially those who are pilots ….. be kind, be reasonable, and do not YELL at your pilot. And especially don’t pick an already stressful moment to do it. Your comfort level is not the only thing your pilot has on her mind. (His name will forever remain anonymous)

So what’s my beef? Today the sky was clear, blue, and cloudless, the wind was light and the previously cold temperatures were rising. Sounded like a perfect time to fly, so I did. I later decided a solo flight would have made me much happier but too late now.

I departed my airport on the far east side of Indianapolis late morning, destination Putnam County airport. GPC is 256°, 44 n.m. as the crow flies, with one big invisible obstruction between us, the IND Class C airspace. A direct line passes through their inner circle.  For such a short hop, I didn’t see any reason to climb the minimum 4800′ to request an overfly.  In fact, my preferred method of “getting to the other side” is to fly north or south around the outer ring then head west. It’s easy, un-stressful, and either direction, a beautiful flight. My passenger, a pilot, wanted to fly low under the circle, the most direct route, and being as accommodating as possible, I agreed. I’m not big on flying low over densely populated areas for 20 miles but I occasionally do.

Shortly after take-off he tells me he’s cold and to give him more heat.  I’m flying my Decathlon, he’s sitting in the back and can’t see most of my panel, let alone the heat off/heat on. I pull it out forcing more heat into the back but not so much to over heat him. Five minutes later flying low over town, he tells me to give him some more heat. Again, I pull it out further but not to the max since he’s wearing a heavy coat and I don’t want him to melt. A few minutes more, I’ve switched frequencies to EYE, a G.A. airport we’ll be overflying in 3 miles, and as I’m about to hit the transmit button, he YELLS “You’re pulling the wrong one, I’m still cold!”

Seriously, are you kidding me?!!! I was pulling the right one but that’s not the point. I yelled back at him to sit still and BE QUIET, then transmitted on 122.8. “Eagle Creek Airport, Decathlon 2.5 miles East at 1900′, will be transiting your airport midfield, looking for traffic”.

Which brings me to #2, Don’t lecture other pilots on the freq. After transmitting what I thought was a reasonable (and legal) announcement of my intentions, a male voice angrily came back with “That’s a very bad idea, very dangerous.” What? I continue while scanning the area. There’s a plane flying lower than me turning base to final about to land on 21, and the culprit, a Bonanza climbing out of 21, much lower and soon to be turning left crosswind. I was flabbergasted and itching to transmit back “You better not fly to Oshkosh!”, but I held my tongue and let it go. Someone did transmit “Bulls#*!”.  😉