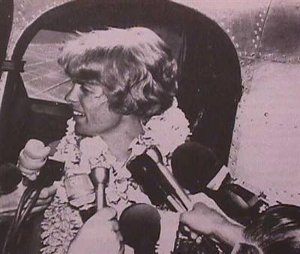 For those unfamiliar with Ann Pellegreno, Ann successfully retraced Amelia Earhartâ€™s 1937 attempted flight-around-the-world a mere 30 years after Ameliaâ€™s fateful flight. The year was 1967. She flew a Lockheed 10, a sister ship to the one Amelia had flown, and was supported by an all male crew.Â OverflyingÂ Howland Island exactly 30 years after Ameliaâ€™s disappearance, Ann descended and dropped a wreath in honor of both Amelia and Fred Noonan.

In March, Ann attended the Casa Grande Fly-In. Her 2017 calendar also includes a speaking engagement at the Amelia Earhart Festival in Atchison, Kansas, AirVenture week at Oshkosh in July, the Labor Day Fly-in of the Antique Airplane Association in Blakesburg, Iowa, and the Ladies Love Taildraggers Fly-In at Poplar Grove, Illinois, September 7 – 10.