Many thanks to Natalie McHaffie fromÂ Ontario, Canada for sending this gem of aviatrix history.

“Flight training could only be had in Canada through the military until 1927. Eileen was a member of the first class in the first civilian flight school. The text is from a display that opened last week during Women of Aviation Worldwide Week at the Canadian Warplanes Heritage Museum in Hamilton, Ontario, Canada. The rest of the display is about women pilots who have flown with the armed forces in Canada including the women pilots in combat in Afghanistan. The photo is of Eileen in her fur-lined flying suit. She learned through the winter flying from the ice on Hamilton Bay – pretty cold and windy.”

â€œCan a girl learn to fly?â€

With these words Eileen Vollick joined the first class in Canadaâ€™s first civilian flying school, J.V. Elliottâ€™s Flying service in Hamilton. She was taught piloting, navigation and aircraft mechanics. Since Eileen was only 5 feet 1 inch tall, she used pillows to prop herself up to see out of the cockpit of the ski-equipped Curtiss JN-4 or â€œJennyâ€ biplane.

Eileen was born in Wiarton in 1908 and moved with her family to Hamilton in 1911. By the age of 19, she was a textile analyst at the Hamilton Cotton Company and had also won a local beauty contest. She was a spirited girl who had parachuted into Burlington Bay before she started flying in late 1927. 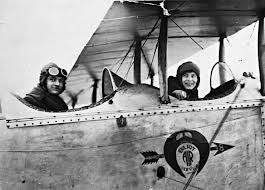 On 13 March 1928, after sixteen hours of flight instruction, Eileen took a day off from her job in order to take her federal aviation test. She demonstrated take-offs and landings on frozen Burlington Bay, performed five figure-eights and flew 175 miles cross-country. She successfully passed the test and was issued Canadian private pilotâ€™s licence #77 on March 13, 1928, the first woman in Canada to qualify as a pilot and the first woman in the world to be trained on a ski-plane.

Eileen soon became a celebrity. As well as many speaking engagements, she flew in the U.S. and Canada, often demonstrating aerobatic flying, which she enjoyed immensely.

With the attention given to Eileen Vollickâ€™s accomplishment and the introduction of more flight schools, there were soon a number of women pilots in Canada. These included Eileen Magill in Manitoba and Gertrude Laverne in Alberta in 1928 and a further 19 women across Canada by 1930. Â Until 1927 there were no civilian flying schools in Canada: only the self-taught and the military, men only, learned to fly.

Because Eileen Vollick was the first woman in Canada to make an application for flight training, Jack Elliot wouldnâ€™t take her as student until after the Department of National Defense gave its approval. Officials at DND took three months to endorse her application and stipulated that she had to be 19 years of age although the age requirement for men was 17.

Eileenâ€™s first instructor didnâ€™t want a female student so â€œAlthough it was against the rules, on my first lesson he did spins, loops and zooms thinking he could frighten me.â€ By contrast her next two instructors, Dick Turner and Len Tripp welcomed her as did her classmates, thirty-five men.

For the most part women were accepted in the new flying club movement. However, some were not even allowed to sign up for lessons while others found that the men applied a more rigorous set of rules or tried to scare them off.

For many student pilots, men and women, getting to lessons took determination. In Hamilton Eileen Vollick took 6 a.m. lessons through the winter before getting to work at 8:30. In Edmonton, Gladys Walker would take the streetcar at 4:am as far as it went, walk the rest of the way to the airfield, have her flying lessons and then walk and streetcar back in time to get to work.