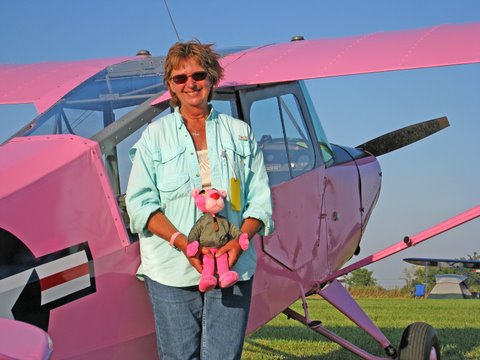 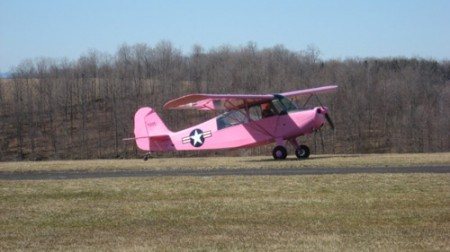 This Â happy, 1947 Aeronca L16A belongs to Elaine C. Huf of Kingsley, Pennsylvania (Identifier PS50). Â I got my private in 1968, and since then I have added Glider, Seaplane (in a 90hp Cub) and Instrument ratings. 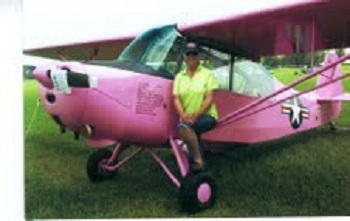 This airplane is a â€œkid magnetâ€ wherever I land, and there are always youngsters under the wings at any show! 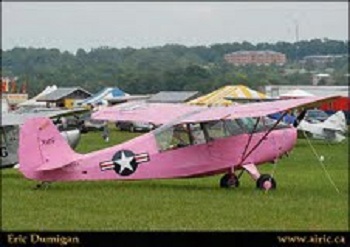 My L-16 was called â€œRudolphâ€ by the guys in the Army Air Corp. back in the 1950â€™s and it is actually in the logbook several places such as â€œRudolph in for brakesâ€ etc. 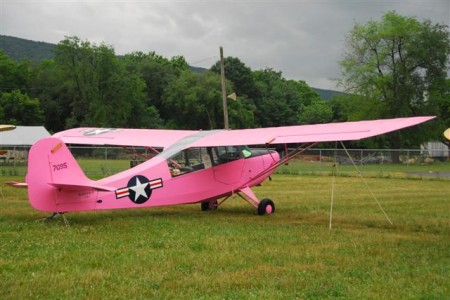 You gotta love Pink to fly this bird!! 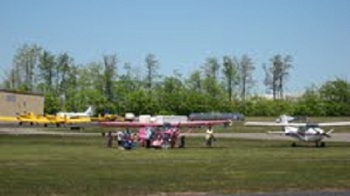 Once You see Rudolph, you just don’t forget! 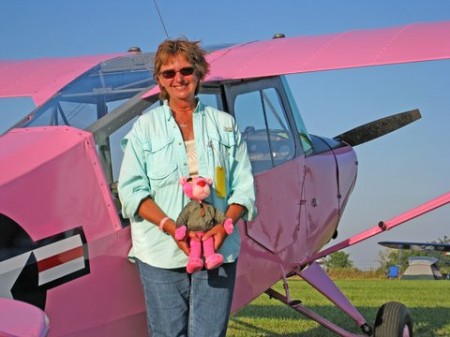 “As I was walking past row after row of delightful antique and classic airplanes at Blakesburg, Iowa’s 2007 Fly-in, I came across a Stinson airplane I have never seen before.Â  It was a cute, chubby little thing – like someone stuck a Stinson 108 in the dryer.Â  Checking it out, I noticed a “for sale” sign on the prop. . . . must be a guy, I thought, as the sign was made from the back of a beer carton and it was duck-taped to the prop.Â  After one hop in the “Baby” Stinson, I was sold, and contacted the owner to fly it to our farm in PA.” 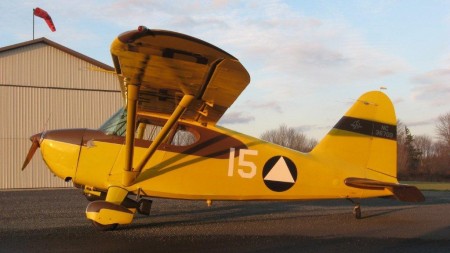 “This 1941 Baby Stinson 10A is the first of the Voyager series, seats 3 and has aÂ 90 HP Franklin engine.Â  She was drafted in WWII, designated as an L-9B (Liaison Aircraft),Â carried a one-hundred-pound bomb and one is credited for sinking an enemy sub off our Eastern coast during the war.Â  Several of these L-9B’s went to France right out of the Stinson factory.Â  We decided to put the original Civil Defense logo on the fuselage and wings and my husband crafted a fake “bomb” out of balsa wood for display.Â  After the war this Baby Stinson flew charter for both SANTA FE AIR TRAILS and OZARK AIRLINES, and has flown Corporate Executives for the COCA-COLA BOTTLING CO. of Southeastern Arkansas.Â  What a life she has led!Â  The previous owner restored the Baby in 1986 and we did a top overhaul on the 90 hp Franklin Engine last year.Â  At 5 1/2 GPH she gives us a range of about 750 miles, cruising at 108 mph. . . .take off speed is 55 MPH and landing speed is a gentleÂ 47 MPH.Â  The Baby is a fun airplane to fly, is pretty forgiving and tracks straight on the runway.Â  You have toÂ  be mindful of the tail in your turns, but she is as sweet as she looks.Â  Out of the 760 manufactured, only a handful are flying today.Â  I feel pretty lucky to have this “Baby Bomber”Â in our hangar.” 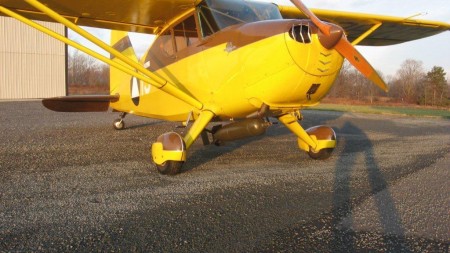 Of note, Elaine Huf comments that Ladies Love Taildraggers now has featured 3 gals that have a shared â€œhistoryâ€ of being published in Sparky Barnes Sargentâ€™s book â€œA HUNGER FOR THE SKYâ€. Â For more information please visit Â \â€A Hunger for the Sky\â€.

Visit the following link to read Elaineâ€™s article about her 2009 round-trip flight to Blakesburg.