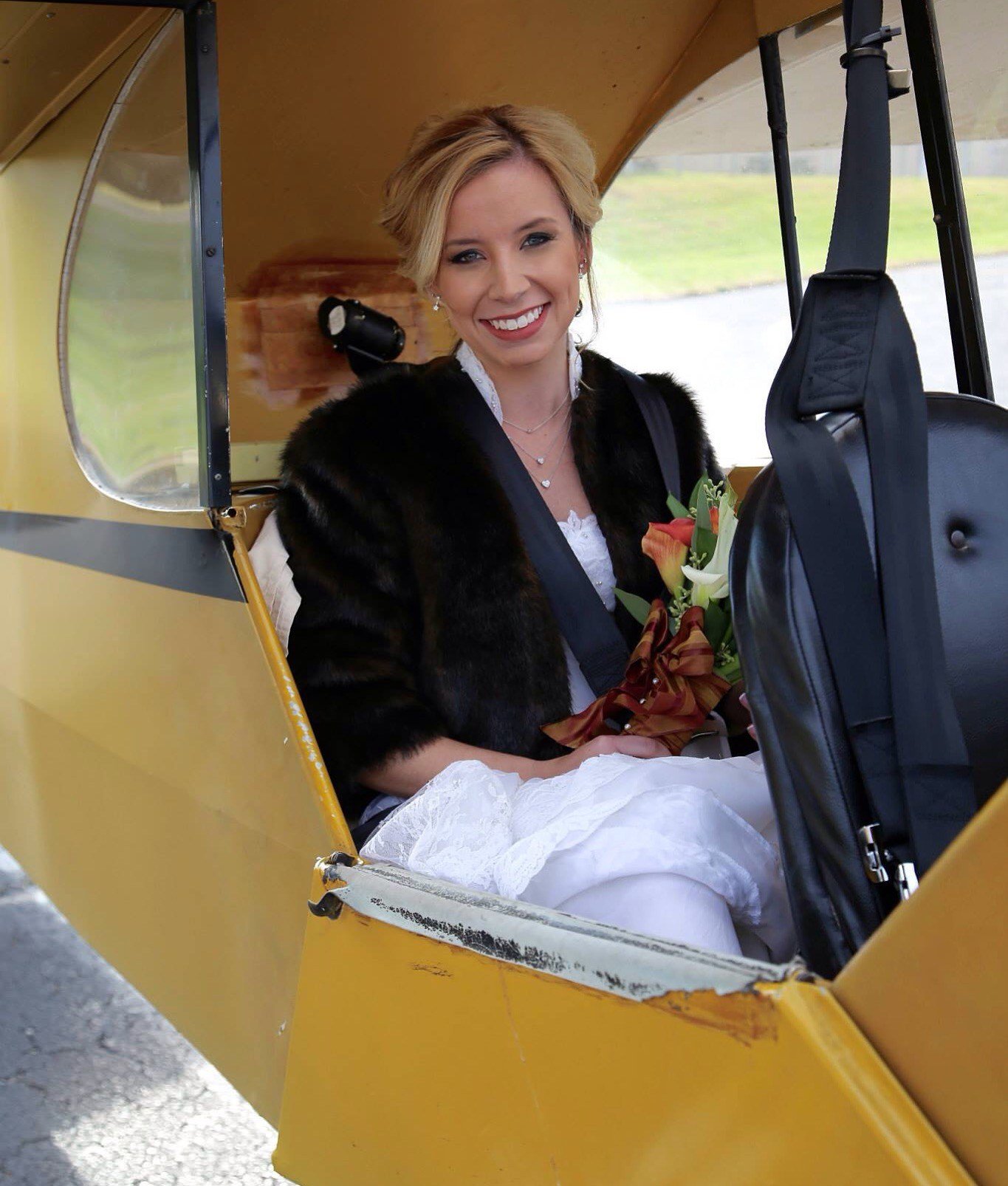 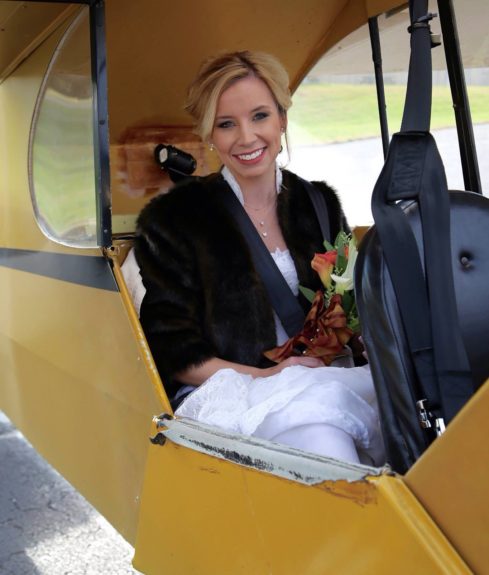 I’ve been flying since I was 14 years old. I’m a third generation pilot; my grandfather flew in WWII, and then started an airport in New Jersey, Cross Keys Airport. There he started a flight school, Lewis’ Flying Service, as well as a cropdusting company. He taught his children to fly, one of them being my father. When I was 12 or so, my father bought our family’s Cessna 172 to teach my two older brothers how to fly. When I was 13, I told my parents I wanted to be an aerobatic airshow pilot when I grew up, and I wanted to start taking lessons. I did my first aerobatics in a C150 Aerobat, and from there, I started to fall in love with aviation.

I soloed at age 16, and obtained my private certificate at age 17. January, during my senior year of high school, I took my mom out for lunch at a nearby airport, The Flying W, in New Jersey. At the time, I was working on my instrument rating, and as young high school student, my mom was the only person I could get to be my passenger! We flew into the airport on a very cold January afternoon, and unfortunately for my mom, I couldn’t seem to figure out where the heat was located in my airplane. Pulling up to transient parking, we saw these large Russian airplanes and several men in flight suits. My mom was immediately intrigued, and told me to go talk to them, and maybe they would take me up for a flight. I wasn’t a huge fan of talking to strangers, but I begrudgingly obliged. To my surprise, two of the “men” weren’t men at all, but looked to be right around my age, maybe a few years older. We got to talking, and one of them showed me inside the cockpit and told me about what they were doing (they turned out to be an airshow team doing a flight with a camera crew). They were flying Yak-52s, and my mom even got a photo of us on the wing of the airplane together. We ended up sitting with the two younger gentlemen at lunch, while the rest of the team went out on their flight. 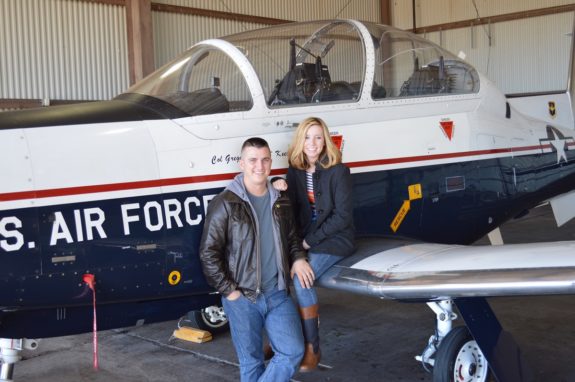 After lunch, we got to talking outside a little more, while my mom took some photos of the airplanes. It was at this point that I got a little bold, and asked one of the guys (the one I had been talking to the most), where the darn heat was in my little 172. He laughed, and showed me inside. It turns out, I had the air vents on instead of the heat (sorry mom!). He decided then to give me his phone number, “just in case I had any more questions about flying”. We talked for a few days after that, and got to know each other a little bit. His family had a cranberry farm in New Jersey. He worked in the NJANG as a crew chief, and was an ag pilot as well as being the youngest member on his airshow team. After getting to know each other, we stuck strictly to aviation, and drifted off from one another. We were both in relationships at the time, and I was heading to college that August.

Fast forward a few years, when I was in my second year of college. I get a friend request on Facebook from Austin Daniel (weird, I thought we were Facebook pals that entire time, but I accepted). I was getting ready to finish my college semester, and immediately after, I was going to be participating in the Air Race Classic. He messaged me on Facebook, and we caught up a little bit, and as it turns out, we were both single at the time. I had no interest in dating at the time (come on, I was going to go fly an air race soon!), and so we lost contact for a little bit. I touched base with him during my air race, just to let him know how it was going, as he seemed interested. He was on his very first trip at a regional airline, so we had a lot to talk about.

Shortly after my race ended, he asked me to dinner once we were both back in New Jersey. I accepted, and the rest is history. We began dating, and having aviation in common really helped give us something to talk about! He was still flying for the regionals, and I was finishing my last year of college, when he got the news he had been selected to fly the F-16 for the NJANG. Shortly after I graduated, we moved in together (our first home – the Greyhound Bus), and I worked on finishing my CFI. I was working three jobs; a meteorologist down in Maryland, an FBO receptionist at a local airport, and ground crew/mapper for my now-husband’s family cropdusting company. We were both busy, and the time for him to go away to pilot training was getting closer by the day. 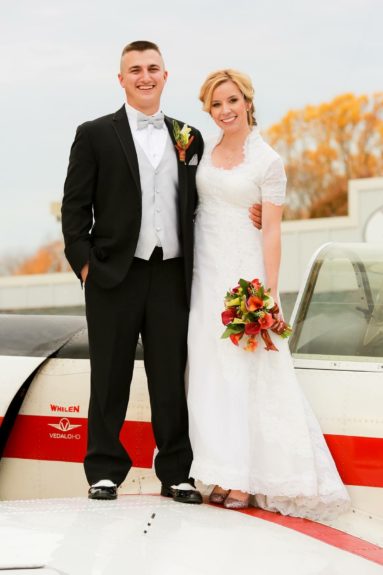 He asked me to move with him to Texas for Undergraduate Pilot Training, and my first response was a resounding, “No!”. After some more consideration, I decided, okay, maybe a traveling adventure would be fun, but I was really concerned about the future of my career. Life on the road is difficult, but especially difficult for someone entering the aviation career field. I eventually decided, yes, I would go. Austin proposed shortly thereafter, at the exact same spot where we met at the Flying W many years before. We decided to get married before we left- we had a few older family members, and wanted to share the moment with everyone before we disappeared across the country for a few years. We got married only three months later, again, at the exact same spot where we met! I ended up flying into the airport for the wedding, with my dad in his J3 cub (this story is so long, I forgot to mention that my dad had acquired several more airplanes in this time frame, which is how I found my love for tail draggers). Anyhow, we got married on Halloween 2015, and moved to Wichita Falls, TX, shortly thereafter, with our puppy Hartzell in tow.

The past several years have been incredible. It has been amazing to be away from family and friends for a few years to help us discover ourselves and build our relationship. I began flight instructing in Texas when we moved out there, and ended up winning the Lubbock FSDO Flight Instructor of the Year for 2017. I learned so much instructing and flying several smaller charter flights, and had my fair share of real-life emergencies in the airplane as well. While in Texas, we purchased our first airplane together, a Steen Skybolt. As it turns out, the airplane had an undisclosed and poor repair done to the landing gear before we bought it (which we missed in the pre-buy). On the maiden voyage of our new plane, the landing gear actually snapped and separated from the fuselage. Luckily, the airplane landed in one piece, but we had some extensive – and costly – repairs to do. It is now mostly finished, ready to be put back together in NJ on our return. 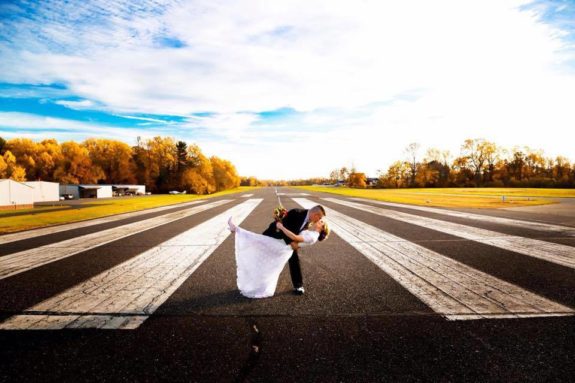 In 2017, we ended up moving to Phoenix, AZ, for F-16 flight training. At this point, I was homesick, upset about my career, and ready to throw in the towel, with a year left of training to go. As my husband started flying the F-16, I started flying jumpers at a small airport outside of Phoenix in a Cessna 206. Shortly after growing tired of that (and not making very much money), I moved on to flight instructing again at a local airport, where I still am now. I have a lot of students, and have helped several reach accomplishments that have been lifelong dreams. I’ve gotten quite a bit of tail wheel time on this adventure, but I’m excited to continue dragging those tails when we get home to New Jersey.

Our pilot training adventure is coming to a close shortly, and we will be returning home to both of our families in New Jersey. I will be starting my first full season as an ag pilot in the Pawnee, and I am currently in the process of trying to start my very own flight school (specializing in tail wheel training, of course). In addition, my husband and I are going to be buying part of his family’s farm, and are going to continue to expand into a variety of crops.

We have had so many adventures these past few years, from flying his simulators, to him riding backseat on my students’ cross countries, to going home and flying formation in the ag planes, and so many more. It has been such a great adventure so far, and we are both excited to see where life – and airplanes – take us. To think, it all started with me not knowing where the heat was in my airplane!