Anxious to continue our US perimeter flight, Boyd and I were at the Cascade, Idaho airport bright and early in the morning. Last night had been downright cold and, as guessed, a very light film of frost had formed overnight on our wings. A quick repositioning of our pretty bird, out of the shade and into the sunshine, quickly resolved any potential problem.

Our flight goal was Cascade, ID to Kalispell, MT. Ceilings were forecast to be “adequate” but with marginal clearance. We considered our flight plan a “goal” but weren’t at all certain we’d actually end up in Kalispell. We were aware ceiling heights were questionableÂ  – there were long distances along our route with no weather reporting stations. The skies were clear at Cascade when we departed, with wispy areas of low fog hanging in the valleys nearby.

The first leg of our flight the terrain was constantly changing and the mountains drenched in sunshine.

From the sunny start we followed river valleys and flew the passes, practicing what was to come. As forecast, broken clouds turned into a total overcast layer just above us.

For two flatlanders, flyingÂ  the mountains at all is stretching ourselves. Here we were now flying a river route thru the passes with marginal ceilings …. but no mountain obscuration.Â Â If we didn’t like what we saw, we always had an out and plenty of room to do a 180.

Boyd has done limited mountain flying, always high and on clear days. I had no PIC mountain time.Â  In our favor, I had just come from a mountain flying seminar and our route was chosen with the aid of a seasoned mountain backcountry, lady taildragger pilot. Thank you Wendy Lessig and Lisa Martin!

Through the mountains,Â  we got as far as Polson, MT where we sat down to wait out low fog along the last 75 mile leg.

Chuck Jarecki, a founding member of the RAF, Recreational Aviation Foundation, was having coffee with the boys inside the FBO when Boyd and I popped in. For us, it was a lucky chance meeting.

Chuck was pretty insistent that since we were headed to Kalispell and the Glacier National Park area, a drive to his love, Ryan Field, was a must. This is the map he drew me!

Drive through some mountains,Â  look for this, then hang a right.

Chuck says, don’t worry, it’s going to say restricted but go on in, take a look… and be sure and sign the book.

Ryan Field is absolutely beautiful but not appropriate for our skill level or aircraft.

So glad we drove there and saw first hand one of the many airfields the RAF has saved and maintains.

And yes, I signed the book! 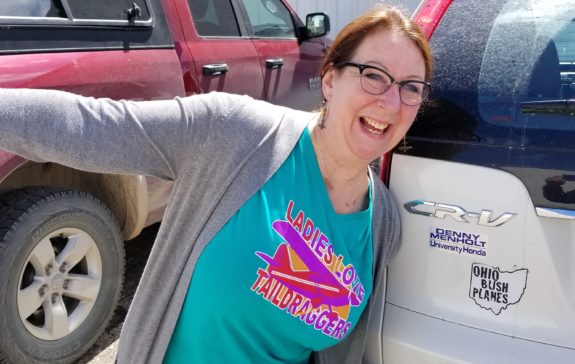 Amazing we got so much done in one short day. We landed at Missoula, MT to see Deni Whitsett, have a quick lunch and aircraft Museum tour.

The darned weather tried its best to ground us today but we just kept on working it. A heavy rain shower was passing over Kalispell when we landed and I was happy to snap a few pictures while Boyd was doing all the work!

We ended the day on a perfect note when I got a message from lady taildragger pilot Kaleigh Bordner, shortly after landing at Kalispell. She’s a Hoosier too and first officer on the Embraer 120 Brasilia out of Kalispell.Â  So wonderful to see Kayleigh in this unexpected location.

It doesn’t get better than lunch in Missoula and dinner in Kalispell, both with lady taildragger pilots!!