From the Jungles of Borneo leaps an Airplane Pilot 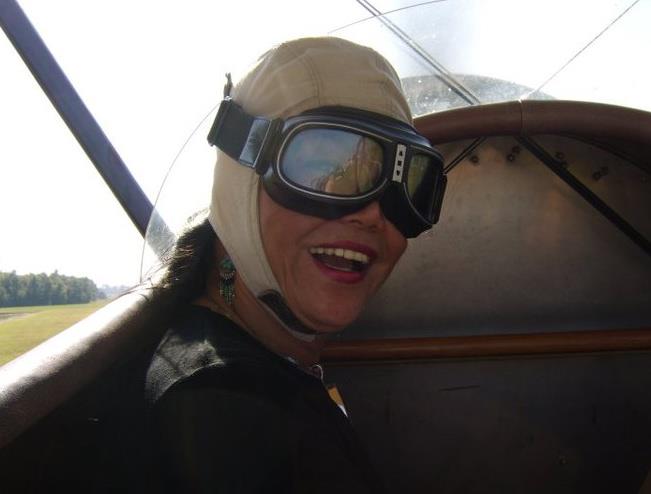 Jul 2020 From the Jungles of Borneo leaps an Airplane Pilot 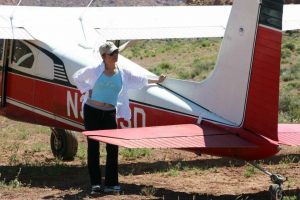 In recent days, we lost a favorite friend, Erissa Yong-Wilson, in a tragic Cessna 140 accident. Erissa was killed and her 21 year old female passenger was airlifted to a nearby hospital with unspecified injuries.  The accident occurred at an abandoned airstrip near Stave Lake, Mission, British Columbia.

Erissa was a constant inspiration to aspiring pilots, a mentor to many, and an ever-willing aviation volunteer. Her love of flying, especially taildraggers, could not be contained and shined through in all she did.

In honor of Erissa Yong-Wilson, I’m reprinting this December 2019 post written by this remarkable woman.

As taildragger pilots, we all have a story to tell. Our stories are the narrative of our paths to aviation and our evolution as pilots. For a lucky few, they are taildragger stories! There’s nothing I love more than glimpsing into the lives and stories of our lady taildragger members and never have I been disappointed. The wonderful story you are about to read is an incredible rags to riches story. It’s about a penniless, young, female immigrant who willed herself into a hugely successful life as a pilot and business owner in a new country. I’m proud to introduce you to LadiesLoveTaildraggers’ member, Erissa Yong-Wilson. 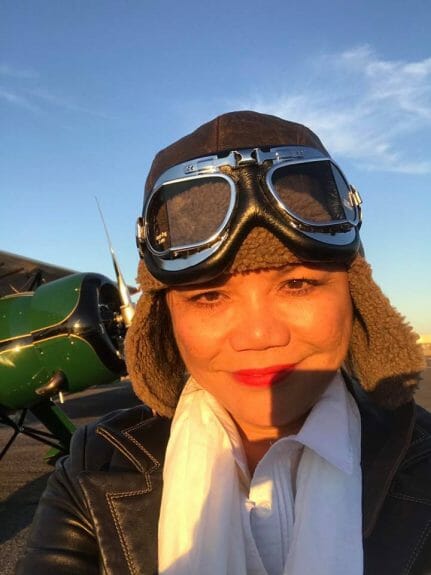 Is based at CYPK, Pitt Meadows Airport, BC, Canada, 25 nautical miles east of Vancouver, BC. 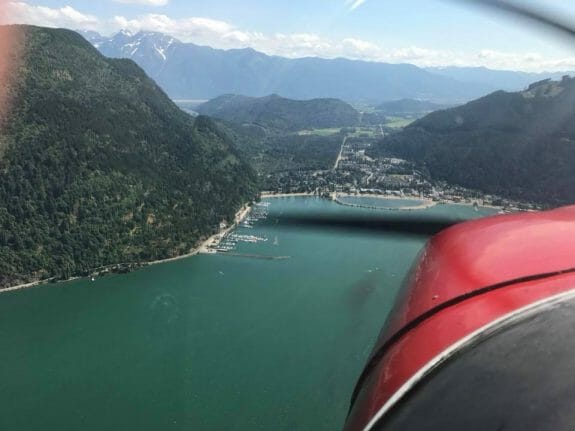 There’s the Accidental tourist, and then there’s me, the incidental pilot. I was born and grew up in the jungle of Borneo 66 years ago. As a fourth daughter in a traditional Chinese family, I was basically an extra mouth to feed. I wasn’t allowed to dream. But I did. I dreamt about leaving the jungle to attend university so that I could someday be a teacher. Teachers were respected. We grew up with very few luxuries. As a British colony then, Malaysia was not even a nation. It became an independent country only after 1963. Therefore, as a British subject, I did have a good Catholic English education. It was the only significant gift my parents gave me. In 1975 I immigrated to Canada after my Form 6 Cambridge A level.

I started the next phase of my life as an adult in British Columbia, Canada. By 1976, I was a single parent to my son, after a short, unhappy relationship. I worked three jobs most days and put myself through university. I studied criminology and Psychology. I still dreamt of being a teacher. I taught briefly in a Catholic school in Vancouver. I am proud to say I found one of my students lately who is now a very accomplished Airshow pilot flying a Stearman. He recently wrote and published a book on flying the Stearman in Aerobatics. He flies the B777 in another life. He always dreamt of flying. 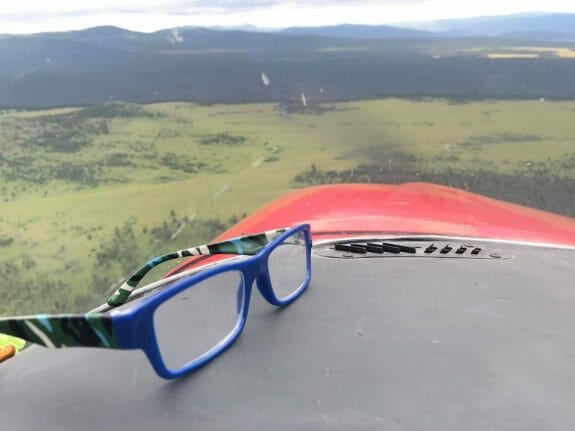 Unlike every pilot I met, I did not dream of flying. I did not know there was such a thing as Civil General Aviation. My foray into aviation was purely incidental. One incident led to another to bring me into flying.

Between 1984 and 1992, I worked with special needs children. A violent teenager broke my neck one day and my doctor said I may never walk again. In the nine months of recovery I studied Real Estate courses because I had taken an interest in Real Estate investments. I was thrifty and was good at saving. Within a year my career had turned and I became a real estate agent. I had PTSD from my injury, but I had a miraculous recovery and was walking to my doctor’s chagrin. I never took no for an answer. I was determined to live without crutches and a wheelchair. 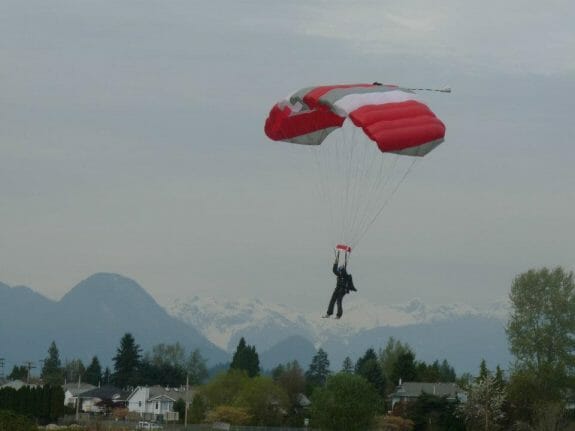 Real estate was good to me. But within 7 years of being a top producer, working 24/7, I was burnt out.

One day, a good friend said, “Erissa, you need a hobby. Come golf with us at the new golf course”. I had no idea how much I was going to suck at it. I took the first swing and fell backward, not knowing where the ball went. Weeks of lessons and thousands of dollars later I didn’t get any better. One day, when we were on the 6th hole and playing miserably, a little Cessna (I didn’t know what it was then) flew overhead and it was doing strange moves like tumbling. Later I found out the nearby flight school was doing “upper air work”. My friend pointed to the plane and said, “Erissa, you should take up flying instead”. 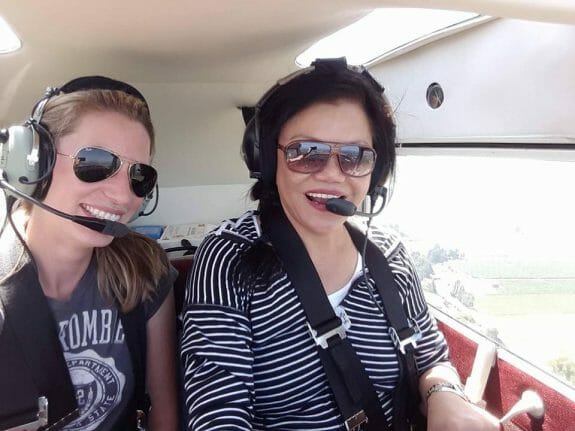 Always ready for a challenge, I got into a bet with a few other realtors that I could probably fly better than I could golf. They laughed. The bet was on. $1,000 to solo. I had no idea this incident would propel me into an added business – operating a flight school. I soloed, collected $1,000, and the rest, as they say, is history. I was 48 years old when I passed my PPL check ride. You’re never too old to learn a new skill.

Because I live in a valley where to the west is the coastline, and to the east is the mountains (one of which is the world famous Whistler ski hills), I needed to learn mountain flying. I looked up mountain flying courses in 2001, and that’s how I met the famous, late Sparky Imeson, the author of ‘Mountain Flying Bible’ and ‘Taildragger Tactics’. 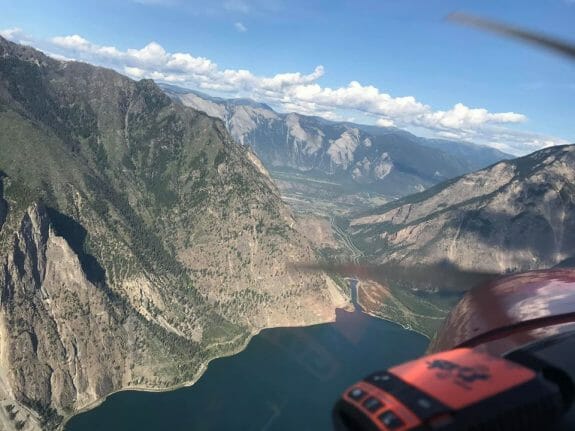 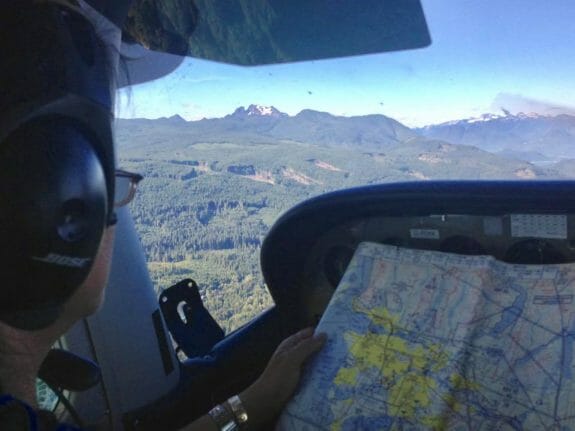 Sparky and I flew 200 hours all over USA between 2001 and 2005. It was no dream come true. The relationship was tumultuous but at times passionate and caring. Mostly it was one adventure after another. He taught me to fly the back-country strips of Idaho and Montana. He took me mountain flying in Wyoming in the Grand Tetons. We flew in the canyons of Utah, Colorado, Arizona, New Mexico and California. He showed me Aspen, Leadville, Telluride, mostly, in his cousin’s 182. He taught me to fly “by the seat of my pants” in my humble Cessna 172N which I had bought to learn to fly. One day Sparky told me “real pilots fly tailwheels and conventional gears”. Faced with this corny challenge, I had to buy a “taildragger”. Being Sparky, he wouldn’t buy any except a Cessna 180. It was his second favourite plane. His favourite is a DC3. Well, we can’t afford that. So we bought a 1957 Cessna 180 from a retired Air Force pilot in Texas. He said “it was a steal”. He also said, “it looked good from far, but far from good”. (He loved to play with words as much as he loved flying in the backcountry). So we spent time in between flying, retrofitting, upgrading and adding a STOL kit to it. 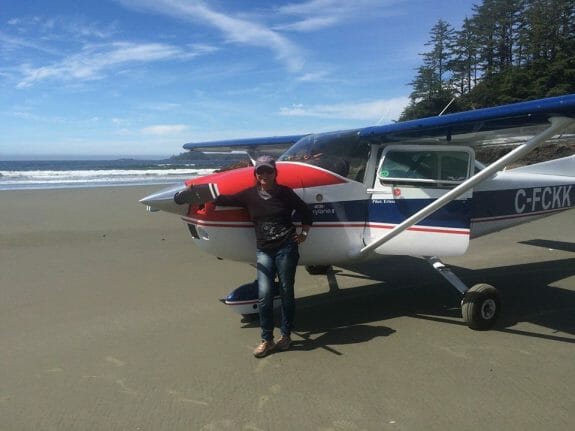 I learned to fly and repair airplanes from Sparky. My PPL license was only a ticket to move forward to more interesting flying that I never dreamt of. In 2009, Sparky died in a crash in Bonny Ferry, Montana.

Sparky was my first flying muse and mentor. Before Sparky died, he introduced me to another great mentor who is also the great author of “Fly Baba”, “Fly Idaho”, “Fly Montana’” and more. He is Galen Hanselman. In 2010, he invited me to his family home in Hailey, Idaho to help him survey a few of the 80 backcountry strips for his new book, ‘Fly Idaho’. It was a priceless experience. 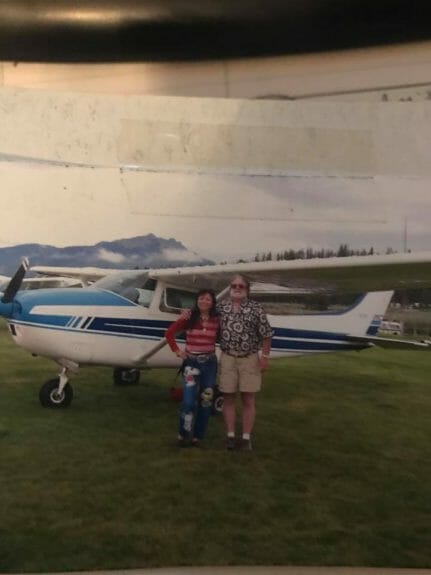 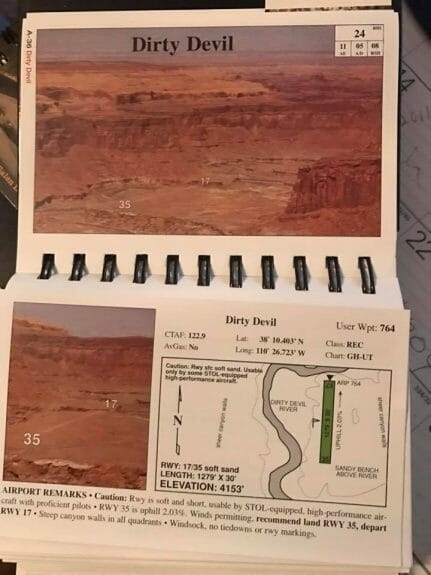 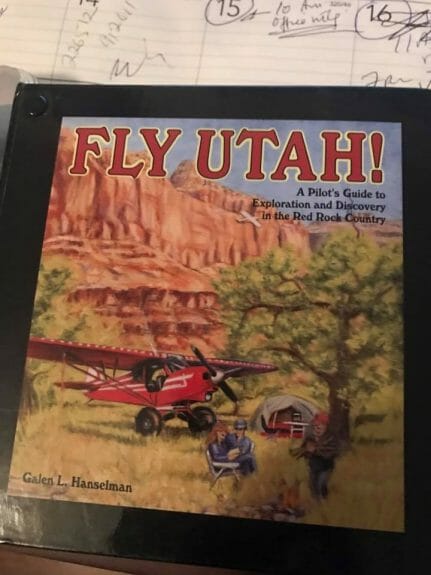 In 2011 I decided I wanted to fly a taildragger again. Since Sparky and our C180, I had not flown one.

Prior to that, in 2009 I’d bought a 1977 Cessna 182Q from Oregon. I’ve flown it a lot. I flew across Canada, twice to Yukon and North West Territories, Alaska solo and then south as far as Texas. It was a great learning experience. Big learning curve. There were many cross country flights I made between 2012 and 2016.

The 900 hours I put on this plane made me decide to take my VFR flying to the next level. I wanted to be a “gravel bar cowboy”. And they all flew taildraggers. They land on river sandbars. Did I say I love a challenge? 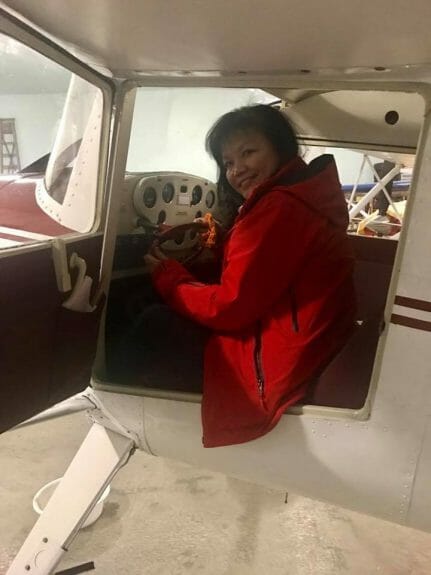 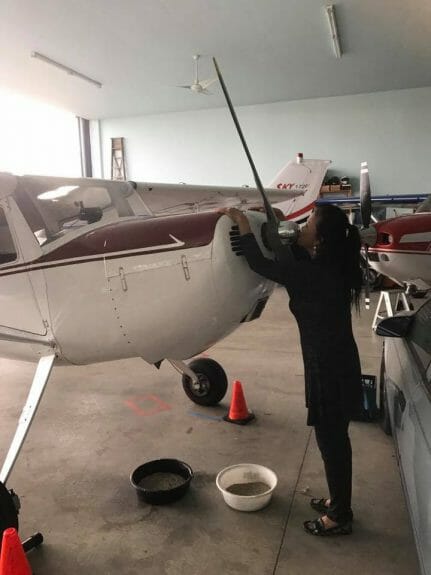 In 2011, I decided I wanted to fly a taildragger again. I looked up Jeanne MacPherson, a friend I had acquainted thru Sparky. Since Sparky and our C180, I had not flown one. Jeanne took me up on a weekend visit to teach me to fly in her Decathlon. She was always an inspiration for me. She gave me a taste of aerobatics and enrolled me in IAC. This was addictive. This incidental training with her got me interested in more aerobatics! 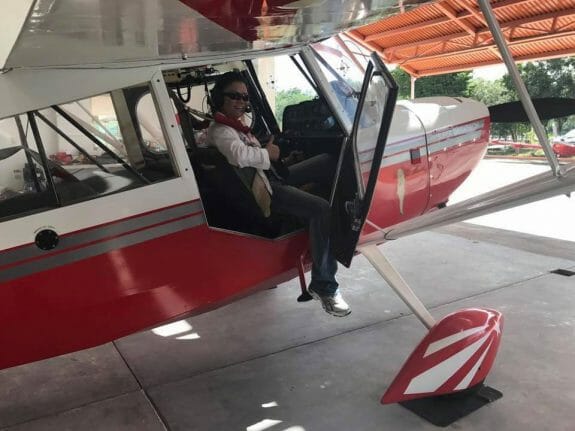 And so between 2012 and till today I got involved in Airshows. I met a phenomenal pilot, Gary Ward of Georgia whom I grunted in Airshows in USA, Mexico, and as far north as Alaska & as far south as Guatemala. Through Gary I learned to fly the Cessna 140 because he had one and between Airshows we had time to burn. Through Gary I met many airshow pilots who all cumulatively mentored and taught me the art of aerobatics and tailwheel flying. There was some science thrown in there at times. There’s Skip Stewart, Patty Wagstaff, Marcus Paine, Dan Buchanan, Debbie Gary, Jason Newburg, Greg Koontz and others in Canada. 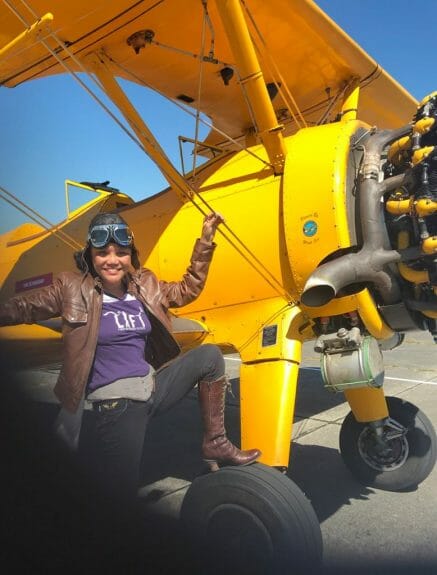 I have been blessed beyond my dreams as a child. I never dreamt of flying. But by default I fell hard and long into this “hobby” which became a business for a while. I have instructors and students today who fly as captains of many national and international airlines. People whose lives I’ve touched and who in turn touched mine and taught me.

Today I give back to my aviation community by flying young students, allowing them to fly my planes, and offer scholarships to this worthy cause. I mentor them as I have been mentored by great pilots before me. 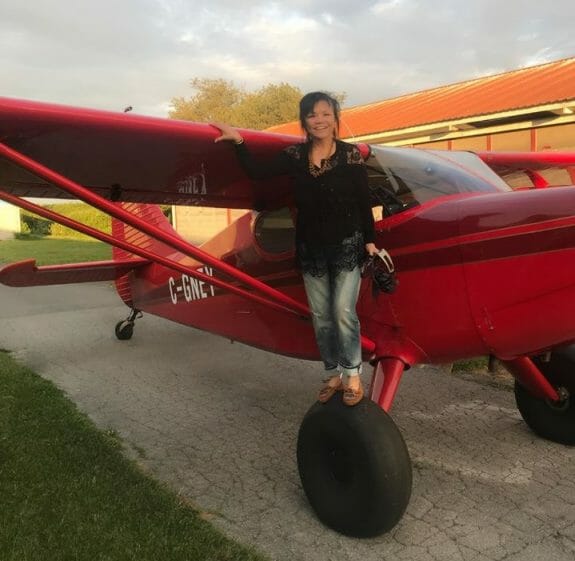 As an avid aviator I am a member of AOPA, EAA, COPA, 99s, Aeroclub of BC, BC General Aviation and at one time ICAS and IAC. Why? Because they enrich my life beyond my present dream of flying. A dream I didn’t dream of a life ago. Facebook has connected me with you; the ladies of taildragging and for this I’m grateful.
I am humbled by you. You are a whole lot of talents in this group. You have been the thrust and lift in my wings. In return I hope I have entertained you with one aspect of my convoluted being. That I can be uplifting also. I hope I can inspire others to reach to the stars (yes, real life flying stars like my above mentioned mentors) to achieve their desires, goals and accomplish their dreams to experience more adventures in their passion, be it a flying career or merely for staving off boredom … to fly forever more. Because you can. Together “we can do it”.