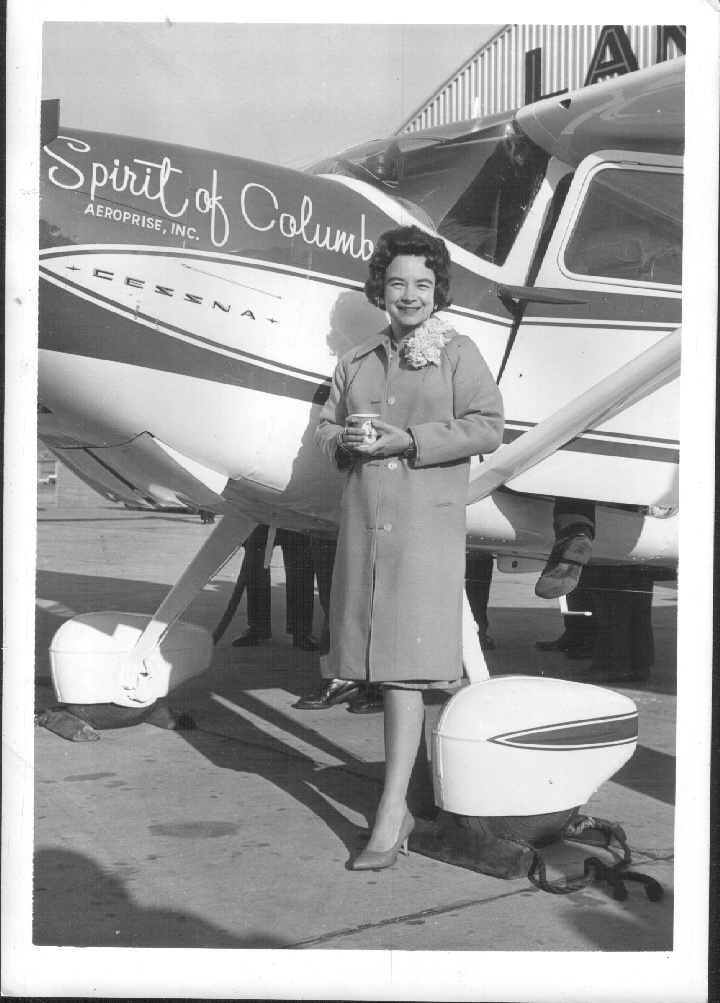 “So Will We Ever See Honored the First Woman to Fly Around the World, Solo, (in a taildragger of course?)Â I think you gals ought to really hold her up as the ultimate role model! Warm Wishes, Carl”

I have to agree with Carl, she is the ultimate role model and I can’t help but wonder how many of us know her name and her accomplishment? Jerrie Mock flew solo around the world in 1964 in a Cessna 180! Thank you Carl for helping spread the word about this remarkable lady taildragger pilot! I understand Jerrie currently resides in Florida but I have not been able to confirm it??

Aviation’s Forgotten Pioneer – A Woman on a Mission

Stop by the coffee shop at any local airport and you’ll find a couple of tables filled with general aviation pilots telling hangar stories, those wonderfully famous exaggerations of yesterday’s flying adventures. 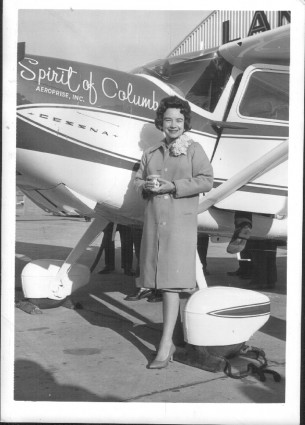 Everyone at the table will be an aviation historian on some level, each with his or her own wealth of knowledge, each happy to tell you about it. Ask them anything, and chances are the answer will be provided faster than Google could deliver it from somewhere out in cyberspace.

If you want to score the trivia equivalent of a slam-dunk, stroll up and ask them this one question, and watch as their faces go blank:

“Who was the first woman to fly solo around the world?”

Of course, everyone at the table will agree that a complex 23,206-mile, 19-stop flight around the globe alone in a Cessna 180 would be a noteworthy accomplishment. But ask someone to provide the name of the courageous woman who made such a significant and historic flight in 1964, and you’ll win that trivia contest every time.

Oh sure, someone at the table will let the coffee do the talking and shout out, “Amelia Earhart,” only to be quickly corrected by someone else who explains that Earhart failed to complete the mission when she and navigator Fred Noonan disappeared in the South Pacific.

Right at that moment you tell them the famous aviation pioneer was Geraldine “Jerrie” Mock. She was a determined 38-year-old mother of three who left Port Columbus Airport in Ohio on March 19, 1964, and returned there 29 days later to a raucous welcome by 3,000 fans, completing the first solo around-the-world flight by a woman pilot. 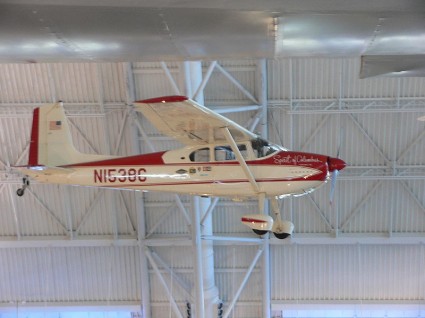 Her flight should be considered by aviators to be more technically challenging than Charles Lindbergh’s, and more successful than Earhart’s. But because of a number of events that collectively worked against her, Mock’s accomplishment fell through the cracks of the history books, and the story of her flight has remained hidden for 41 years.

Like most pilots, Mock’s passion for aviation was ignited at a very young age, when her father, Tim Fredritz, arranged a ride in a Ford Tri-motor in 1931. Once the Tri-motor’s wheels left the sod runway, this young aviatrix was hooked for life.

Jerrie grew up and married Russ Mock, also a pilot, and despite the responsibilities of a growing family, earned her private pilot certificate in 1958. She soon opened a flight school and aircraft rental business and continued spreading her wings as a pilot with longer and longer cross-country flights to destinations such as the Caribbean and New Brunswick.

During this time, an event took place on the small French Canadian island of St. Pierre that may have foreshadowed Mock’s future. “Russ and I were eating in the dining room of the hotel, and I noticed there was a wireless room next door,” Mock said. “I could hear pilots reporting their positions over the North Atlantic, and I was fascinated. It was all very exciting to me.”

Since childhood, Mock had dreamed of visiting faraway destinations, just like a woman she had admired, Amelia Earhart. Those early around-the-world dreams began to come together for Mock around 1960 when a neighbor who was also an Air Force pilot gave her an outdated collection of world airways charts. Soon the walls in the basement of Mock’s Bexley, Ohio, home were covered with these charts, and it was here that she planned her flight. 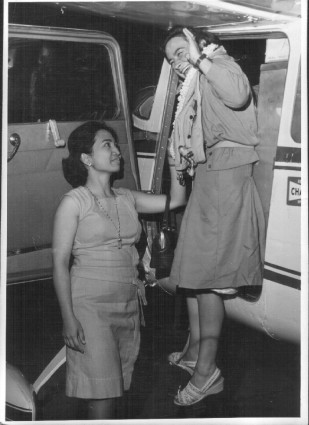 “I really had no intentions of being first at anything when this all began,” Mock said recently. “I just wanted to see the world. But when I found out from the National Aeronautic Association [NAA] that a woman had never soloed around the world, it sounded like a fun thing to try.”

It is important to note that Mock did nearly every bit of planning for the flight herself. Russ Mock was an advertising man and helped by arranging financing from an agreement with The Columbus Dispatch newspaper and nearly 20 aviation equipment manufacturers. But it was Jerrie who planned and executed the complicated preparations for the around-the-world attempt.

“There were women flying here and there back then, but they usually had a man along as copilot,” Mock explained proudly. “If they did fly solo, someone else planned everything. I had none of that! Nobody in Columbus knew a thing about flying over oceans or long-range navigation because nothing like this had been done before. I planned every mile of the flight myself, in my basement.”

Mock did receive some valuable advice from a few Air Force men, in particular Col. (later Gen.) O.F. “Dick” Lassiter and Brig. Gen. R.H. “Bob” Strauss. A letter from Mock’s archives dated “17 March, 1964” shows that Strauss sent a request around the world asking others in the military to “extend any courtesies to Mrs. Mock should she land on or near your base.”

Throughout both the planning phases and flight itself, Russ’ mother, Sophie, was always at the Mock home, making sure the children were cared for at all times. This grew into a hot topic of discussion for some people in 1964, as society was not yet ready to embrace a “flying housewife” taking on the world with children still at home.

Mock would make several trips to the U.S. State Department and numerous embassies in Washington, D.C., along with trips to Fort Lauderdale, Florida, to install avionics, and Wichita, to install large ferry tanks in her 180, the Spirit of Columbus, nicknamed “Charlie.” When those aluminum cabin tanks were filled, the Cessna 180 would carry 178 gallons of gasoline. With a tiny corner of the cabin left open for the pilot seat, Charlie was literally a flying gas can.

Everything was set for an April 1, 1964, launch when Mock received word that another woman was planning to depart March 15 on a similar mission to be the first woman to fly around the world solo. Joan Merriam Smith would be flying a slightly longer route in a twin Piper Apache, considerably faster than Mock’s single-engine Skywagon.

The news sent Mock’s planning into a tailspin. Because of a financial commitment to her many sponsors, Mock accelerated her preparations and rescheduled her launch for mid-March, losing two weeks of critical time to finish fine-tuning Charlie’s modifications.

What had been intended to be a pleasure flight around the world and into the history books had become a race, with two determined women going head-to-head in a highly publicized but unofficial contest to be the first to circle the globe solo.

Smith departed Oakland, California, on March 17, followed by Mock departing Columbus two days later. Both flew eastbound, with Mock being pushed by husband Russ to fly through unsafe weather just to stay in the race. She continued to keep an aggressive schedule, but only on her terms.

“There was never any question who was PIC on this flight,” Mock said, “and I never let trying to be first around the world get in the way of making the proper weather and flight-planning decisions. I never wanted it to be a race, but once it became one, I decided to try and win it.”

Along the 19 legs of her adventure, Mock faced daily challenges that would test any pilot. Severe icing over the Atlantic, Sahara Desert sandstorms, and a vicious front inbound to Columbus were a few of the weather-related hurdles. While landing into strong winds on Bermuda, she handled the stout Skywagon with precision when faulty brakes couldn’t keep Charlie on a crosswind taxiway, sending Mock into a series of 360-degree circles. New brake assemblies were supposed to be mounted on Charlie prior to departure, but in the rush to keep up with Smith’s surprise early launch, Mock’s crew sent her off without mentioning the brake problem, forcing her to fly much of the trip with brakes that had seen better days. 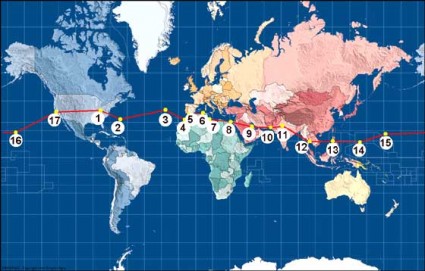 Around the world in a Cessna 180

It was in the Middle East that Mock finally got to enjoy some of the cultures that had intrigued her since grade school. “I was fascinated by how the Muslim women dressed in different countries,” she said, “and I was treated with respect wherever I went. The nationals at each stop were always friendly. I don’t think that would be the case on a similar flight through the region today.”

Some well-timed advice from a U.S. Air Force pilot in Bangkok arranged by Strauss helped Mock tiptoe around the escalating Vietnam conflict. It was over the Pacific that she widened her lead over Smith, who fell farther behind because of mechanical and weather problems. Smith eventually returned to Oakland 25 days after Mock reached Columbus.

When Charlie’s wheels touched down back at Port Columbus Airport on the evening of April 17, 1964, Jerrie Mock secured her rightful place as part of aviation’s history. But in the months that followed her flight, the Southeast Asian war intensified, pushing her news quickly off the front pages of America’s newspapers. And after writing her book, Three-Eight Charlie, in 1970, distribution glitches forced the book to have a limited release.

Author Dan Pimentel is a private pilot, writer, photographer and owner of anÂ advertising agencyÂ that specializes in the aviation market sector. He is also an active blogger, posting often about aviation issues at hisÂ blog, World of Flying.