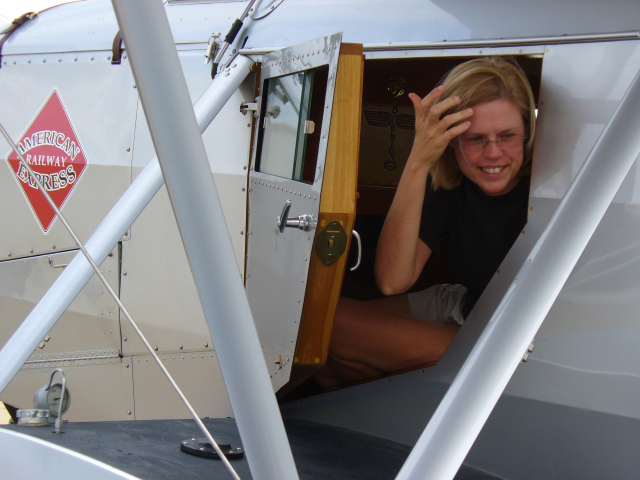 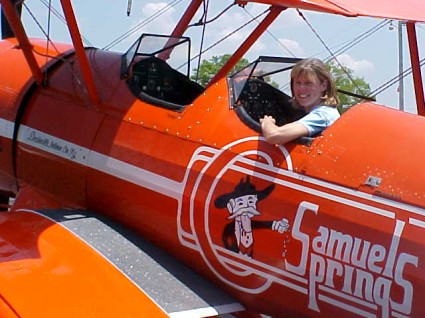 Just finished my checkout in a Stearman with a 985 engine. I had started working on a project to fly a stearman around the world. The project never materialized and is a great story over a glass of wine sometime.

Although not one person in my family flies, I acquired a sense of adventure from my parents since we had traveled as a family to every state except Hawaii (via car) by the time I had graduated from High School. Thatâ€™s just one of the stories that I tell when asked why I learned to fly. The others involve rebellion and are probably best told over a glass of wine after a long day in the sun at Oshkosh. 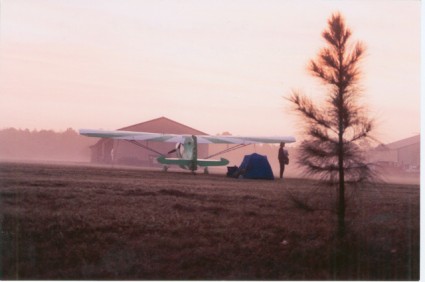 The Citabria “Grasshopper” at Seminole Lake Gliderport in Florida. . .I used to love to go there and camp out and talk to a WWII pilot that worked on the field. One interesting story. . .the girls that worked in the manufacturing plants would put notes to the guys in the caps in the center of the yokes. They guys would love to be the first ones to get a plane out of the plant so they could read the notes. 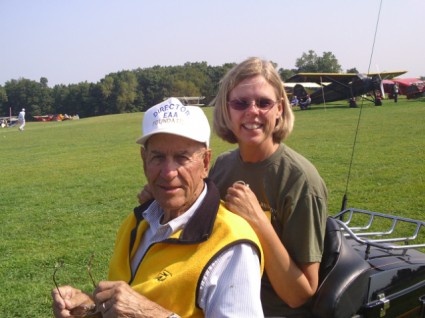 While at Blakesburg a couple years ago, Rich went flying in some neat airplane and I got to ride on a motorcycle with Paul Poberezny.

After receiving a nomination and appointment to the US Naval Academy (in the 80â€™s), I made a political statement by turning down this prestigious school because at this point in history they were not letting women fly fighters and I felt that the rules needed to be changed. I went on to study accounting and computer science and once established in my career, was able to finally explore my passion for flight. 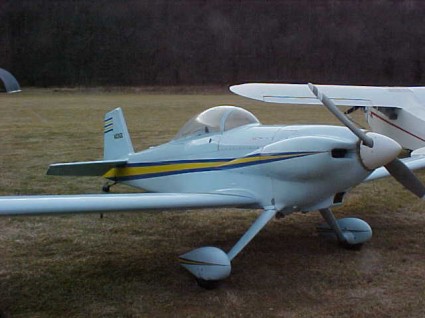 I traded in The Grasshopper for an RV-3 that I called ‘The Blue Angel’. I needed a way to get from Indianapolis to Lee Bottom quicker and this little gem did the job with a cruise speed around 165mph. I guess I got quite a reputation when I bought this plane. I went one day and did the pre-inspection myself. Called him that night and said I would take it, went back 2 days later, gave him a check, put some air in the tires, taxied out, and took off. The thing that is funny is that the guy who owned it had scared himself with it, I guess, because I later found out that he had never flown it and could barely taxi it around. They were sure that I was going to be on the news later that night. I sold it later to a guy who wrecked it just days after he got it. I guess it was just a ‘girls’ airplane.

Captivated with flying and the challenge of learning more, I expanded on my initial goal of only obtaining a private pilot certificate with additional ratings: glider, instrument, commercial multi-engine, commercial single-engine and CFI. I even went a step further by learning how a human can actually fly like a bird by obtaining a Class A Sky Diving certificate and can tell you that it is the most fun a person can have with their clothes on. 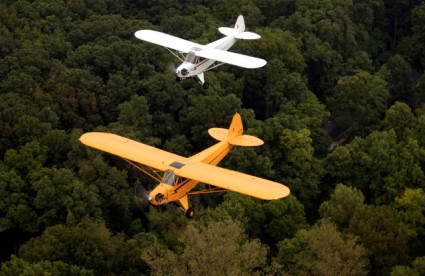 Over the Trees: This is the photo that we used on our wedding announcement. I’m flying the yellow cub and Rich is in the white clipped wing cub trying to catch me – he finally won (or maybe I just slowed down).

I bought my first airplane â€“ a Citabria â€“ to gain experience in tailwheel airplanes. I had heard that they have a special magic about them and had to find out what it was all about. Once checked out in my favorite bird, I went on a trip to Frankenmuth Michigan. Why? I donâ€™t know because Michigan is cold in November! But, I was determined to camp under the wing of my very own plane. The men at that little airport are probably still talking about that crazy girl that wouldn’t come inside that very cold night. But, I was living my own dream! 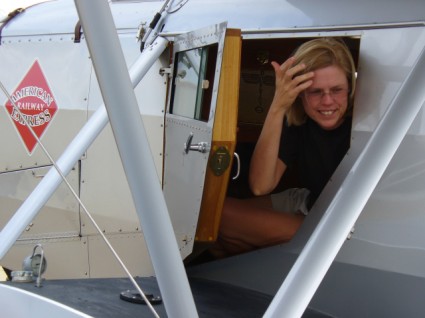 I had the wonderful oppoprtunity to ride as the only passenger in this one of a kind aircraft – a Boeing Model 40. I can’t even begin to put into words the way this trip made me feel. I can tell you that I kept thinking about Ernst K Gann’s book The Aviator and realized that I was born during the wrong era.

The little green airplane that was affectionately called â€œThe Grasshopperâ€ took me around the country and eventually led me to find â€œthe man of my dreamsâ€. This barnstormer of a pilot, Rich, owned an airport and was just as much in love with flying as meâ€“ probably more. Today, we own, operate, and manage the airport, have expanded the runway to be among the longest public use grass runways in the country, and are incorporating a museum to remember the airports of yesteryear. We host the largest fly-in event of its type, publish an online aviation publication that has over 7000 subscribers, and have many other dreams and plans for the airport known by most general aviation pilots in the country as Lee Bottom Flying Field. 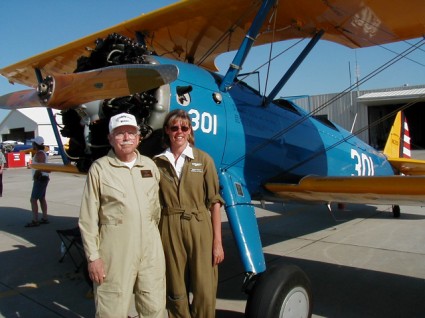 Dressed in my WASP outfit at the airport in Goshen Indiana with Bob Smith during their airshow. I would heave 100’s of kids up into the cockpit of the PT-26 during these events and talk to them about WWII. Bob thought this was great and wanted to get his picture taken with me by his stearman – well, after I drooled over his stearman and offered to fly it for him – yeah, who was being the kid this time?

Although enamored with the freedoms associated with flying, I feel most at home in the middle of the woods. I could spend hours watching nature and often wonder why everyone looks right past the small things in life. In my late 30’s, I took 3 months off from my career and hiked over 1000 miles of the Appalachian Trail from just north of Atlanta, Georgia to Harper’s Ferry just outside of Washington DC. This experience taught me a lot about myself and others. 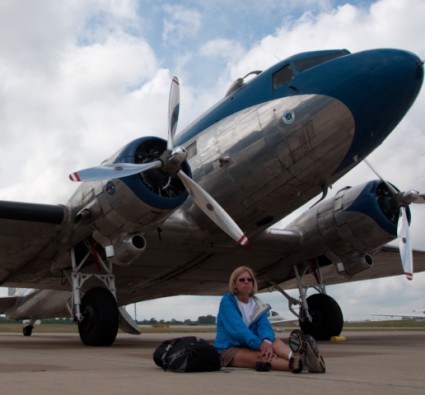 Hey, an opportunity to fly a DC-3, now that will get me out to the airport early. I think it is funny and just a weird piece of trivia that that I have had the opportunity to fly a J-3, RV-3, and DC-3 into Oshkosh – I call it the Oshkosh triple trifecta. Any more planes with the number 3 in the model that I could fly????

Because of my countless hours spent backpacking and GPS experience gained from aviation, I was recently chosen from thousands of applicants to help Backpacker Magazine on a mapping project of the Continental Divide Trail. My love for the outdoors has also led me to have hobbies in gardening, beekeeping, maple syrup production, and I have recently started raising sheep which help me to mow the grass at the airport. 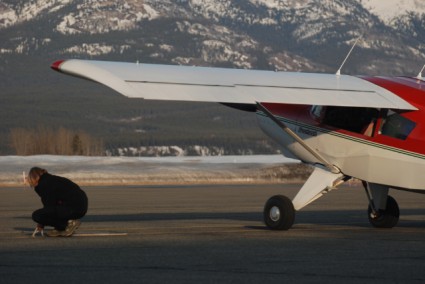 Tying down the Bearhawk in Whitehorse, Yukon Territory, Canada. Rich and I got the opportunity to ferry this company demo plane around all over the country. This trip was from Austin, Texas to Anchorage, Alaska.

Today, I consider myself â€œsemi-retiredâ€ which means that Iâ€™m working harder than ever while being under-appreciated, under-utilized, and under-paid. I have been involved in the 99â€™s, served on the executive board for the Indianapolis Air Show, flown WWII trainers to airshows dressed as a WASP, ferried airplanes to Alaska, held the Wing Leader position for the Indiana Wing of the CAF, and been a member and leader of many other aviation clubs and organizations. I am also involved in Rotary, DAR, our local Chamber of Commerce, Indiana BeeKeeperâ€™s Association, Gun Ownerâ€™s of America, American Sheep Industry Association, our local Girl’s Inc affiliation, and the Jefferson County Republican Womenâ€™s Club. I have rebuilt car engines, worked in an aircraft restoration shop, rode motorcycles, and started my own business from scratch. 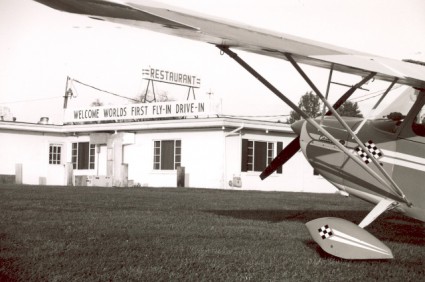 Â The Citabria “Grasshopper” at Elwood . . . This was taken when I flew Rich there for our first date. I used to fly there for breakfast, fly back to Mt. Comfort, go to work downtown, and then fly back to Elwood for dinner. It was a special place, I miss it.

My duties at the airport have put me on a batwing mower instead of behind the stick of my Piper Cub, Champ, or RV-3. For the past 10 years, Iâ€™ve spent all my spare time ensuring that others have a place and a reason to go flying. My resolution for 2012 is to find others to take over some of these responsibilities so I can get back into the air. Iâ€™m hoping that by meeting more ladies who love taildraggers, I will be more motivated to accomplish this goal. I am excited that women are now flying fighter jets and I look forward to the next stage in my life which my husband lovingly dubs my â€˜silver foxâ€™ days. 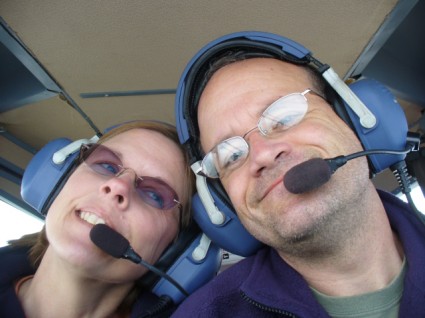 Ginger & Rich “Ahh, he loves me . . . And other things you do to entertain yourselves on a long cross country flight.” 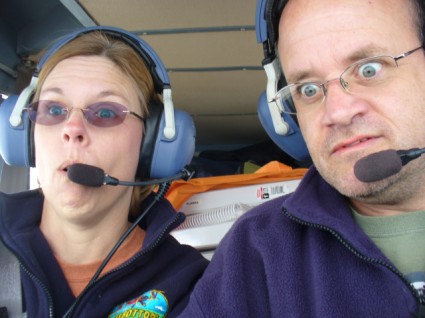 Oh No! What did you do now? And, some more things you do to entertain yourselves on a long cross country flight.