Good for Business, by Gayle Crowder 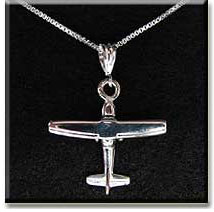 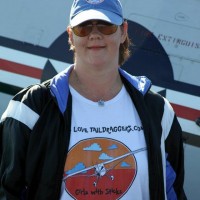 I am obsessed with aviation. When I’m not at the airport, I want to be at the airport. Or to talk about the airport, or airplanes, or flying. It’s difficult to be stuck working in a retail store all day, trying to concentrate, when my mind is two thousand feet AGL. Trouble is, there is no one at work who wants to talk flying. Or so I believed, until I my hubby gave me a small silver airplane pendant. Now it hangs from a chain around my neck.

I never take my necklace off, so the shiny one-inch wingspan plane peeks through the V-collar of my uniform shirt. Most of my customers don’t notice it. Some assume it’s a cross. I receive a lot of â€œBless you’s,â€ although I haven’t sneezed. I live in the South, so that’s to be expected.

Every once in a while, someone does notice. â€œIs that an airplane?â€ they’ll ask, then look at me funny. I’ll confirm that yes, it is, in fact, an airplane.

One of two things tends to happen next: they’ll either say, â€œWhat’s a girl doing, wearing an airplane?â€ or they’ll ask, â€œDo you fly?â€

I don’t bother with the ones who wonder what a girl is doing, wearing an airplane. Most of them are a lost cause, this I’ve learned. But when I hear, â€œDo you fly?â€ I grin and another entertaining exchange thus begins.

I’ve had some of the best over-the-counter conversations with the most interesting people, all because of that little airplane pendant. Imagine, engaging in hangar flying at a retail store, with customers whose only goal had been to purchase something and be on their way.

Every customer who comments on my necklace offers some kind of flying story. I’ve met pilots, non-pilots, airline passengers, GA passengers, and people who’ve never even been off the ground. They all have something to say. They light up and tell me their stories, I tell them mine, and we share a laugh. It’s the best few minutes of my workday. Judging from the smiles on their faces as they leave, they’ve enjoyed that bit of unexpected camaraderie, too.

It’s much easier for me now to be at my store, away from the airport, anticipating that someone might notice my silver airplane and end up hangar flying with me. I’m grateful for those every-so-often nuggets of chatter; they’re good for my state of mind. Over the years, I’ve become good pals with many of my customers. They keep coming back for more. They walk in, ask how my flying is going, impart a tale or two, spend some money, and everybody goes home happy.

I never imagined a necklace could spark such kinship…and it’s been pretty good for business, too.