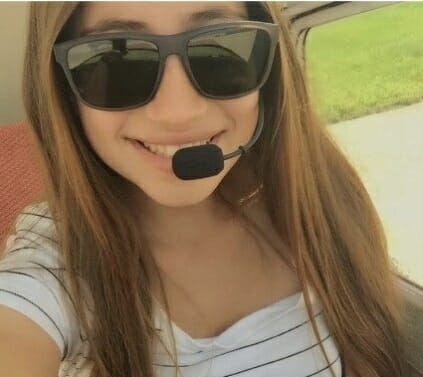 in 'Central' Gals, Profile by Greg White 0 Comments
1 Like

My name is Grace Kohlert and I am 19 years old. I grew up in aviation; my father owns an FBO out of DeKalb and is an IA and a corporate pilot, and really inspired me to get into it, so I got lucky. In between my freshman and sophomore year of high school, I decided to help out more at the airport (which mainly included a lot of filing, grilling lunches, and cleaning everything.)

One day, a B-17G came into DeKalb, and one of the guys in charge of it saw me cleaning the leading edges of one of Fly America’s planes. He came by on a golf cart and asked me if I’d like to clean off the leading edges of the B-17G which was on the neighboring ramp. I was thrilled and said yes, and excitedly went there to clean. I got a few pictures taken and a tour of the plane.

On the day the B-17 was supposed to depart the airport, the 4th of July 2016, it was taking people on rides. I watched all of its engines start, the taxi, and the takeoff pretty excitedly. One of the CFIs at Fly America saw me and convinced me to go up in a Cessna 152 with him. That was my first flight lesson.

I had my first solo in that plane in November of that year, and continued cleaning and interacting with everyone at the airport. In late spring and early summer, my father decided that it was time for me to fly The Pumpkin, an orange 1947 Cessna 140 that my father did his flight training in and still owns today.

I was really lucky to be given that opportunity. My first solo in that was in late June of 2017. I spent nearly every day that summer at the airport, and I would often solo it in the pattern in the earlier mornings or later at night. My father and I frequently took on adventures to other airports to drop off or pick up different airplane parts and paperwork, and he also taught me how to land on shorter, soft field runways in that plane. The Pumpkin went into its annual the beginning of December 2017, and my dad decided that he wanted to completely redo and modernize the cockpit.

Unfortunately, given that he’s needed to focus on other customers and we’ve both been busy, this project is not yet finished, but is getting close. With him helping and watching and approving everything I was doing, of course, he let me help him by taking panels off the airplane, testing the ELT, and change some of the lights.

During the summer of 2018, I had started to visit and look at some potential schools that offered aviation programs. In October of 2018, I became accepted into Lewis University, one of the few schools I had applied for that I could realistically go to, and after considering my other options, I had decided to enroll on Valentine’s Day of 2019.

After graduating high school, I spent about two weeks preparing for the private pilot written test. When that was done I moved to a Piper Warrior II to complete my training. I was at the airport nearly every day. If I wasn’t flying, I was doing ground school. When I got home, I was studying the ground material I had learned, alongside working in a box office in my hometown. Despite getting my wisdom teeth out that summer, I still showed up regularly to study and to fly. I was able to advance in my training fairly quickly and complete all of my solo cross country flights in one day. The day of my checkride and oral, my flight examiner told me that I had some of the most complete responses she had had in awhile, and that she was happy to go up with me. I got my PPL that day (late August of 2019) and started at Lewis University the following Tuesday as a freshman.

At Lewis, I am flying Cessna 172 S-models and working on obtaining my Instrument rating, and I am planning on staying there over the summer to get my Commercial license. In between semesters, I will also be studying and taking the written tests to get an AGI rating so I can help people at Fly America prepare for their written tests and orals. My goals relating to aviation include getting my ratings done quickly, becoming a gold seal CFI (or CFII), gaining hours, and then, hopefully, being put in the right seat of something and working my way up from there. I currently have 169.8 hours. I try to fly whenever I can, and I usually gain more hours every week.

Aside from my life at the airport, I am a college student that enjoys cooking, exercising, and spending time with her family and friends. I am also learning how to knit and crochet.

I love flying taildraggers because they’re more fun to fly than nose wheel airplanes! I like the extra thrill, and it’s taught me how to be very precise with using the rudders, and I enjoy lifting the tail upon takeoff. Landing it is loads of fun, too! Also, I love how much (leg) room there is in there compared to the other Cessnas I have flown – too much for me! I’m 5’2″ and I used to have to fly it with five pillows before getting my own and thicker cushions. My nickname used to be 5 Pads, lol.

Additional comments: I found out about this group because I met Judy. She flew into DeKalb when she was coming back from Oshkosh this year, I think. Also, I’ve chosen to include some of my favorite pictures taken in The Pumpkin, because that’s my favorite plane out of all the ones I have flown.