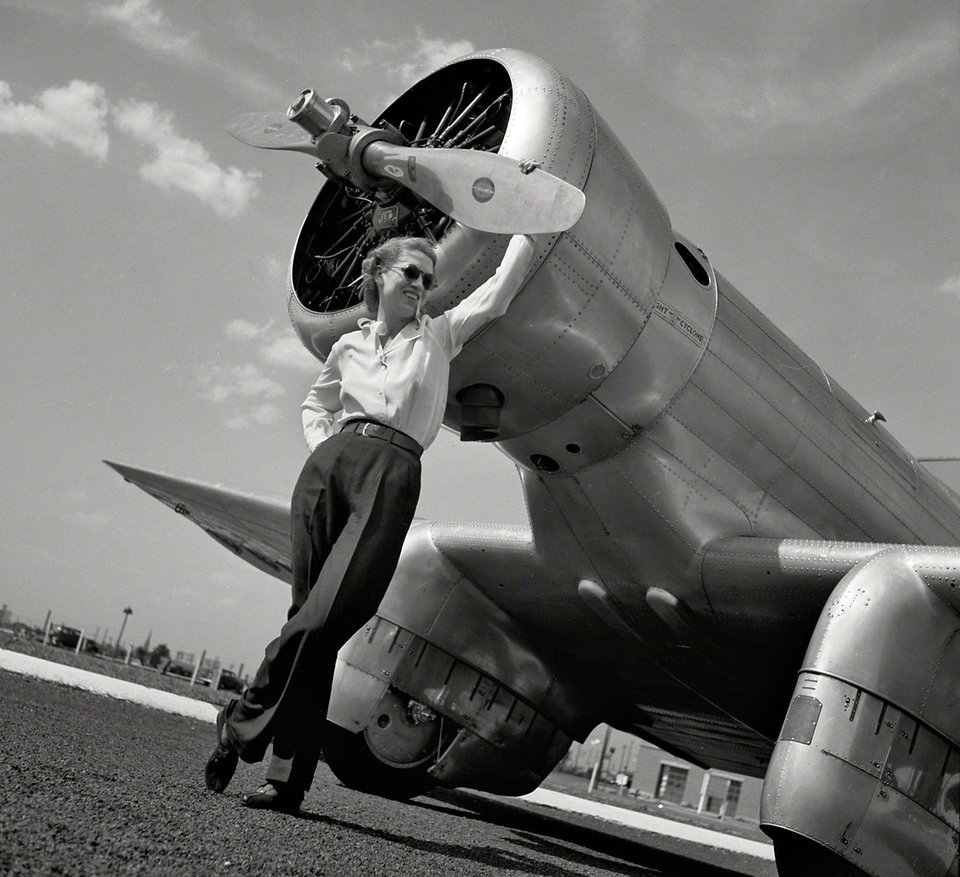 Jackie Cochran is a hero in my mine and I love reading anything I come across about her. Thank you to Ray Johnson for pointing me in this direction and to ‘This Day In Aviation’ for a wonderful read. https://www.thisdayinaviation.com/tag/northrop-gamma-2g/.

This first photo is Jackie Cochran posing with her modified Northrop Gamma 2G built in 1934. Jack Northrop designed and built the Gamma as a long-range cargo and mail plane for Transcontinental and Western Air, Inc. but the contract was cancelled and several became available to other customers. Jackie Cochran purchased serial number 11 in 1934.

The Gamma had a wingspan of 48′ and the original engine was initially replaced with a liquid-cooled, supercharged Wright Aeronautical Division Curtiss Conqueror, a V-12 engine rated at 745 HP. With a 2-bladed propeller, the Gamma had 7 fuel tanks: 3 in each wing and 1 in the fuselage. Total capacity was 486 gallons with 29 gallons of lubricating oil. A second fuselage tank was later added bringing the total fuel capacity to 586 gallons. The Gamma 2G had an empty weight of 4,727 pounds and a maximum gross weight of 8,037 pounds.

While being ferried to New York by Jackie and her new copilot, Royal Leonard, problems with the engineâ€™s supercharger forced them to land in Arizona.Â  Cochran continued east by airliner while Leonard and a Curtiss-Wright’s mechanic continued east in the Gamma. Flying at night, a continuing problem with the supercharger forced them to make an off-field landing near Tucumcari, New Mexico, using light from dropped flares. The Gamma was seriously damaged and had to be returned to Northrop for repair.

Jackie Cochran flew the Gamma in the 1935 Bendix Trophy Race, but, approaching severe weather over the Grand Canyon, landed the airplane and did not finish the race.

Howard Hughes had seen the Gamma and wanted to buy it. Jackie Cochran tells how Howard Hughes acquired the airplane:

One night about 11:30 I was exhausted in my hotel room and the telephone rang. . .

Iâ€™m thinking that this is an incredible conversation. â€œItâ€™s not for sale, Howard,â€ I reply. â€œIâ€™m going to fly it in the Bendix.â€

Howard Hughes and I negotiated over the Northrop Gamma for about four weeks. . . Howard wanted my Northrop so badly, but it would break my heart to consider handing over my rights to it. . . when he offered to rent it, with an option to buy, I caved in. . . .

January 14, 1936 Howard Hughes set aÂ FÃ©dÃ©ration AÃ©ronautique InternationaleÂ (FAI)Â World Record for Speed Over a Recognized Course (Los Angeles, California, to New York) in 9 hours, 26 minutes, 10 seconds,Â at an average speed of 259.1 miles per hour. Most of the flight was made at altitudes of 15,000â€“18,000′ flying Jackie Cochran’s Northrop Gamma 2G, serial number 11, which he had leased from Jackie.