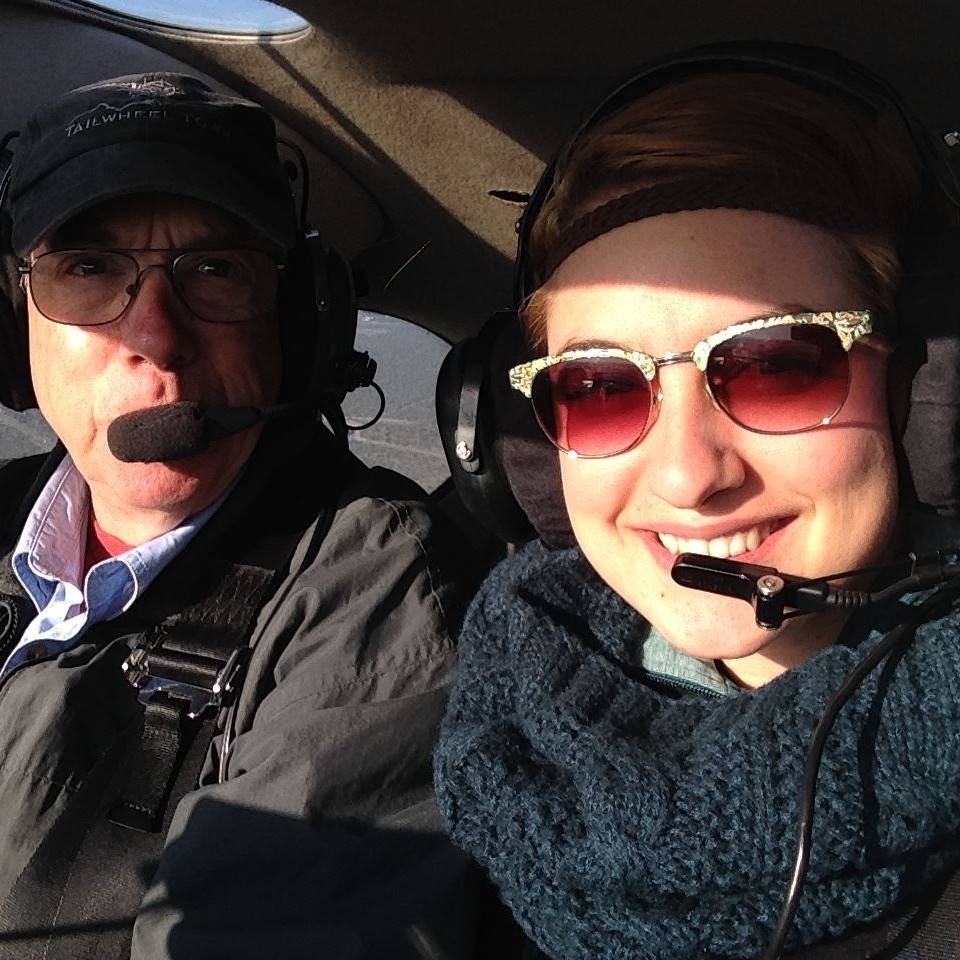 Welcome to Janet Lansburgh based at 6K5,Â Sisters Eagle Air Airport,Â Sisters, Oregon. Janet is the daughter of Brian Lansburgh, a #1 supporter of LadiesLoveTaildraggers who has donated thousands of dollars in CFI time and expenses in support of our scholarship fund. I am thrilled to see Janet flying the family C140 and read how life unfolds in a family who loves to fly. 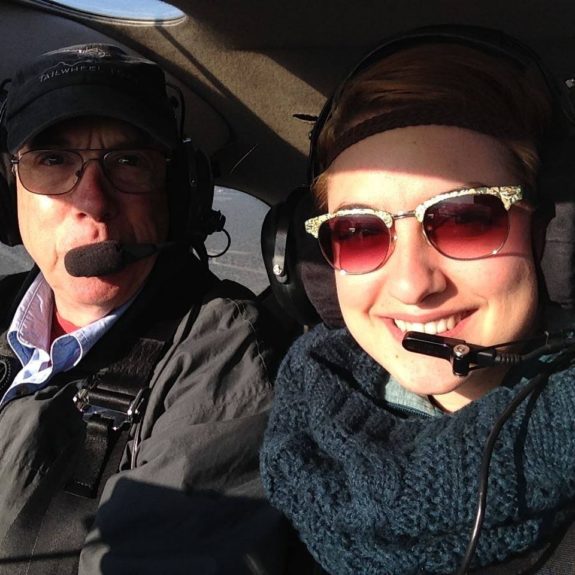 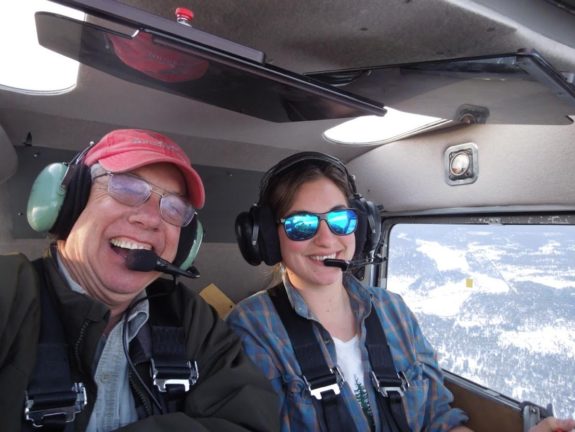 Janet Lansburgh pictured with her famous dad, Brian Lansburgh, on the day Janet did her first three point landing.

Iâ€™ve said it before and Iâ€™ll reiterate that a significant part (if not all) of my life was made possible by planes. My parents had an airshow act going until my older brother was born, and even when I was in utero, there were some aerobatics (I attribute my strong dislike of aerobatics to this)! My middle name, Tommy, comes from my parentsâ€™ dear friend, Tom Jones who was a stunt pilot and unfortunately passed away during an airshow in Oklahoma. He died before I was born, but this picture has been up on every wall of any house Iâ€™ve been in. Itâ€™s a reminder of where I come from and I think of Tom as a dear friend. 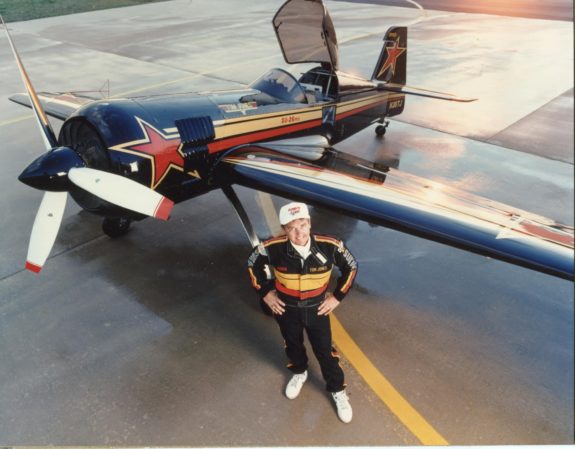 Because it was my norm, I didnâ€™t grasp the novelty that was/is my life or the fact that I had essentially grown up in a plane and FBOs. When our parents took us to Sun nâ€™ Fun flyin as kids, me and my brother being pulled around in a Radio Flyer wagon, they would make jokes about us being like little salmon going back to the spawning grounds. I didnâ€™t grasp the full aspect of these remarks until just a couple of years ago, thankfully! When I wasnâ€™t running around being a swamp rat in the backwoods of Florida, I was running around the tarmac of an airport, or riding my razor scooter in constant circles around a plane in a hangar. Some of my earliest memories are the smell of an FBO which was retired, old white guys in their khaki shorts and polos that also matched the FBO color scheme, their stale cigarettes unsuccessfully being covered by air fresheners with a hint of Folger’s coffee and donuts. I can still hear the gravelly voices, the muffled sound of planes outside and the sound of the transmitter behind the counter of merchandise that hasnâ€™t moved in a year. My babysitters were Australian or Polish skydivers, and accomplished pilots like Patty Wagstaff. 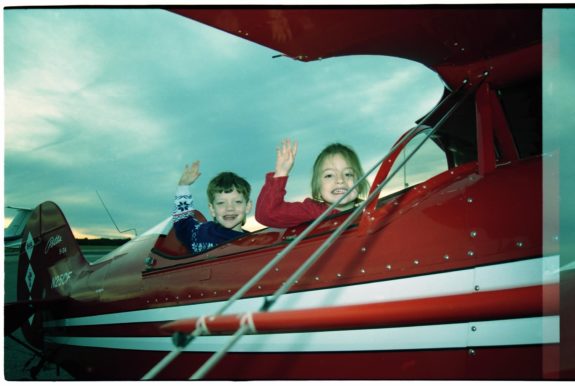 I am extremely fortunate to have grown up the way I did, but I was very much the little girl growing up around the boys club and my brother was the one that the “good â€˜ol boysâ€ saw being a pilot. I hold no resentment towards my brother on that, or towards the men that I spent a good portion of my childhood looking up to. They were wonderful people and mostly great pilots. Â But Iâ€™m not afraid to say that I am happily strutting in (yes,Â strutting,Â do what you will with that) and adding to the break up of the boys club that is the aviation world. Itâ€™s gotten a lot better, but sexism and misogyny are still abound and as a woman, I expect to experience that and â€œwell, not all menâ€, my whole life. I realize that I might be getting too political for some, but Iâ€™m being transparent about where I come from and how I was brought up to be. I will be unapologetically pro women and pro POC when it comes to aviation because I think we need that until the scales are balanced. Nobody deserves to fly more than the next person and I hope to be able to advocate for that equity with all the platform and privilege that I have.
Weâ€™re extremely fortunate to have a woman-centric community of pilots here and I hope it continues to grow in its support and diversity. 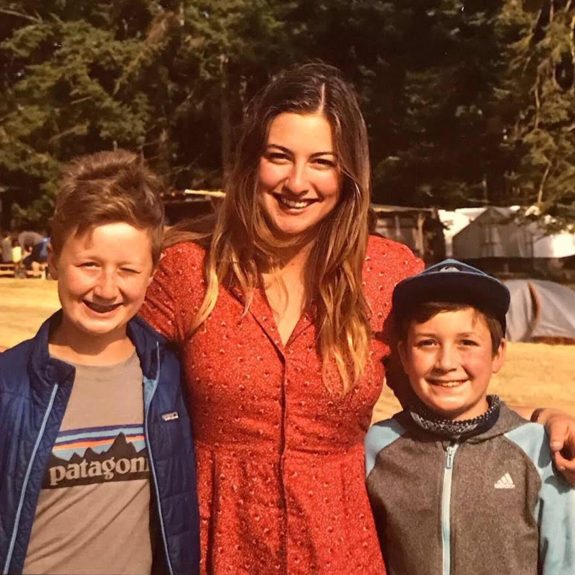