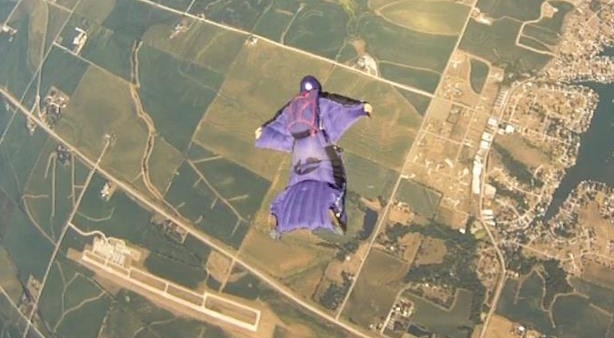 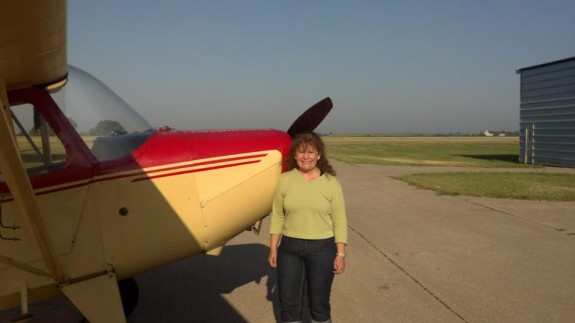 I have always want to fly for as long as I can remember. When other little girls fantasized about proms and weddings, I dreamed about flying. However, back in the 60’s such things were not only not encouraged in girls but I often got reprimanded by counselors for wanting to do things that girls were not suppose to do. Add to that growing up poor, all dreams were limited and seemed to be only dreams with little chance of reality. So I did what girls born in the 50’s were supposed to do, got married and had kids, but being stubborn I did not give up on dreams. So after 2 kids and a divorce, I went to college. I looked into flying a couple times taking introduction flights and loving it, only to realize I could not afford it. I eventually remarried and then came 2 more kids. After the 4th baby, I told myself I needed to do something for me and started flying lessons. Working 50 hours a week, with 3 kids and a baby, the only time I could find was early Sunday mornings when I would sneak out of the house before everyone was awake. It however was a harsh winter as Nebraska can sometimes have. I did not get to fly more than a couple times a month, so progress was slow and I eventually gave up, at least for the moment. Fourteen years later after another divorce, my oldest daughter signed us up for a tandem skydive, saying “Mom you have always wanted to try this and need to do it before you are too old.” While waiting I looked at some gear ads and thought this might be cheaper than flying and perhaps may satisfy my need to fly. I was immediately addicted, but even on my second jump was asking if any of the pilots gave instruction. 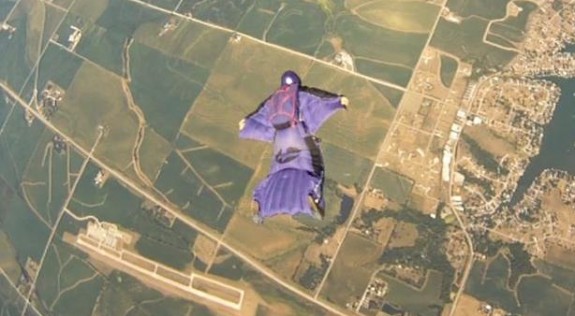 I broke my ankle on my third jump, and my daughter for Christmas gave me a certificate for an aerobatic flight in a T-6 Texan. The flight was heavenly. So now I was dealing with 2 addictions. I returned to skydiving before I even had my last appointment for the ankle, and have been jumping ever since gaining instructor ratings with over 1000 skydives, more than a third of which are wingsuit flights. This, however, only made my desire to fly the plane worse. After the 1st year skydiving I restarted flight instruction. This time I told myself I was not going to add up the cost and was going to stick to it no matter what. I achieved my private pilot license in 2002. I rented planes at first and enjoyed flying to different local airports on my own. Skydiving dominated some years, but a perfect day included both. I eventually joined a flying club hoping to work on an instrument rating. Most pilots want bigger and faster planes, and this club was the same looking to invest in bigger, faster planes. That was not what I wanted. I always flew by myself and had no need for more room or carrying more weight. Plus, after flying a wingsuit, the smaller planes seem closer to true flight. I found myself drawn to taildraggers but I never was able to find an opportunity to fly one.

Above picture; 1stÂ 250 nm cross country in the 172 while in my prior flying club. I spent the weekend in the tent waiting for weather to clear so I could go home.

Career and family made demands but I kept my license current. Then while working, I met a colleague whose husband owned a share in a Champ. It sounded ideal and I told her to let me know if there was ever an opening. To my surprise about a year later she called me and said they had an opening. The plane they had was damaged in an accident and some members had left the group but they were looking for a new Champ and would have openings. I filled out the application that day. 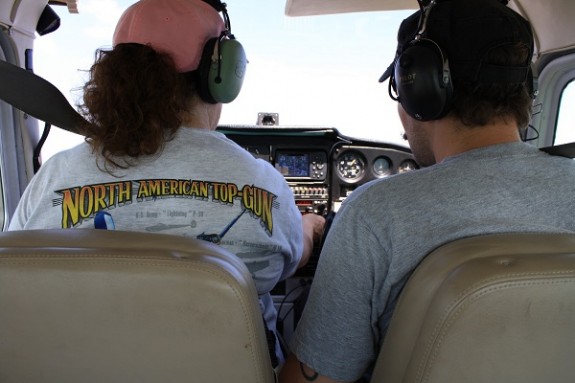 Taking my son up in the C172 prior to the taildragger

Well, it took a while for them to find the plane, a 1955 Champ. When I went for my 1st ride in it I knew it was what I had been searching for all this time. That was a year ago. The group included instructors, but I later found out they were frequently out of town and not really available. I eventually found a skydiver who was an instructor and willing to work with me. We started flying and I discovered how challenging a taildragger can be but also how much fun. Nothing seems to come easy and this was no different. Every time I was ready to solo in it something broke, the down side of older planes. Then Nebraska weather interfered. I kept coming back. Finally I got to solo a couple weeks ago and obtained my endorsement. I am finally able to take off into the beautiful blue sky in my little plane, even if I only own 1/8th of it. My long time dream is finally reality. The plane 48C was named by my grandson “Grandma’s Charlie Plane.” 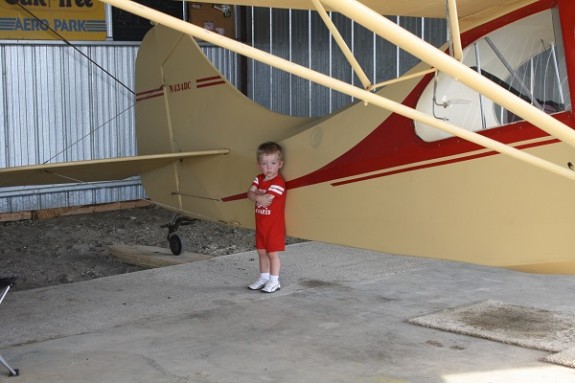 My Grandson wants a ride but his mother says “no”.