Hello everybody! Fall is officially here and I’m counting on some nice, dry, cool flying weather for awhile. I had a very busy summer flying every chance I got and I don’t expect that to change just because the weather is changing. My great niece Kaylise and sister-in-law Regina were in town last month and Kaylise couldn’t wait to get a ride in an airplane. She argued that her brother was her age when he got an airplane ride … like I was going to say “No”?! 🙂 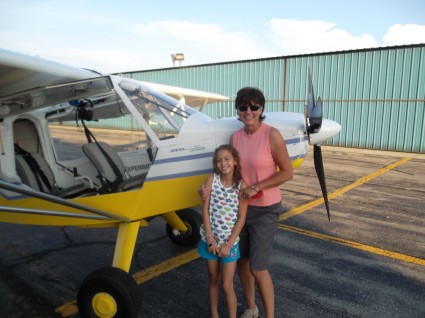 Boyd’s Mooney 231 was sitting right there and I think she was thinking “that’s pretty cool, let’s go in that!” Â I had to convince her how great a ride in the Rans S7 was going to be. I think I finally won her over when she realized the difference between sitting in a side-by-side airplane was having to look around somebody else to see out. You just can’t beat a tandem, stick airplane! 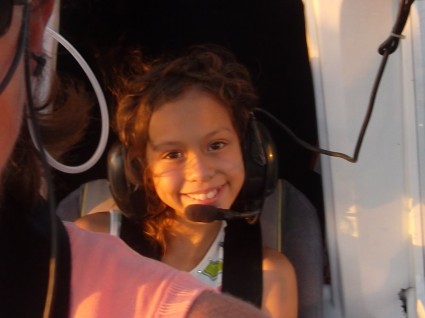 Kaylise having a good time wearing her headset. I've got my new Halo headsets on which are comfortable & quiet but I won't be wearing them with the doors open. They're so light they'd probably get sucked right out the door.

Kaylise was thrilled to get belted in, taxi out to the runway and watch & listen as I did the run up. Â She was as excited and happy a passenger as I’ve ever had and sooooo disappointed when I told her we were heading back to the airport. 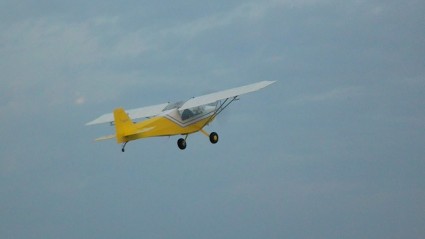 A couple weeks later I flew to Marion, Indiana for the Fly-in/Cruise-in and ended up doing an interview with local WIWU TV51. It was kind of fun being interviewed by a woman reporter and her woman camera crew! I may not have done a great job but they sure did! They made the rounds that day interviewing pilots and attendees for their 30 minute TV program “Crossroads” – here’s the very short “commerical” version if you’d like to take a look. The temperature was a sticky 98 degrees that day!

Keep on flying and having fun doing it girls. Life goes by fast and we’re only here once. Leave with no regrets.