Kathryn Brenner Finally Gets To FLY! 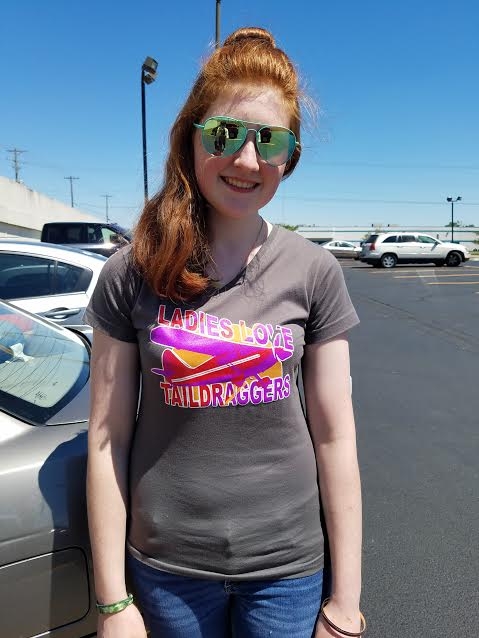 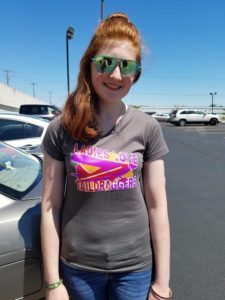 Sometimes the stars align and childhood dreams really do come true. Occasionally someone who deserves a break actually gets that chance of a lifetime. I met 17 year old, high school senior Kathryn Brenner yesterday, as planned and right on schedule at the Denny’s Restaurant in Lebanon, Indiana. She pulled up in an older, typical high-school kid kinda car, plastered with ‘I’d Rather Be Flying’ stickers and more, and wearing a LadiesLoveTaildraggers tshirt. I knew I was going to like her! Kathryn is from a small town that borders the Illinois/Wisconsin line and is living in a dorm at Purdue University for 6 short weeks while she earns her Sport Pilot ticket. I discovered she’s also perfectly irrepressible with a sparkling personality and gushing with excitement about flying. Kathryn has dreamed about flying since she was 3 and, right now, she’s living that dream.

Kathryn, “Kat” to her friends, is a type 1 diabetic (insulin dependent), diagnosed on her 11th birthday during summer camp. She is one of seven people selected by Able Flight to receive a full scholarship for Sport Pilot training at Purdue University this summer. Able Flight scholarships include transportation, room and board, approx 50 hours flight time, ground school and instruction. Each student is paired with a flight instructor who works one-on-one with them right up to the checkride. “Able Flightâ€™s mission is to offer people with disabilities a unique way to challenge themselves through flight and aviation career training, and by doing so, to gain greater self-confidence and self-reliance.”

Thank you to Kathryn for sharing her youthful dreams, her experiences with type 1 diabetes and her aviation goals for the future. Nothing is going to hold this future lady taildragger pilot back! 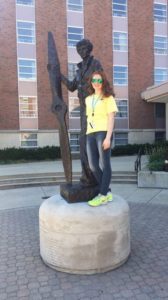 I can’t express how much this means to me. I’ve wanted to fly since I first set foot in a plane at age three. However, my dreams went into a tailspin when I spent my 11th birthday in the hospital with a diagnosis of type 1 diabetes. The psychologist, Dr. Jill, told me how I could do ANYTHING I wanted with diabetes as long as I planned carefully. Dr Jill then asked me what I wanted to do when I grew up. I confidently replied, as I had for almost eight years, “I’m going to be a commercial pilot.” I’ll never forget the look on her face as she told me I was able to obtain a third class medical to be a private pilot, but at that point in time, that was it. My dream career suddenly became nothing more than an expensive hobby on top of the constant medical bills. I spent the rest of that birthday learning how to carb count and give myself shots. It was one of the worst days of my life. 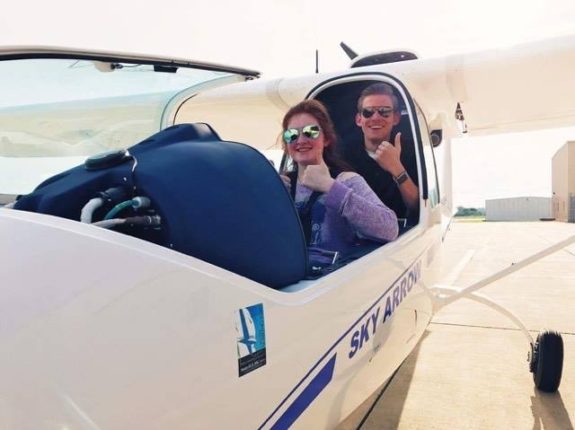 Kathryn with her instructor Zack Kukorlo

Since that time, I’ve come a long way both through and because of that diagnosis. Prior to ending up in the hospital, I had been at camp where the staff rearranged cabin assignments to let me finish the week since my blood sugar was not yet high enough to warrant hospital admission. I was supposed to avoid carbs that week to avoid diabetic ketoacidosis, which occurs when the insulin needed to burn glucose is missing. It can be fatal in less than a week. The kitchen staff were angels in disguise. I’d ask for an egg and they’d bring me a dozen. They’d bring me a plate full of cucumbers at every meal. The camp director at the time was one of those people who may not know exactly what you’re going through, but cares about you wholeheartedly. He’s been there for me during some really rough patches in my life and I don’t think he’ll ever know how much he’s influenced me. 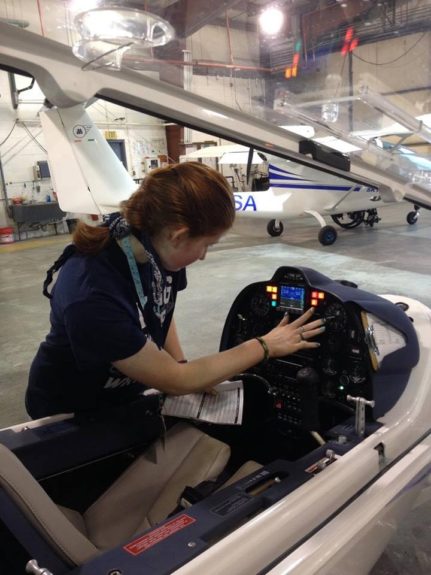 A year later, I started volunteering at Timber-lee as a thank you for everything they’d done that week. Six years later, I still volunteer regularly. I’ve met some of my best friends at camp. I’m so grateful for what came out of a painful situation. It’s shown me that God really does make everything work together for good.

In 2014 I got invited on United’s Fantasy Flight for kids with chronic illnesses. My 14 year old self refused to write a gift list, so instead I wrote a quite satire letter telling Santa how much I admired what he did for little children and requesting that he donate to Life For A Child instead of bringing me anything. United went so far above and beyond for me. I got made the Honorary Vice President and was given tours of both NHQ and ORD to learn about careers I could still have within aviation. They sent me to Denver to fly their professional training simulators, and donated $750 to LFAC. But most of all, they welcomed me with open arms at a time I was dealing with another organisation that didn’t want to bother with my malfunctioning pancreas. It was a horrible experience and I really wondered if I’d face that everywhere.

United showed me that wasn’t the case at all. Since then, I’ve returned as Princess Anna to help make the day possible for others. It’s absolutely amazing what they do to lessen the stress of living with a nonstop chronic illness. Having someone step in and care that much means more than anything. I absolutely love being part of it for others. 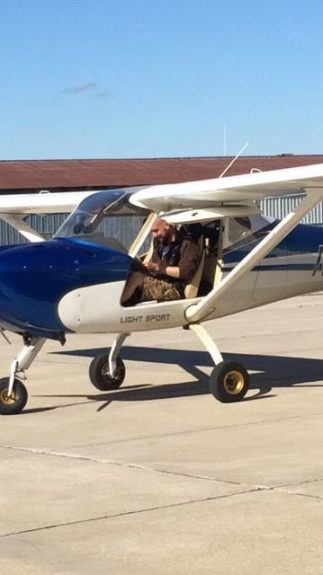 Life with diabetes is a daily struggle. I’m not going to deny that. I count and bolus insulin for everything I eat. I stick my finger to test my blood sugar about 6 times a day. I realise three hours away from home that I forgot to pack the insulin that keeps me alive and my brain says “Dude, you’ve been doing this for six years. What is wrong with you?” Or worse yet, I discover that I’m allergic to all three types of fast acting insulin. Two of them give me these awful staph infections that are more painful than anything I’ve ever felt. And the third gave me a pounding headache that left me snapping at everyone I care about over the stupidest things. It never quits.

Then on top of that, people say things like “What, did you used to eat only deserts and not exercise?” “If you take ________ it’ll go away.” or “I wouldn’t be able to give myself a shot. I don’t like needles.” and caption Instagram posts “diabetes on a plate 🍰” Here’s the thing: it’s an autoimmune disease that no amount of cinnamon will cure. My immune system killed my beta cells regardless of the fact I’ve eaten a healthy diet long before diagnosis; now I have to either take shots or wear an insulin pump if I want to live. (Which I do, because I’ve got a pretty great life!) Â And when given the choice between that needle you ‘couldn’t’ use, and being dead in a week, that needle begins to look like a pretty good option. 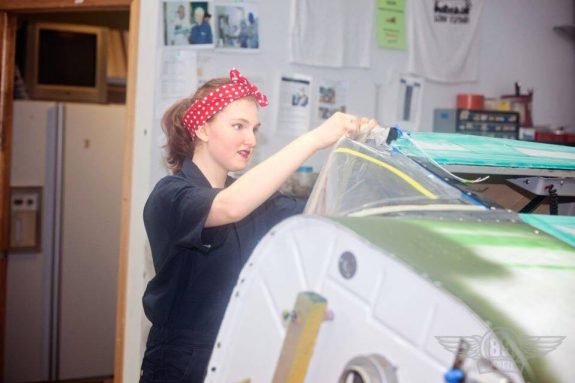 Dressed like Rosie the Riveter, Kat at her high school 88C program. Each 20 hours worked on aircraft projects can be exchanged for 1 hour flight time.

But this isn’t a rant or a pity party. It’s my life. And I’m thankful for it, broken pancreas and all. I may never be a commercial pilot, but I could be. It was legalised with T1D on April 22, 2015, but no one has actually gotten a medical through yet. I’m not ready to risk pursuing a career that I might not be able to get into. But I’ve always loved working hands-on and figuring out how things work. Aviation Management/Maintenance may not be where I saw myself originally, but it’s a good fit and I’ll be happy. And this summer, I’ll be a licensed pilot because of Able Flight and my disabled pancreas. I’m thrilled. It means the world to me. Life is hard, but if it weren’t, I wouldn’t be where I am today. I wouldn’t have met some of my best friends, my mentors and role models. I was once challenged to let God show me the good in every situation and be thankful for it. I can’t say I’m thankful for my diabetes, but there have been some truly amazing things that have come out of this. And I wouldn’t change that. But I would still like a cure. You never know how strong you are until being strong is the only option.