LLT on the Stearman Flight Team! 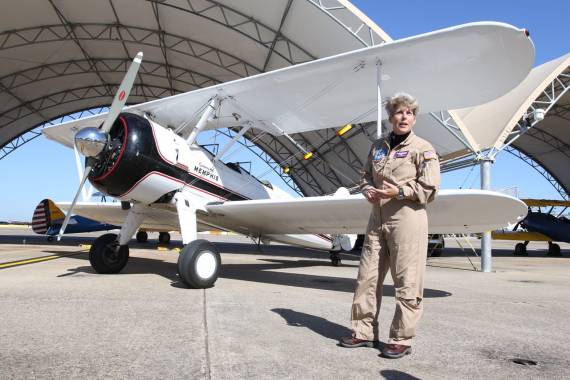 The Pensacola News Journal highlighted one of our LLT members last weekend. Julie Thomas flew her Stearman named “Queen of Memphis” as part of the Veterans Flight in the 2019 Blue Angels Homecoming Air Show in Florida. She was part of a 6 Stearman flight that entertained the crowds with their formation skills.

The Stearman Flight Group, of which Julie is a member, hones the sometimes lost art of formation flying in Stearman aircraft. They train rigorously and often to perfect their skills and fly about 20 teaching clinics and air shows a year. But this was the first time Julie had flown in an air show with the Blue Angels!

The Stearman Flight Group also sets their mission as keeping the heritage of this classic WWII trainer alive. Julie’s own Stearman earned its keep after the war as a crop duster. Now it’s helping to remind young and old alike of times that are bygone, but still so significant in history for the role the Stearman played as a primary trainer for US, Canadian, and military pilots of many other countries.

As an Air Force C-141 pilot for ten years and now a FedEx Captain flying an Airbus A-300, Julie has certainly experienced a wide variety of flying. The fact that she’s currently the only woman in Stearman Flight makes no difference to Julie. But if she can inspire any young women who see her fly, that’s just another bonus.

“The World War II veterans love having Julie as one of their pilots and many say she reminds them of the WASPs (Women’s Air Service Pilots) who played a major role in America’s victory and WWII,” said Roy Kinsey, another member of the Stearman Flight.

Julie has attended many LLT fly ins – Tennesse, Illinois, Texas, and Louisiana to name a few. And if you don’t see her flying in her gorgeous white Stearman, you might see her as captain of another taildragger – her Maule M5. Check out those awesome tires! And I think there might be a Decathlon and some other taildraggers in Julie’s hangar – sounds like she has her priorities straight:) Without a doubt, she’s one of the ultimate ‘Ladies Who Love Taildraggers’!

Julie modestly downplayed the significance of her achievements in the interview with the press, but we know she’s amazing and we’re so proud that she’s a member of Ladies Love Taildraggers!