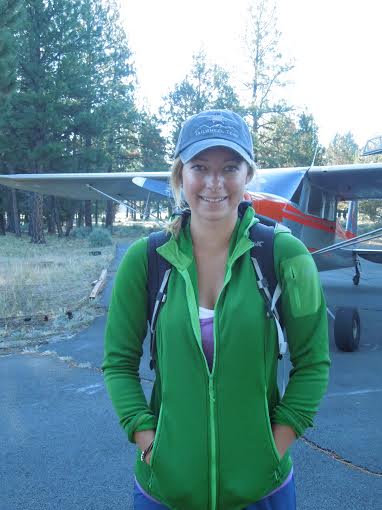 Wyoming pilot Stirling Moore is our LadiesLoveTaildraggers 2015 Tailwheel Endorsement Scholarship winner. Her training has been scheduled for some time and Stirling’s been patiently waiting. I’m happy to report she’s now at Sister’s Airport in Oregon and has begun her training with Brian Lansburgh – and impressing the locals already!

Stirling Moore ready to take on her Tailwheel Endorsement

Here is question #1 on the LLT Scholarship Application and Stirling’s response:

You are a pilot. What made you want to learn to fly?

My answer to this question is more of a â€œwhoâ€ than a â€œwhatâ€: My father. My dad has been a rancher his entire life, but had the opportunity to learn how to fly as a young man. He took it, and has since flown a variety of aircraft for a wide range of ranch applications over the past 50 years.

He has used an old Cessna 182 for as long as I can remember and I spent my childhood tagging along on every flight with him that I could. We would take off by sunrise, then overfly our pastures to find where the livestock were located and get a sense of what all needed to be done that day. All the while I would pepper him with a barrage of questions about flying, which he would patiently answer and usually follow up with a wry story of his own. So it would go for the hour and a half that we flew, then weâ€™d land and go saddle up for the dayâ€™s work with the rest of our family and friends.

As I grew older I started to wonder why day after day, even after a lifetime in aviation, he was perfectly happy to do something as mundane as ferry an excited little girl around to count cows. It wasnâ€™t mundane for him, though, and when I realized that I finally understood he was having just as much fun as I was. All of those early morning adventures around the ranch were my dad sharing with me his passion for aviation. I was utterly fascinated, absolutely hooked, and couldnâ€™t wait until the day that I, too, would be a pilot. 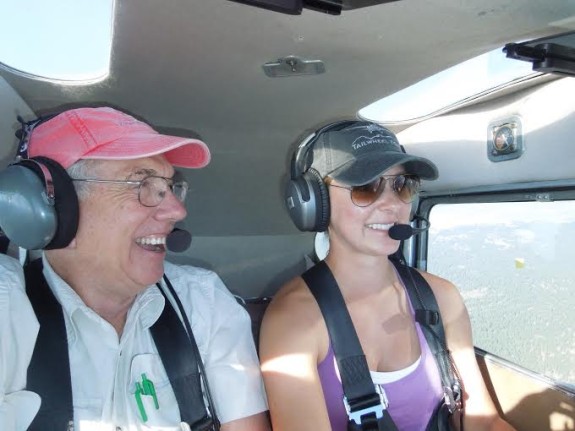 Brian & Stirling kicking off the training.

Brian and Stirling look like they’re having a great time already. Brian reports,Â “We had a good flight this morning and the gang at Sisters thinks that Stirling is the catâ€™s pajamas. She waded right in and helped with our Great Rubber Chicken Fling rehearsal and is now on the Chicken Flinging Team for our annual Fourth of July Fly-In.”