Lori Adams, 81, of Â Smithville, Texas flies a 1967 Citabria and has logged 29,000 hours in 55 years.Â  She continues to fly aerobatics in Smithville.

The red-headed pilot takes precautions before she flies the 1967 single-engine Citabria she co-owns with friend and former student Austin Wambler.

She checks the fuel and oil, gives the plane a once-over and never flies in bad weather, except for occasions like two weeks ago at the Smithville Municipal Airport Fly-In, when, despite looming clouds, she gave onlookers a show of airplane aerobatics. On a recent Sunday, she guided the plane in loops, spins and dives for onlookers, moves she’s done for so long they no longer thrill her, but people enjoy them so she continues them.

Born the year Charles Lindbergh flew the Spirit of St. Louis in the first solo nonstop trans-Atlantic flight, Adams said she hesitates to share her age lest it deter passengers or students from flying with her. “They’ll see an old woman, and they’ll say, ‘I don’t want to fly with that old grandma.’ ”

Bubbly and energetic, when Adams isn’t working her four days a week at Smithville’s Brookshire Brothers petrol station, she’s flying or at the airport.

She’s called the Queen of the Airport Bums, according to the group of pilots and airplane aficionados who hang out at the Smithville airport, because she’s the only woman of the bunch.

Adams spends many of her weekends there, where she and Wambler keep their plane in a hangar they also own. Sometimes they go for a “$100 hamburger,” pilot-speak for the cost of the fuel it takes to fly to another town for a burger.

“This is where she comes into her own,” Wambler said as Adams took off for a solo flight to show off her aerobatic moves. “When she gets into an airplane, she goes into her own world.”

Adams began flying in her early 20s, but her interest in aviation started when she was a child in Smithville.

“I jumped from the hayloft into the hay,” she said. “I thought I wanted to fly.”

In her teens, she tried to join the Women Airforce Service Pilots, who flew military aircraft during World War II, but she was too young.

Adams finally had a chance to fly in a plane thanks to acquaintances. She worked as a photographer snapping pictures of patrons at a nightclub, and the band director took her up. Her roommate’s boyfriend gave Adams her first lessons in Dallas in exchange for paying her roommate’s share of the rent for a month: $50.

The first time Adams flew alone, in a J-3 Cub, the control stick used to fly the plane from the back seat came off during the flight. She managed to land safely by climbing into the front seat, but the incident scared her.

“I quit flying for about a year,” Adams said. “With the stick coming out, I thought the good Lord didn’t want me to fly.”

She eventually got back in a plane, obtained her license and moved to Houston. She married Dick Adams along the way. He died in 1960 when his crop-dusting plane went down because it was overloaded. She never remarried.

In 1964, Adams opened a flight school at Houston’s Hobby Airport, where she stayed until the 1980s when the airport became too congested to handle small planes. She then retired, returned to her hometown and started giving instructions in Smithville.

Although she no longer teaches, with 29,000 flying hours, Adams doesn’t have plans to slow down.

Federal Aviation Administration rules require commercial passenger pilots to retire by 65, but there’s no age limit for other pilots as long as they pass regular medical exams.

Adams said she will fly “till I die.”

Adams said the only trouble she has getting around is caused by a pesky ankle injury she got skydiving; she jumped out of a plane two years ago and caught her foot on the way out â€” “a freak accident,” she said. And Adams wants another go at skydiving â€” without the broken ankle.

“I want to make a good one,” she said. Citing former President George Bush’s skydiving trips in his 80s, she said, “It’s no big deal.”

Â This picture of Lori Adams from 1966 was sent by Jerry Griggs, a former line boy for Lori. Â (See Comments). Â Lori taught Jerry to fly in 1967 and Jerry taught his daughter and her best friend to fly his Aeronca “K” when the girls were 16. They are featured on this website at Janice & Andrea\’s First Solos . 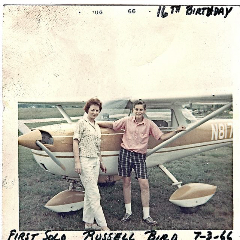