Lorrie’s June 2, 2010 Update:
I havenâ€™t updated for awhile, so will let you know that I flew the Pawnee on Motherâ€™s Day, got my 10 t/o and landings in and 3 supervised tows. Then the next two Sundays Iâ€™ve been officially towing â€“ once for the CAP kids who came over for a camp-out at the glider club and this Sunday for my own crew. The most difficult element for me so far is the heatâ€¦ Ohio hasnâ€™t had much until recently and now it has been here in full force. This last Sunday I ended up with a nice little heat rash around my neck, which took two days to clear up and was very itchy! 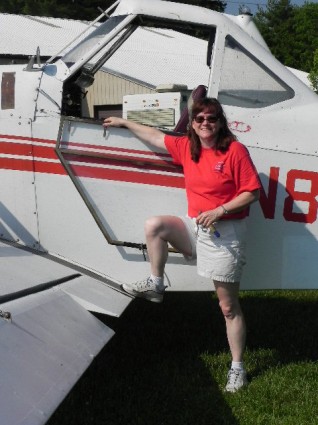 I’m having a blast towing gliders in this Pawnee!

For the glider photo – so this isn’t really a taildragger I guess, but maybe a bellydragger? Â I flew the Pawnee towing gliders in the first half of the day, then had the opportunity to fly the ASK21. It is a nice smooth ride in this glider. Very easy to fly. Quite slick and have to watch the landing speed. Â We found some thermals for about 15minutes. Rose 800 feet in about 3minutes. I gave myÂ IAC34Â friend Â Eric a ride and he is now considering bringing his daughter out to learn to fly gliders. Â 🙂 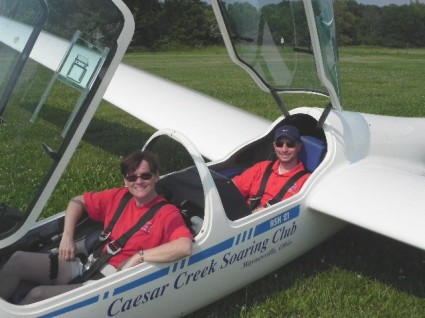 This is the photo after I flew with Emerson Stewart for my 5 flights for the generic tow pilot check out and endorsement. Â I flew the Citabria with Emerson instructing and Gordon was our glider pilot. 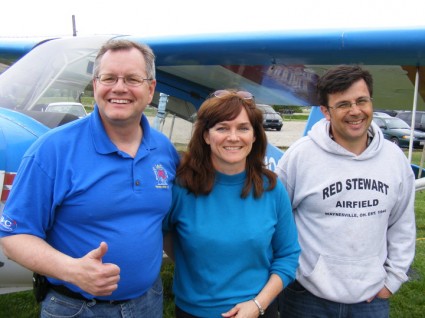 Lorrie flying Citabria as tow-pilot, with Gordon on the left and Emerson Stewart on the right

I took Gordon for 3 pattern tows, 1 emergency rope break and a flight where Gordon pulled me around alot doing “box the wake” and “slack rope”. Â In some ways, learning to tow a glider was easier than I imagined. I was extremely thankful that I had experience in a speed boat towing a water skier. Â Much the same sensation with reduction in power and adjustment to the guy behind me dragging me around at the end of the rope. Â Next step – learn to fly the Pawnee that we use at the glider club. Maybe tomorrow if the thunder storms will stay away long enough!