Love is in the Air

Sandy Newfang, formerly our very own Sandy Krier,Â nonchalantlyÂ sent me a link to an article today about her recent wedding in Florida. (Did I mention I love weddings?!!) Especially when its a pilot’s wedding. Really especially when it’s a TWO pilot wedding. I love-love-loved this story, not only because the beaming bride is one of our passionate lady taildraggers but Â because the groom seems to be just as obsessed with flying! Check out the story by Tampa, Florida based “Neighborhood News” and read about â€œWedding Flightâ€ 1, 2 and 3.Â Congratulations Daniel & Sandy!! 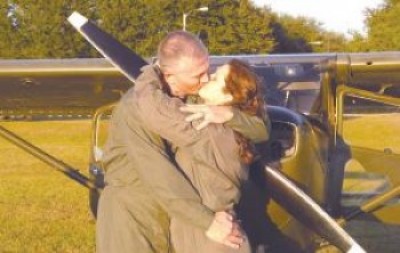 Newlyweds Daniel and Sandy Newfang have a smooch after getting married one mile over Pasco County.

A voice crackled across an air-to-air radio frequency, one mile high in Pasco County, â€œAnd do you, Daniel Newfang, take Sandy to be your wife? To have and to hold, from this day forward, for better, for worse, for richer, for poorer, in sickness or in health, to love and to cherish â€˜til death do you part?â€

And with that, pilot Daniel Newfang pulled his Cessna 150 into a barrel roll, spinning the single prop airplane into a celebratory corkscrew because he and his new wife Sandy had just tied the knot, while doing the very thing that brought them together.

â€œIt is just amazing to be able to share your passion with your partner,â€ says Sandy. â€œFlying is something that we both love.â€

Daniel and Sandy met about four years ago at the annual Cessna 150/152 Foundationâ€™s â€œFly In,â€ a four-day event at the airport (KCWI) in Clinton, Iowa, where pilots from all over the world come together for the largest concentration of Cessna 150s and 152s youâ€™ll find anywhere. Daniel had traveled from his home in New York and Sandy from Tampa. They met and became friends who shared their love for all things aviation. For the next three years, they would catch up at the Fly In, until Daniel was offered a job at the University of South Florida and they started dating.

The newlyweds both come from a background of pilots and are self-confessed plane junkies. Daniel is a thirdgeneration flyer who also has a son who is a pilot. Sandyâ€™s father flew, as well. She says that once they decided to get married, they knew that they wanted a wedding with an aeronautical theme.

â€œWe thought about having the wedding inside one of the (airplane) hangars,â€ says Sandy. â€œBut then, the idea of getting married while flying came up and we just decided to do it. We still wanted to keep it short and sweet, though.â€

â€˜Wedding Flight 1â€™ touches down at the Tampa North Aero Park after a memorable flight on New Yearâ€™s Eve - Photo courtesy of OurTownFLA.com

â€œIt was great,â€ says Cluck, the President Elect of the Greater Wesley Chapel Chamber of Commerce. â€œIâ€™ve done some pretty unusual weddings (including one at a rodeo), but this was definitely the most unique.â€

To make things official, as well as memorable, Daniel and Sandy gathered three planes together on New Yearâ€™s Eve â€” a Cessna 150 for them to fly, a Cherokee 140 (piloted by their mechanic, Rob Cevasco) for Cluck to mechanic, Rob Cevasco) for Cluck to ride in in order to read the vows over the radio, and a Cessna 182 which was packed with the coupleâ€™s close friends, Tracey and Mark, and Sandyâ€™s two children, Jessica, 19, and Sean, 15, who were the witnesses.

A small group of close family and friends also gathered together outside a hangar at the Tampa North Aero Park (located just off S.R. 54 in Lutz, just outside of Wesley Chapel), to watch the planes take off from the airstrip and climb to 5,280 ft. (one-mile high), where the couple would recite their vows over an air-to-air radio frequency with Cluck.

The three planes, which were named â€œWedding Flightâ€ 1, 2 and 3, respectively, soared around the Wesley Chapel area, with only about 100 yards between each of them, for a 45-minute flight before coming back down to the ground with the new married couple.

The Cessna 150 Sandy and Daniel have is equipped with dual controls that allow for two pilots to â€œshare the loadâ€ of flying the plane. Daniel handled the take-off of the airplane and Sandy was the one who landed it.

The newly married couple, who recently purchased a home directly across the road from the Aero Park, are excited about beginning a new chapter in their lives, which are largely anchored by the local aviation population. They each have their own airplanes, both of which are Cessnas, which they both fly as much as possible. Sandy says that they would eventually like to build a home on a piece of land that they own at the Aero Park, but for now, they are content living close to the small airport.

And the honeymoon? The couple plans to travel to Australia (commercially) and then pilot a Cessna to different cities around the country.