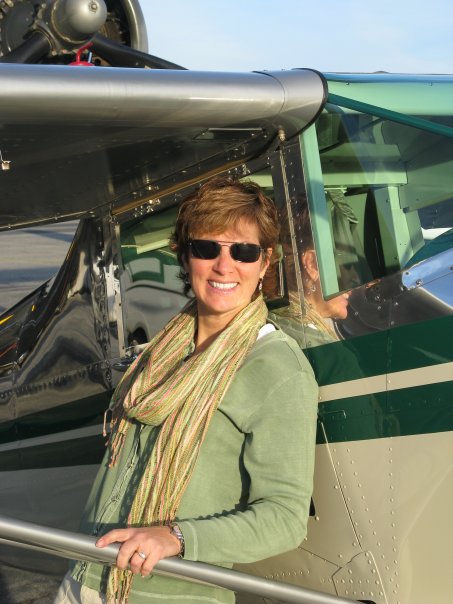 by Andrea and Kevin Eldridge

8/26/2013Â 6:AM DEPARTING CABLE AIRPORT, CA (CCB) FOR BLAKESBURG, IOWA (IA27). Incidentally, both are private, familyÂ owned fields.Â Check out www.antiqueairfield.comÂ and www.cableairport.com. Due to a line ofÂ weather out by Palm Springs we decide to delay our takeoff for two hours and instead have coffee with our friend Mike Polley at Maniac Mikeâ€™s, the airport cafÃ©.

8:AM CCB – PSPÂ We decide itâ€™s time to get underway andÂ officially depart on the longest trip weâ€™ve ever taken in our small airplane. Unfortunately the GPS database wonâ€™t upload and we have to run home and reconnect it to our computerâ€¦really?

9:AM PSP – CGZÂ Off like a herd of turtles. After one hour of flying we land in Palm Springs. For the first time ourÂ little plane is sitting on the ramp outside in the rainâ€”boo hoo! First time we try out ourÂ airplane canopy cover to keep the rain out. For the first of many times in the coming week weÂ borrow a free airport car and drive to lunch. Finally at noon we are really on our way with aÂ decent 3.5 hour leg. We are flying along munching on pistachios and listening to the NeilÂ Diamond soundtrack to Jonathan Livingston Seagull generally feeling pretty good aboutÂ ourselves. We notice a black wall in front of us and what appears to be smoke from a fire.

Turns out itâ€™s the dust storm in front of the lightning and rain storm that brought on theÂ flooding in Arizona everyone across the country saw later on their nightly national six-o-clockÂ news. We quick did a quick 180 and were concerned we would not be able to outrun theÂ monsters. We backtracked to the nearest airport behind us 23 miles away. After landing weÂ scoured the place to find an open hangar or even an open FBO of which there was none. It wasÂ past 4:30 pm and everyone had gone home for the day. We quickly tied the airplane andÂ controls down under an overhang figuring whoever owned the spot was not going to use it inÂ the near future and just tied the canopy cover on when the dust storm hit. The visibility sank toÂ about 1 Â½ mile and our bare legs in shorts were getting sand blasted with grit. It was almost aÂ relief when the rain storm came but there was no place to hide. We were sopping wet ratsÂ when we called the hotel who informed us that we could not be picked up at the airport due toÂ the storm. The taxi cab companies said the same thing, are you not aware there is a big storm?

Thatâ€™s when we noticed the taxiway was starting to flood. With no one coming to our rescueÂ and nothing open we found a medivac helicopter building and the team in there took pity on usÂ where we waited out the storm until they could pick us up. On the positive side, at least it wasÂ 80 degrees in the rain. I was never so happy to see a Best Western Hotel or a Dominos Pizza.Â What a way to begin the first day.

8/27 9:AM CGZ – DMN Â After a rough first day we decided to give our next day some extra thought after our eye-opening and skin drenching experiences. We flew our first 3.5 hour leg to Demming, NewÂ Mexico, but decided it was too high and too hot to go over the mountains in the afternoon 100Â degree heat of the day and with these late-in-the-day summer storms popping up called it anÂ early day. The winds were distinctly not in our favor. At this point, we were now headed forÂ the La Quinta Hotel in the airport car a full day behind schedule. The weather sure changes fastÂ out here! I used to have these beautiful visions of New Mexican cities Albuquerque, Taos andÂ Santa Fe but Iâ€™ve since changed my tune after seeing miles and miles of barren desert coveredÂ by oil derricks.

8/28 6:AM DMN â€“ HOB â€“ CSM – AAO Â At this point we figured things had toÂ improve and we had better shake a leg ifÂ we were going to get anywhere nearÂ Iowa this week. It was our longest flyingÂ day with a grand total of 7.5 hours.Â (Incidentally, we could have flown fromÂ LAX to Iowa and back two and a halfÂ times had we been in an airliner today.)

We saw an unspectacular sunrise, flew through some sprinkles and over El Paso, Texas saw theÂ Mexican border. We were grateful for an overcast layer that kept the sun out of our eyes as weÂ flew Eastbound. We made fuel stops in Hobbes, New Mexico after a 3 hour leg, and Clinton,Â Oklahoma after another 2.5 hours. The airport manager who kindly dropped us off in town forÂ lunch had a bumper sticker on his car that read, BEWARE: FARTAHOLIC â€“ Enter at your own risk!Â Unfortunately, I didnâ€™t see that one until after I got outâ€”bummer. Finally we were catching a break and a tailwind for our final 2 hour leg that day. After landing near Wichita, Kansas atÂ Jabara Field we were greeted by our dear friends, Paul and Gail Bowen who, recognizing ourÂ need for rejuvenation, took us under their wing for a wonderful dinner complete with dessert,Â drinks and great conversation. We stayed at their beautiful home on the lake. Thank goodnessÂ for hospitality on the road.

8/29 9:30AM AAO â€“ IA27 Â A wonderfully quiet and cozy night brought us to breakfast at Stearman Field fortified for theÂ last leg of our outbound trip. After a relatively short 3 hour leg we landed at Antique Airfield inÂ Blakesburg, Iowa! And only a day late which was fine because we had actually given ourselvesÂ 4 days to get to destination thinking it would only take us 3. It was quite an interesting shortÂ final seeing that grass strip with a big dip followed by a crest on the other side at the beginningÂ of the runway along with a gravel road cutting across midway down the field for the first time.Â But our landing was uneventful; thank goodness after seeing the grand number of people inÂ observance from the peanut gallery! Having never been there we had no idea where to taxiÂ but were directed to park. We didnâ€™t know how lucky we were (and were so grateful later)Â we were right smack dab in front of the first line of airplanes on display in front of the Pilotâ€™sÂ Pubâ€”choice digs for the next four days and prime viewing of the landing strip, beautiful grassÂ and green hills. Walking distance to breakfast, lunch and dinner where â€œWalking Tacosâ€ were aÂ revelation and I heard they can also be made with Fritos.

8/29 â€“ 9/1 ANTIQUE AIRFIELD -Â AAA FLY-IN 2013 – BLAKESBURG,Â IOWA Because we had no extraÂ weight and room in our littleÂ Luscombe we decided camping wasÂ not an option. We would travelÂ light, stay at the Hotel OttumwaÂ (where I looked for Radar every dayÂ while Kevin looked for Starbucks)Â and buy lawn chairs at the localÂ Walmart. We drove the long way there and back just to see the fields, old barns and armÂ houses of middle America every day. We spent leisurely days meeting and talking withÂ wonderfully sincere and fascinating aviators from all over the country including our graciousÂ hosts the Taylors; from Washington State Mike and Karin Culver, phone and facebook friendsÂ like the hard-bargaining Harmon Dickerson and swimming daredevil Elroy Hilbert, and manyÂ members of Judy Birchlerâ€™s Ladies Love Taildraggers including Sharon Tinkler who flew her ownÂ Luscombe in from Tennessee. I especially enjoyed making a new friend in Elaine Huf whoseÂ â€œBamboo Bomberâ€ Cessna T-50 airplane was parked in the row across from ours forcing her toÂ pass us every time she walked across the field. I discovered she had been a cop, raced in theÂ womenâ€™s derby, lived on her own grass strip in Pennsylvania, mowed a lot of grass and ownedÂ her own tailwheel airplanes one of which was painted PINKâ€”my kind of gal! At the SundayÂ dinner we came away with an award; quite an honor given all the fabulous airplanes inÂ attendance. Given that we were all celebrating 75 years of the Luscombe 8 there were a recordÂ number of airplanes including around 70 Luscombes! What an unforgettable Fly-In experience!

9/2 8:30AM IA27 â€“ TVK â€“ MPR – BGD Â On the way home we chatted over the radioÂ for a couple of days with our CaliforniaÂ buddies, brothers John and Joe Pribbilo afterÂ a short fuel stop at Centerville, 3 hour leg toÂ McPhereson, Kansas and stopped in Borger,Â Texas for the night after a 6 hour flying day.Incidentally, Borger is the home of the largestÂ inland oil refinery in the country owned byÂ Phillips 66. They had a brand new FBO atÂ Hutchison County Airport with a planningÂ room, pilot rest room, beautiful bathrooms, kitchen and waiting room with television that allÂ still smelled of new leather not to mention their two free airport cars.

9/3 7:30 BGD â€“ CNM â€“ DMN Â A short fuel stop at Carlsbad Cavern City Airportâ€™s which contrary to the AOPA information hasÂ a beautifully paved runway next to Chandler Aviationâ€™s FBO. This would make a great for cross-country flying destination. Another FBO with beautiful leather smelling facilities, free airportÂ cars and it is 25 miles from the Caverns. We continue on to Demming again where we figuredÂ the Tex-Mex food was worth another try after 6 hours of flying.

9/4 7: AM DMN â€“ BXK â€“ CCB Â Fuel stop in Buckeye, Arizona and a final 6 hour day. After skirting more rain around PalmÂ Springs againâ€”weâ€™re home! What a trip of a lifetime together. The furthest weâ€™ve ever flownÂ our little Luscombe and without a mechanical hitch. Keep making memories and fly safe!

(*NOTE* On a sad note, Elaine and her husband Tom Huf passed away in their airplane when itÂ crashed during a storm 3 miles from their home airport returning from Blakesburg and will beÂ sorely missed by many.)