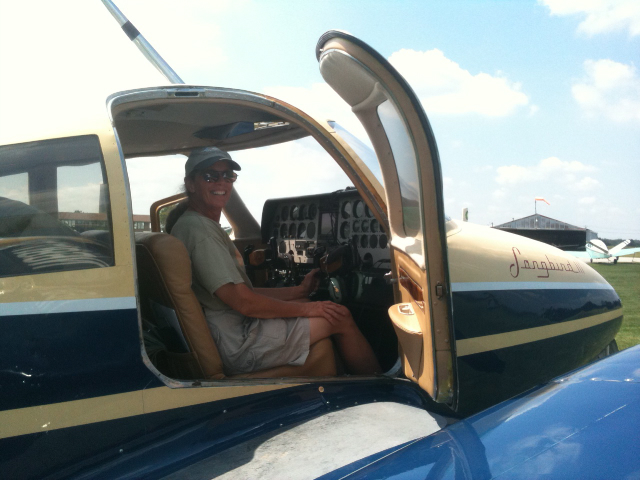 Morning dawned at Ann Arbor, Michigan with a few little puffies in the distance, the SupercubÂ was packed with clothes and camping gear, full fuel, new charts, and a restless desire to launch. An hour later, those little puffies in the distance became a solid 500â€™ overcast, prompting me to look for the nearest airport. Out my right window was Sturgis, MI, and so with no other traffic, I made a nice quick landing and taxied up to the FBO.Â  They didnâ€™t even know someone had landed (I love it when I can land before anyone knows Iâ€™m there). They were quite friendly and let me hang out until the overcast lifted. An hour later I borrowed the crew car and went into town for lunch.
Â 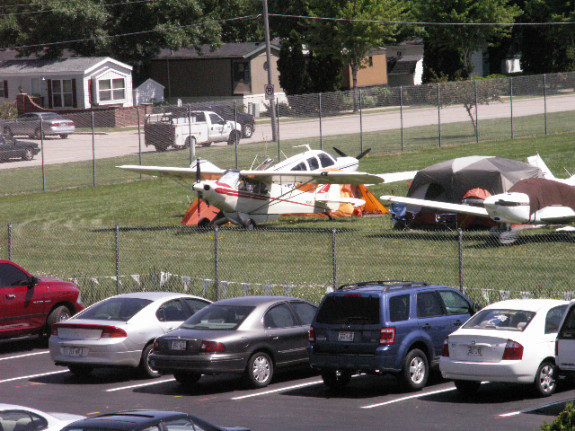 After waiting it out for three hours, I was on my way again. Boink! went something in my head. Doofus, why didnâ€™t you get fuel while you were there?Â  I wasnâ€™t thinking about fuel as I had only flown a little over an hour, but I donâ€™t like stopping around Chicago, and I didnâ€™t have enough to get to Poplar Grove. Oh, thereâ€™s Valparaiso, they have fuel, so I think Iâ€™ll stop there. â€œValparaiso traffic, Supercub 85SD, inbound landing.â€Â  â€œAnnie, is that you?â€Â  Boy, was I ever surprised! Â I had never stopped there before and knew no-one for miles around.Â  It turns out it was a friend of mine working with the Collings Foundation, headed out on a photo shoot in their B-24, and VPZ was one of Collingsâ€™ stops on their tour.Â  Since I already determined I would miss the pre-airshow entry to Oshkosh, I stayed for lunch (again) and a visit.
Â
Two hours later, with full fuel, I was on my way northbound.Â  Landing at Poplar Grove is always a treat, with the beautiful long grass runways and a chance to visit with Tina and Steve Thomas.Â  After a tour of the grounds, meeting some of the local airport folks, playing with the dogs, and an invitation to stay overnight with Tina and Steve, we enjoyed a beer and burger at a hangar party. Did I mention that Poplar Grove is one of my favorite stops?Â  The next morning I took off for Oshkosh, landing there early with the light pre-rush traffic. Two days, one overnight, and a lot of fun, for what is normally a 4.5 hour trip!
Â
I forgot to take pictures of that part of the adventure, but I could point out where I was camped from the LLT lunch at the Hilton Inn. It was fun to play a trick on Judy with the guys camped a few spots down from me. They were having a great time, sitting by their Champ and drinking some adult beverages. I stopped by on my way to the LLT lunch, and said that a friend of mine was going to be heading towards my campsite, and would most likely stop and talk about Champs, since she used to own one, but now owns a Rans S-7.Â  And guess what happened?Â  Judy stopped by to talk to the Champ guys, and they acted like they knew all about her!Â  Itâ€™s a really small world at Oshkosh! 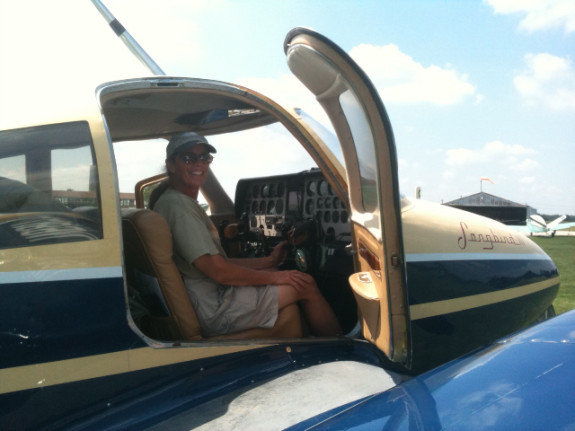 I stopped again at Poplar Grove on the way home to say hi and fuel up, and ended up having lunch with Steve and Tina, and Jim and Jimmie Rollinson.Â Â Jim & his dad Jimmie had flown the Songbird from California for Oshkosh, and are two of the nicest guys. Back at the airport, I had the thrill of sitting right seat in Sky Kingâ€™s airplane, Songbird III. Â Penny flies again!