Meredith Tcherniavsky gets her tailwheel endorsement!

2700 hours is a respectable number of hours for any pilot but this CFI/CFII learned that flying a taildragger comes with a learning curve. Meredith Tcherniavsky has tons of time in nose wheel aircraft but flying a taildragger was all new to her till she and her husband bought a 90-hp Cub with a 12 gal aux tank. Congratulations on getting your tailwheel endorsement Meredith!! Â We’re proud to have you in our ranks! Meredith and her husband Dana are not only instructors but bloggers and Meredith invited me to post her thoughts on what it’s like to be the student. 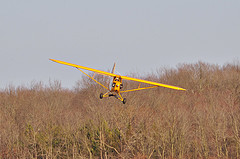 Dana has been teaching me how to fly the Cub since we picked it up in Florida on New Yearâ€™s Eve. The 14-hour trek home to Maryland gave me lots of time to practice handling the airplane in the air â€” turns, slips, stalls, and such â€” but I didnâ€™t really get to practice takeoffs and landings in the Cub until a few weeks later, mainly because the hiking boots and thick wool socks I wore during the trip from Florida were too bulky for me to get a feel of the rudder pedals. It was a trade-off between comfort and function, and when we finally arrived in Maryland on January 2 in near-freezing temperatures and gusty winds, I was very happy with my choice of warm footwear.

Since then weâ€™ve tried to take advantage of every reasonably warm weekend day to get up in the Cub. Prior to yesterday Iâ€™d logged a total of 6.2 hours of takeoffs and landings during three separate flights spaced over several weeks. I started out on a grass strip near Fallston and then worked my way onto pavement. Even though Iâ€™ve logged more than 2,700 hours over the last 10 years in many different types of light airplanes, Iâ€™ve never flown a tandem-seat tailwheel airplane like the Cub, where the pilot flies from the back seat. Itâ€™s an entirely different sight picture and for me, learning to launch and land the Cub has felt, in many ways, like being a student pilot all over again. 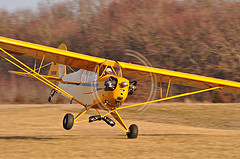 I was reminded of how important it is to fly regularly, because you do forget things â€” like, keep the stick back as you roll onto the runway, and then push it forward as you accelerate for takeoff. Get the stick all the way back after landing to pin the tail to the pavement. You donâ€™t have to worry about that stuff in a Cessna 172. It takes a while for the visual cues of a tailwheel takeoff and landing to be burned into your mindâ€™s eye, for the look and feel of it to become automatic, especially if youâ€™re used to flying tricycle gear airplanes. 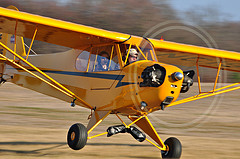 I will say, though, that those 2,700 hours of experience helped me a lot in terms of understanding how the airplane should feel when it rotates and when it touches down. Being able to sense subtle changes in lift and drag just by the pressure of the stick against the palm of my hand allowed me to quickly develop a relationship with the Cub, to understand itâ€™s own unique language, and respond. And this is very important because from the back seat with 6-foot-2 Dana in the front seat, itâ€™s difficult or near impossible for me to see the instrument panel. My experience flying other light aircraft has taught me to gauge engine power, altitude and airspeed/groundspeed just using my senses of sight and hearing. In the Cub, thatâ€™s pretty much all you need anyway. 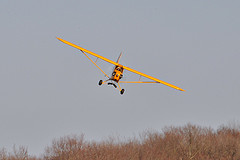 It also helped tremendously that Dana is an excellent instructor, and Iâ€™m not just saying that because Iâ€™m married to the guy! He patiently, calmly and effectively guided me through the delicate task of taming that tiny tailwheel, of keeping that featherweight airplane exactly where I wanted it to be at all times, even in gusty winds. â€œYou know how to fly a wing,â€ heâ€™d reassure me. So after another 1.2 hours of crosswind takeoffs and landings, simulated engine failures and other emergency drills yesterday, Dana decided I had proven myself worthy of the coveted tailwheel endorsement in my log book.

My personal challenge over the next few flights is to make really smooth, short â€œthree point landings.â€ For some reason, â€œwheel landingsâ€ seem easiest to me â€” when you land on the mains in a level pitch attitude and allow the tail to lower naturally as the plane decelerates. I also need a few more hours of Cub flying with Dana before the insurance company will let me fly it solo.