Nancy Pierce, longtime owner of a beautiful retractable Midget Mustang, sent me a very descriptive email about her attempt to reach AirVenture this year. I knew Nancy would be flying her SWEET little Mustang from Texas to OSH and was more than a little disappointed when she was a no-show. Now I understand why. With Nancy’s permission I’m posting for everyone. 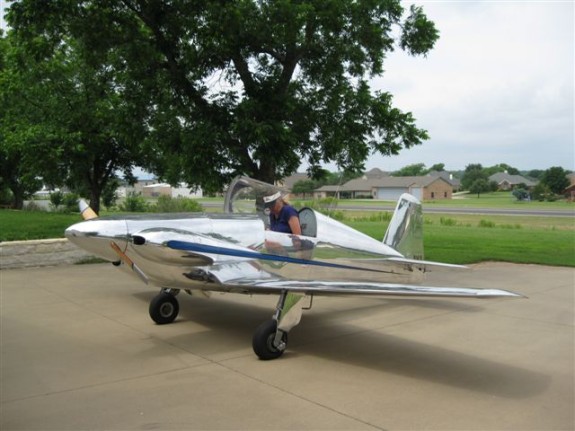 I had intended to meet you this year at Oshkosh.Â Funny thing happened on my way to KOSH.

My plane is day VFR. I don’t have needle or ball. But,….I do have airspeed!!Â I took off Friday and turned back in northern Oklahoma due to weather.Â I took off Saturday and made it to Springfield MO, my first fuel stop. I was cleared to land on a straight-in approach. My gear wouldn’t go down.Â First time in 40 years. Anyway, I broke off, reset circuit breakers, moved the gear selector up and down about a billion times, and finally cranked the gear down.

During the 25+ annuals since I have owned the plane, I have cranked the gear down 25+ times. When sitting in a hangar on jacks, the gear pretty much fall down.Â Not the same when flying. However, after actually cranking the gear down and getting a green light I landed safely. Actually it was the best landing I’ve had in ages.Â I decided to fly home gear down rather than continue to KOSH.Â Turns out….making a long story short….

While taking off that morning I happened to impale a grasshopper on a gear switch. The unfortunate grasshopper managed to splat its body just right to jam one of my gear switches in the down position.Â The motor thought the gear was already down, so it would not activate.Â Good news is that the grasshopper had the great sense to keep its body in place (even though it was the wrong place for its body to be) for the entire 2.5 hour flight home. Had the gear worked properly when my mechanic came out to troubleshoot and fix, we’d still be tearing my plane apart.

So, I flew about 7 hours (long enough to make it to Canada) and never made it.Â You have to have a sense of humor!

Anyway, all is well here. I flew it yesterday for the first time since my great grasshopper caper. Love my plane as much as ever.

But, I missed Oshkosh and meeting you and other lady taildragger pilots which I was much looking forward to.