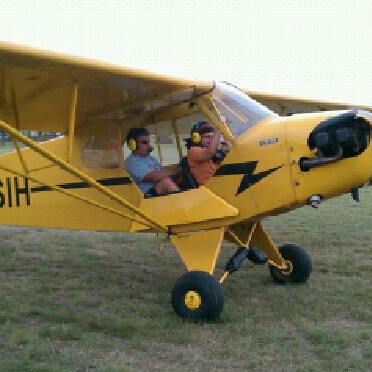 Thank you toÂ James Schrag, the first person to submit a ‘confession’ in the “What Was I Thinking?” story series. James tells his story beautifully and tops it off with a YouTube video of the moment it happened “…the nose dropped out and headed down”. This is great stuff and a valuable learning lesson for all aspiring aerobatic pilots. James is based at OK94, Collinsville, Oklahoma. 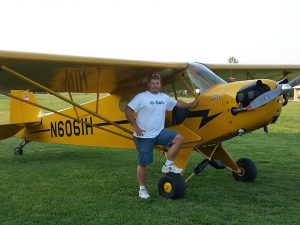 There comes a time, I suppose, in every pilot’s life, when they at least consider pushing their limits into flight regimes or maneuvers they have not yet experienced. Actually, we all do during our initial and advanced training. Usually, it happens with a CFI riding along in the seat next to us, either instructing or, at the very least, riding shotgun to save us from ourselves when we get in over our heads. On this particular day, I thought I knew enough to attempt a new maneuver, without the safety net of the CFI, or even the benefit of discussing it with one.

After all, how hard could it be? I had seen lots of airplanes do it at many airshows. With enough altitude, what could possibly go wrong? I had, in fact, successfully looped my ’46 J3 Cub several times already without stressing the air frame or my confidence! Why shouldn’t a barrel roll go just as smoothly?

As I climbed to my practice area, I had plenty of time to mentally rehearse my plan…drop the nose, build speed, pull up, wait a bit, jam the stick full left and wait for the full span Cub to roll all the way over. Sounded good at the time. When I reached what I considered to be a safe altitude, I did some clearing turns while bolstering my nerves. Just to ensure my confidence, I looped the Cub once more just to prove to myself that I was, indeed, an aspiring aerobatic pilot.

A couple more clearing turns and it was time. I pushed the nose down until the airspeed increased to about 100 mph. That should be good. A quick pull on the stick started bringing the nose up and bleeding speed off. As the nose came up through the horizon, I planted the stick in my left thigh and held it there. The Cub reluctantly responded with an agonizingly slow roll to the left. Forty-five degrees, then ninety, then something more than ninety, but less than one hundred eighty. And then it happened…the nose dropped out and headed down. The maneuver had suddenly become a mutilated split S. I was inverted, but not vertical. The agonizingly slow roll rate had already convinced me that options for the best way out did not include a roll to upright. So I pulled through the dive. EVER, SO, GENTLY! The noise increased dramatically! Wind noise, engine noise. Crap! The tach was creeping through redline! I pulled the throttle closed but probably later than I should have. The engine continued to windmill due to the airspeed which by now had also increased to well above Vne of 120 mph. The airspeed was pegged at 140. I had read that a Cub windshield fails first at about 125 mph. A lot goes through one’s mind in a situation like this. For me, it went something like this…

“Oh, SH*#, that wasn’t supposed to happen! Wings level, stop the dive. So this is how it ends. I have stupidly killed myself. Engine overspeed, Chop the throttle! Good God I’m too fast! Watch out for the windshield. Fly it all the way into the crash. Pull back EASY, EASY, EASY! Listen and feel for parts coming off of the airplane. Nose up a bit more to bleed off excess speed. Back to Vne. Whew, not dead yet! DUMBA$$, DUMBA$$, DUMBA$$! Finally, 60 mph, safe to roll some throttle back in and nose back down to straight and level. BREATHE! Thank you God for saving me from my STUPID DUMBA$$ MOVE! SLOW turns and pitch changes to check integrity of aircraft. Land and complete THOROUGH inspection of aircraft. Hey DUMBA$$, don’t EVER do that again in this airplane! Thank you God! I love my family! I nearly left them. STUPID, STUPID, STUPID!

I have since debriefed this episode with several CFI’s and learned some valuable lessons, including how to safely perform the maneuver (in a different airplane!) as well as these gems I’ll leave with you.

1) NEVER attempt any maneuver in an airplane without proper and thorough training!
2) Do not attempt any maneuver in an airplane not specifically designed for and deemed airworthy and capable of that maneuver.
3) Sharing life lessons like this in public will expose one to harsh criticism and judgement. Accept it, and realize that if it saves even one person from repeating your mistake, it has been worth it.

If you have a “What Was I Thinking?” story you’d like to share, please submit for review using the following form.