One last “sortie”, from the Doolittle Raider 70th and final reunion

Apr 2012 One last “sortie”, from the Doolittle Raider 70th and final reunion

in Blog by Judy Birchler 2 Comments
0 Likes
By Andy Heins
One last “sortie”, from the Doolittle Raider 70th and final reunion
Many of you have heard me talk of my great friend, Herb Stachler. Herbie is 93 years old and doesn’t look or act a day over 75! Herbie flew 102 combat missions in a P-47 during WWII in the European Theatre, mostly low level strafing although he did fly escort to B-17’s. he was awarded the Distinguished Flying Cross, Belgian Croix de Guerre, and 22 Air Medals, just to name a few. His brother Walter was also in the Army Air Corps but as a B-25 tail gunner in China. Walter had the unfortunate luck of being shot down on his second mission, bailing out at low level and Â being severely injured, having laid on a Chinese mountainside unconsious for two days with head injuries. He returned to the States where he was hospitalized for nearly a year! 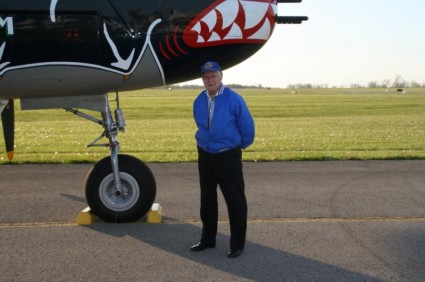 Walter with the B-25 Betty's Dream before his flight

So, with the Doolittle Raider Reunion in town, Susan (Theodorelos) suggested that maybe we all get together and buy Herbie a B-25 ride. Everyone agreed! She then suggested we call our good friend Matt Jolly, who runsÂ Warbirdradio.comÂ and see if he had any pull to make this happen. After a few calls back and forth, we had Herbie a ride. About a week later, we got his brother Walter a ride, thanks to the generous folks at Texas Flying Legends. Then Matt called very excited…..would Herbie like to go for a ride in a P-51????? I knew the answer so we began putting that into motion. We are now about a week out and Matt calls again. The Texas Flying Legends Museum has decided to fly their P-51, Curtiss P-40, Corsair F4U, and a real Mitsubishi Zero along with their B-25 to the gathering. The P-51 was brought just for Herbie! 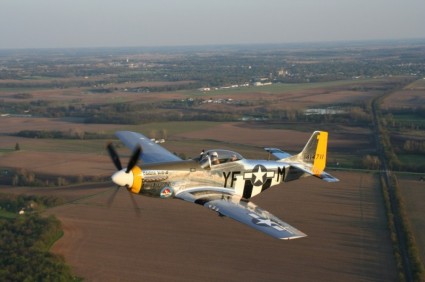 Herbie in the back seat of the P-51

All this time we have kept this secret from Herbie concerning any rides. I lure he and his brother there telling them that Matt wants to interview them for his show. As the weekend arrives, plans keep changing due to weather. Finally, Wednesday looks like the go day. I of course kept his sons in the loop so they could come see this event. We all arrived and the weather was perfect. Herbie and Walter went to be interviewed while we set the bait. After the interviews and photo shoot were complete, Matt asked them if they would like to take a ride in a B-25? Both quickly said “yes”! We start walking towards one of the B-25’s when they stop at the P-51. Warren Pietsch, pilot of the P-40 and a Waco owner then starts asking Herbie about what he thinks about a P-51. Herbie says “it’s a good airplane, but if you took a hit in the engine or cooling system, your done! Not like my P-47!”. Warren then chuckles and says “but if you had the chance to fly in a P-51, would you go?” Herbie responds quickly with a “Hell Yes”! 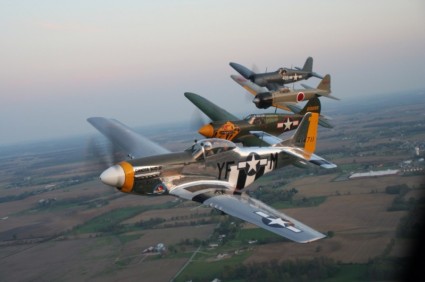 Formation with all the fighters

They help Herbie into the P-51 and I escort Walter to the B-25. We both climb into the waist gunner area. A second B-25 decides to go with us filled with photographers, Herbie’s two sons Tom and Billy, and our favorite 12 year old student pilot I have spoken about who we have taken under or wing, Sophie Lucas! We fire up and taxi out, the four fighters and two B-25’s. We launch and it is quite apparent, Walter is having a flood of memories coming to him. After takeoff, I unbuckle and look out the waist windows and see the fighters coming. I get Walter up and tell him to hold onto the gun. The next thing we see is a P-51 slide underneath us and right into tight formation. I can see Herbie in the rear seat grinning. At this point, Walter thinks Herb is in the other B-25. I point at the Mustang and tell Walter “that’s Herbie”! He looks…..then slowly raises his hand and waves. I can see Herbie looking back at us and soon he recognizes Walter in the waist gun position and starts waving back! It was a magical moment! The brothers had never flown together before! Each fighter takes turns coming up alongside and flying with us. I climb back into the tail gunner position and snap away photos!Â The Zero then pulls up close andÂ Walter gets a (figuratively) shot at himÂ at which point the Zero turns on the smoke and peels away like he’d been shot down!! 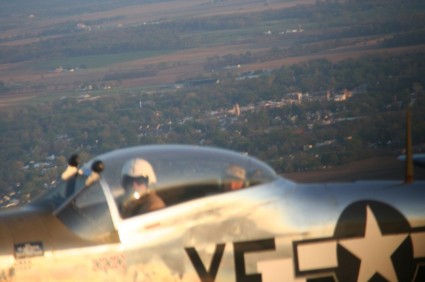 Close up of Herbie

Then all four fighters join up on the right side in echelon formation and we make a pass over the field. We fly a big racetrack pattern for over an hour in the perfect evening sun. It was incredible!!!!!!! We then make one last pass over the field with each fighter breaking off in the typical overhead approach. We land and taxi in last. Herbie is out of the P-51 with a crowd gathered around him. I bring Walter over and all the pilots join for a big group photo. They then have Herbie and Walter toast the event with shots of Crown Royal. 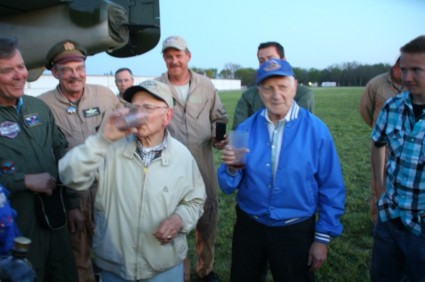 The toast with Crown Royal after their "sortie"

Special thanks to Texas Flying Legends, Matt Jolly and Warren Pietsch for making this happen. They have given both Herbie and Walter gifts they will cherish the rest of their lives!

Group photo with all the pilots