Pat Hange: Support one of our own! 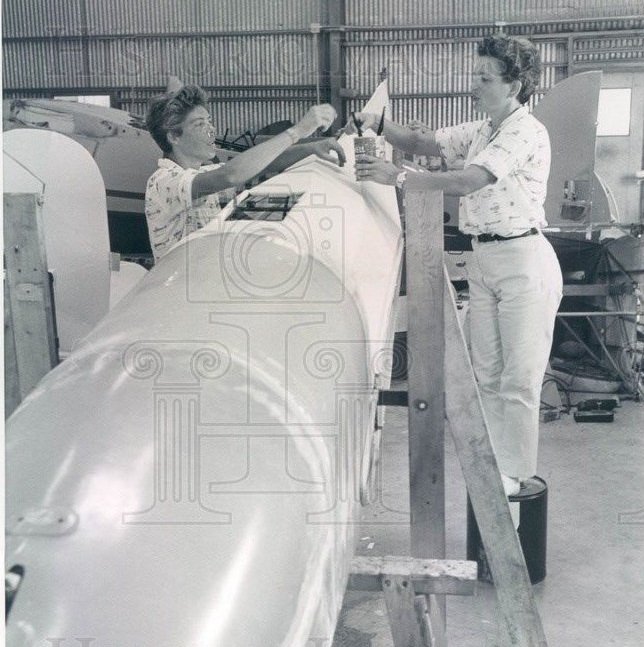 The name ‘LadiesLoveTaildraggers’ leaves no doubt about this group of gals … we love flying and we LOVE our taildraggers! Time and again, our members come together, friend each other, seek each other out, meet & fly together, and are a trueÂ community who support each other as individuals and pilots. Ours is an awesome group of ladies who I am happy to call friends.

More than anything, I hope new members recognize the value of friendship and camaraderie, and seek out like-minded ladies for support and encouragement. We are all here to mentor and encourage each other. Please join our Ladies Love Taildraggers Facebook group for interactive conversations, advice and support.

I also understand lady pilots, mechanics, and instructors who came before us paved our way and opened many doors. We owe them much. I recently spoke to one such lady, Patricia Hange, who is based at X06, Arcadia Airport, Florida, and she blew me away and made me think again about how far we have come as female aviators, instructors and mechanics. Pat’s an old school lady taildragger pilot who flew Taylorcraft, many a-tow-plane,Â Citabrias and more.Â 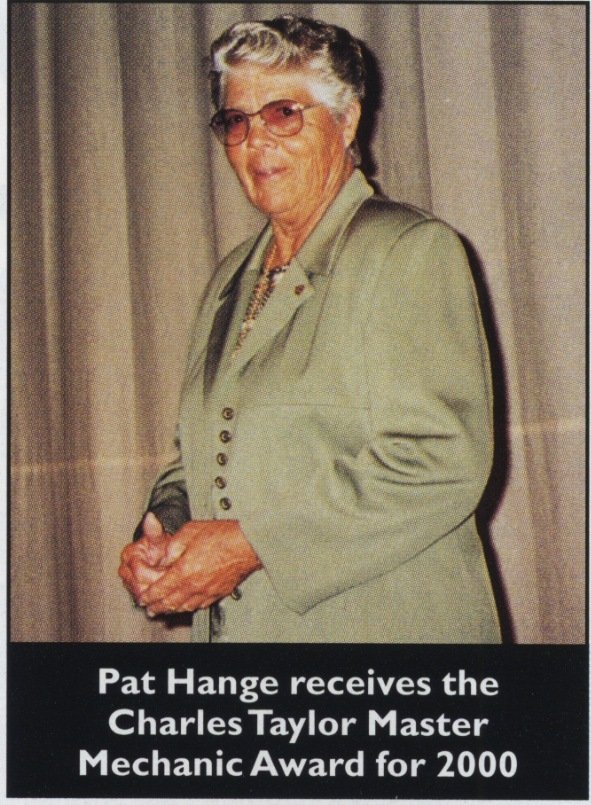 Pat Hange holdsÂ Commercial, Single engine land, Multi engine land, Instrument, and Glider ratings. She’s a CFI for SEL and glider, a Pilot Examiner for airplane SEL & glider, and an A&P and IA.Â She’s an aviation legend and has a soft spot for Arcadia Airport, X06, as she and Harriet Hamilton operated Lenox Flight School at Arcadia Airport during the 70â€™s & 80â€™s. They both spent their entire lives in aviation and are both in the Soaring Hall of Fame.

Pat still lives next to Arcadia Airport where she can see the grass strip from her back window. At 89 Pat is still active but admits she is slowing down. When we spoke, she was doing an owner assisted annual on a C150 but no longer does the dirty work she once did. She enjoys meeting pilots, talking airplanes and everything aviation. Lady aviators, I intend to stop by Arcadia Airport and meet Pat on my next visit to Florida and I encourage you to do the same. Nothing would make Pat happier. Send me a note and I’ll provide contact info on Pat Hange. 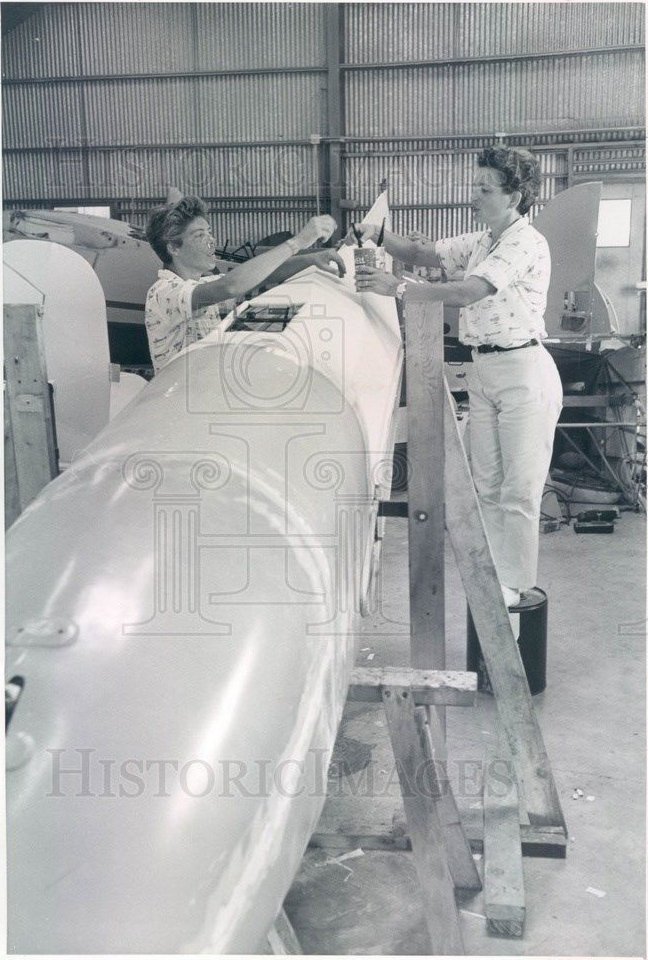 The following excellent article about Pat is fromÂ www.amtausa.com

Ever hear the term “Prop Girl”? Well, Patricia Hange has. Pat, as she is known by, started her aviation carrier as a “Prop Girl” by gassing airplanes, sweeping hangars and other responsibilities that a girl of 17 would do to be near aircraft. But her love of aviation can be found, literally, on the seasoned leather rim on the cockpit of a 1929 Douglas 0-38, way before she was a prop girl. This is the aircraft her father flew in as an observer for the National Guard in Cleveland Ohio.

Pat was 17 when she started at Cook’s, straight from high school. She would follow her love of aviation by being a “Prop Girl” and eventually started working with mechanics more than she worked in the hangar. Eventually she “edged into the job”. At age 19 she was already removing spark plugs from Corsair F-2-G. She never thought she was in an unusual profession for a girl. And neither did Cook Cleland & the men she worked with.

Pat said, “You know, I found outÂ  years later that my dad got me that first job as a prop girl with Cook Cleland. I fueled them, hand propped them, greased tailwheels and swept up after everyone in the beginning, but as time went on and Cleland got more and more involved in racing, I had the chance to work on all sorts of aircraft: PT26’s, V77’s, Wacos, Corsairs and PBY’s. Fabric work was what I was good at then, too.” There was one particular event that Pat remembers where an elevator needed emergency fabric work and her patch held. Even though Cook Clelend, who was flying the aircraft, pushed the aircraft too close to 400 MPH around a closed course!

After Pat took her A&P written exam Cleland volunteered for the Korean front and closed down Euclid Airport. Pat then went to work for Thompson Products (now TRW), first on the burring line (sanding parts) and then later as a parts inspector in the quality assurance division. It wasn’t working on or around aircraft, but she was at least inspecting aircraft parts which in itself is an overlooked and responsibility laden job.

Pat had had acquired the burned out shell of a Taylorcraft and rebuilt it, then rebuilt another. She then earned her Private Pilot certificate. That’s when Pat met Harriet Hamilton. Pat said, “Harriet was running Lenox Airport in Ashtabula, Ohio, and I went up there looking for Taylorcraft parts.” It wasn’t long before the two paired up, Hamilton a school teacher before she became a flight instructor, understood the business end of running a flight school. Pat became the maintenance end of the Lenox Flight School business.

After visiting the Schweizer factory in Elmira, New York, where gliders were manufactured the two got involved in gliders and got involved in the sport. They then made Lenox Airport the first home of the new Cleveland Soaring Society. Pat would go on to earn her commercial and CFI ratings so she could also teach in the gliders and powered aircraft the school had. After the cold weather reduced the flying conditions in Ohio the two moved to Bartow, Florida where they rebuilt the Lenox Flight School in the winter of 1963. It was at this time that Harriet encouraged Pat to get her A&P certificate so they would be less reliant on outside help with their aircraft. Taking the oral and practical exams some 10 years after taking her written portion, especially when the 10 years were from 1954 to 1964 (written exams did not expire in those days) wasn’t the easiest thing in the world for Pat to do. But working on aircraft for as long as she had with all the experience that she earned got her through this test.

She and Harriet were at ‘Circle X’ which became Mulberry airport in Polk County before moving further south to Arcadia in 1985.Â Pat soon became sought after for her careful restorations of older aircraft. Her IA certificate, which she earned in 1978, enabled her the ability to sign off annual inspections and major repairs. This also enabled Pat to become completely independent in her shop. When Pat applied for her IA she was one of only four women in the country with the certificate.

Patricia “Pat” Hange would go on to earn the F.A.A.’s Charles E. Taylor Master Mechanic Award for her more than 50 years of experience in the aviation maintenance community. Pat was the second F.A.A. Certified Female I.A. to receive this distinguished recognition. 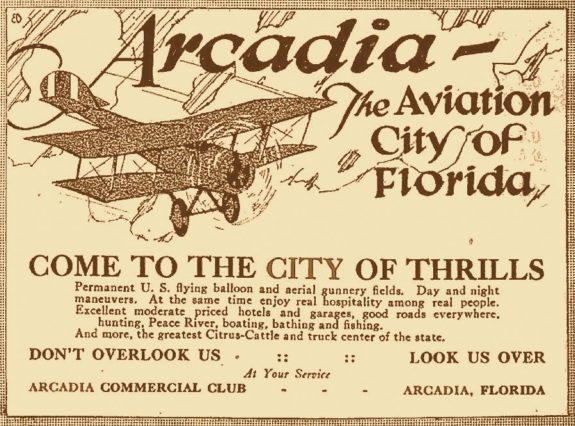 In 2014 Friends of Arcadia Airport, Inc. began work clearing some unused land on the airport to develop a Fly-In/Camp-Out Center. Recreational under wing camping is growing in popularity and Friends recognized the potential of this type of on airport facility to help make Arcadia Municipal a destination airport for pilots who enjoy airplane camping. 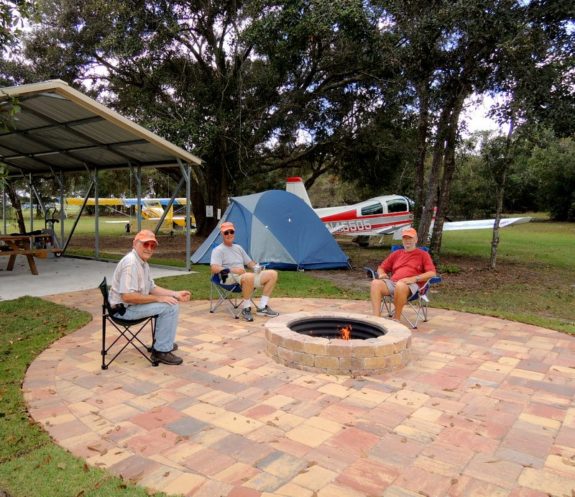 They developed a unique facility where pilots can taxi right onto the campsite area and push their plane back under beautiful oaks and pitch their tent. The site features a 20 X 30 pilot shelter with picnic tables, a beautiful fire pit surrounded by brick pavers, running water and portable toilets. 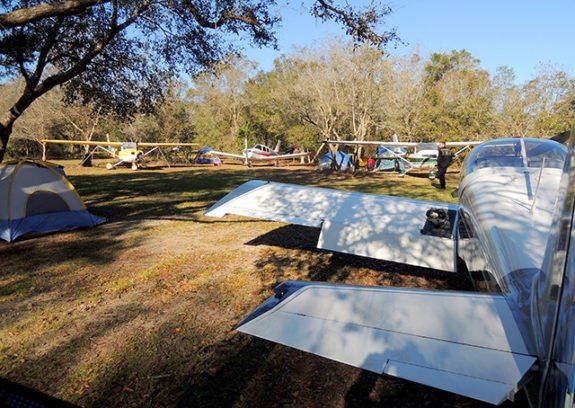 Aircraft and pilots participate in Arcadia Municipal Airport’s Millennial Wings Fly-In/Camp-Out at Aviation City the weekend of Feb. 26-28, 2016. Friends of Arcadia Airport worked for three years to develop the flying and camping center designed to allow aircraft and their pilots to taxi directly to scenic wooded campsites complete with a pilot’s shelter, fire pits, and other amenities. Photos courtesy of George Chase.

The site is attracting pilots from all over the United States and has hosted pilot seminars and large fly-in camping events. Friends is working with local businesses and attractions to provide transportation into town for the visiting pilots. The site was fully funded by Friends and donated to the City of Arcadia who owns the airport. Site use must be aviation related and is by reservation only through Friends of Arcadia Airport, Inc. 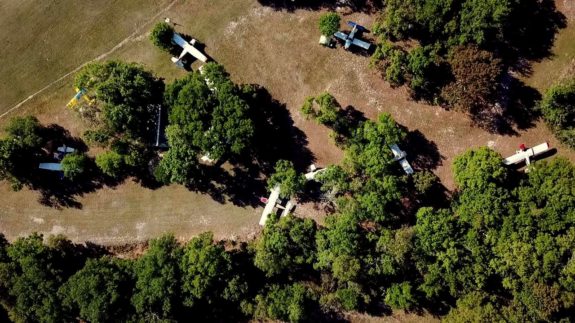 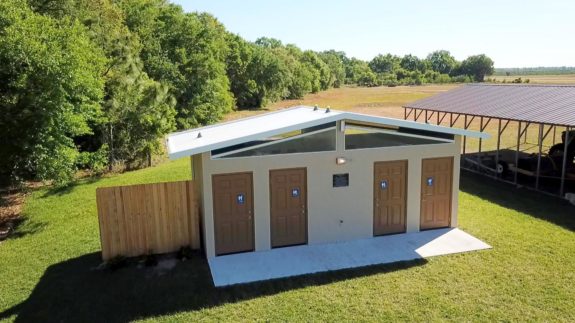 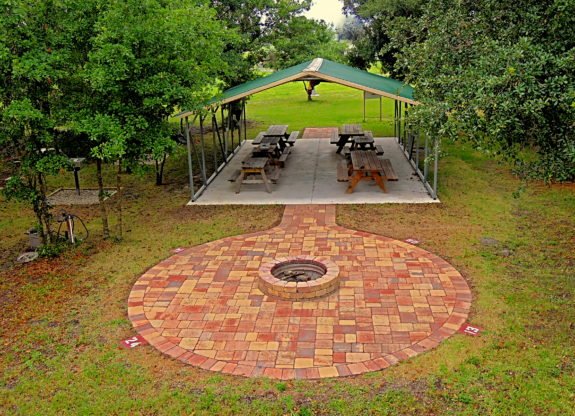 If you land a Arcadia do yourself a favor and visit a true legend in aviation, Pat Hange.