Poem in Your Pocket Day

Who would guess – there’s a day called “Poem in Your Pocket Day” and it just happened to be this week. (You can learn a lot listening to PBS while driving to work!) Â The day slid by unnoticed on the blog but it got me thinking about the lovely poem, written by our very own lady taildragger pilot Melinda Hooper, that says it all so beautifully. 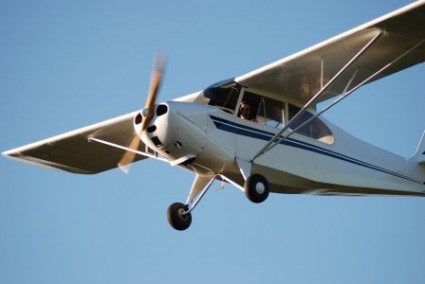 ODE TO A CHAMP

In the fall of nineteen-ninety

On a mild November day,

I lost my heart to a little white Champ

As it flew me up and away.

So unhappy was I that I didnâ€™t know how

To myself take a plane to the sky.

And I hadnâ€™t the funds if I did have the skills,

To buy my own aircraft to fly.

Well, after a while Iâ€™d mastered the art

Of piloting planes in the blue.

But to own a champ â€“ now that was a thing

How to manage I hadnâ€™t a clue.

For that kind of airplane was rising in price

So much faster than I could save.

By the time I had enough money, I feared,

I would have one foot in the grave!

Some years went by and I flew the planes

With the third wheel on the nose,

But my heart was still with the tailwheel types –

I just had to have one of those!

My funds grew slowly, and from time to time

Iâ€™d think that maybe I could

Find a Champ somewhere that I could afford,

But doubted that ever I would.

A Champ just perfect for me.

The plane, the location, the price was right

Oh, could it really be?

I conferred and thought, had mechanics look,

And after some anxious time,

The deal was made, registration sent –

It needed some work and some TLC

To achieve a return to the sky,

The airplane was ready to fly.

Now I swing the prop, bring the engine to life

And take flight whenever I please.

I go up with the birds and the clouds so high

And look down on the tops of the trees.

Yes, I take off and fly in my very own Champ,

From a pretty grass runway, no less!

On the fine autumn day those eight years ago,

Who would have been able to guess?