Porterfield NC32412 is better than ever!

By Judy Birchler, host of www.LadiesLoveTaildraggers.com

Of all the things I’ve posted on the website, this one makes me the happiest! Â I have a personal connection to this very special bird and I’m delighted old friend and current part owner in this great project, Hank Meador, has sent me photos and details to share.

So what’s the story? Â This beautifully restored Porterfield is the first airplane I ever owned – well, 1/3 of it anyway! But hey, when you’re flying it, it’s all yours! Â I flew the daylights out of it shortly after getting my pilot’s license and spent many hours flying along the Ohio River chasing ducks, landing on grass strips and getting my first taste of the very best in flying – tandem taildragging. 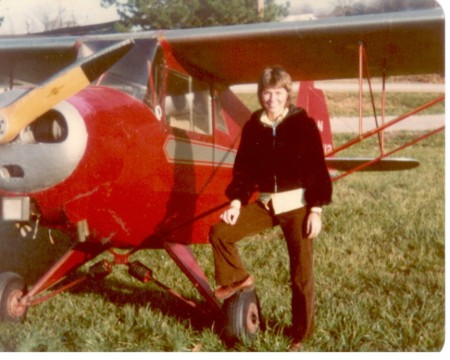 The red Â ’40 Porterfield had a 65 hp Lycoming back then that leaked a little oil, didn’t always want to start on the first few swings of the prop and had some minor issues you’d expect in an old taildragger that hadn’t been flown a heck of a lot in recent years. Â It also wasn’t too speedy but I wasn’t particularly interested in speed anyway.

I remember flying it 40 miles north one afternoon getting pushed along by a very generous tailwind only to start getting really nervous when I decided to turn and head for home. Â I remember holding onto the stick, eyes glued to the fuel tank, hoping I’d get back to the airport before the last drop of fuel ran out. Â I did! On December 10, 1940 the Porterfield factory in Kansas City, MO completed the aircraft, serial number 842. Â She had 14 owners over the next 30 years until purchased in 1972 by Tom Crane of Skylane Airport, Evansville, IN. Â It remained at Skylane throughout the next 38 years , flyable until a tornado pounding 100 mph winds struck the airport in 1982. Â Even though most of the airplanes based there were destroyed orÂ substantially damaged by the wind, #842 received only minor damage; 3 left wing ribs were broken, the fin and rudder bent and the wooden turtledeck was fractured. Â Due to the damage the airplane was taken out of service and stored in pieces in an old barn. 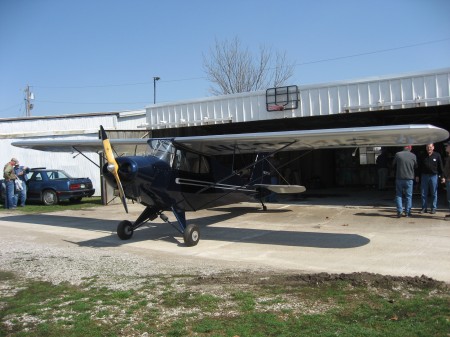 Fast forward to 2005 when the 4 partners made the decision to do a full and complete restoration of #842. Â With the combined experience of amateur woodworkers & model airplane builders, auto body repairman, a Xerox field engineer who can repair anything electrical or mechanical smaller than a locomotive and of course the necessary veteran tailwheel pilot(s), their project Â began. 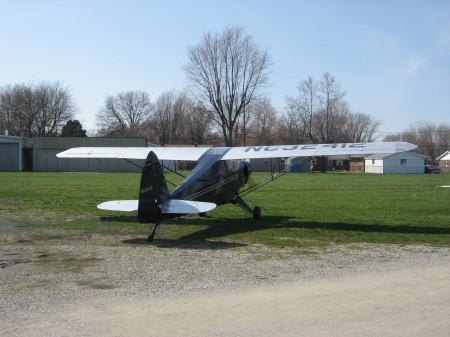 Beautiful from every angle

Some of the details included replacing the entire turtledeck with 1/4″ aircraft five-ply plywood & straight-grain white cedar stringers, adding new side and bottom stringers, floor boards & seat panels, and covering in Dacron polyester fabric. Â They needed replacements for the heel brake pads and found the reproduction Model A Ford accelerator pedal footrest was an exact duplicate. Â All the instruments were tested, serviced and found to be in good working order. Â Upper & lower cowl panels we irreparable and were duplicated. A freshly rebuilt Lycoming O-145-B2 was mounted and a gorgeous old Flottorp 69 x 44 prop hung in place. 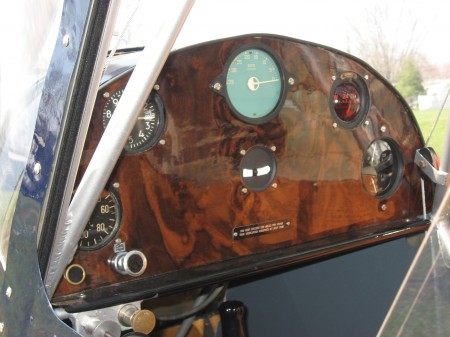 Local burled walnut was used on the new instrument panel

On May 22, 2008, NC32412 flew again for the first time in 26 years. Â Bud was given the honor being the pilot of the first flight. Â The project required almost 2 years from start to finish with the partners meeting on a regular schedule at least three workdays a week. 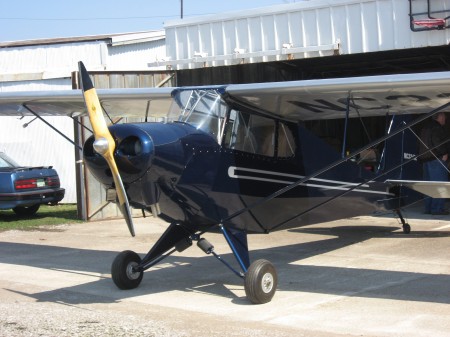 Congratulations to Hank, Fred, Bud & Randall on a beautiful bird. Â And oh, I’m patiently waiting for my first ride in 34 years!??!!

Thanks to Vintage Airplane Magazine, Sept. 28 issue where you’ll find the complete story.