Rhonda, welcome to Ladies Love Taildraggers! Â You have no idea how happy I am you registered so we can all learn about your incredible story. Â We can only hit the highlights here but I’ve included a link near the end of this post to your website for all those that would like to read about the entire adventure.

Rhonda Miles has a 1972 Cessna 180 Skywagon and is based outside of Chattanooga, Tennessee, Collegedale Municipal Airport (KFGU).

The following provided by Rhonda. “I saw a flier for your group on the board by the Vintage planes at Sun-N-Fun last week.Â  I kept my fingers crossed that it was a good website and interesting.Â  I was not disappointed.” 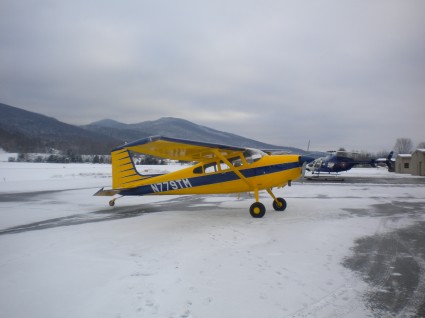 My first flight was at 3 months old in a Cessna 195. Â My Dad was a cropduster in Arkansas for 46 years so I cut my teeth on taildraggers, Â short strips, levee tops, and sand bars.Â IÂ have 47 airplanes in my logbook and 27 are tailwheel. Â I used to instruct in a J3 Cub outside of Nashville. Â I fly Hawker 800XP’s to support my habit of aircraft ownership. Â I am ATP rated with 3 type ratings but my love is tailwheel. Â  I have a 1972 Cessna 180 now, which is my dream plane. Â “Everyone has a dream, don’t they??”

In 1998 I flew around the world, through Russia and Siberia, with a female friend in a M-5 Maule. Â Taken from the website:

Americans Rhonda Miles and Nikki Mitchell recreated one of history’s most daring and remarkable flights. TheÂ journey, known as the Flight of the Rodina, was a story of courage and stamina in the tradition of Lindbergh and Earhart. It took place 60 years ago in 1938, when three Russian women pilots flew non-stop from Moscow to the southeastern tip of Siberia. They flew with virtually no radio transmission, through skies so overcast they blocked all visual landmarks yet they broke a world record and opened up the route across Siberia. They were feted worldwide, and received their country’s highest award, The Gold Star of hero of the Soviet Union.

The following picture is with the group in front of the Maule is in Siberia.Â  The men are Russian military, sent to fly along with usÂ in a military AN-2.Â  They were to “Be SUPPORT” (yeah !!)Â  I am the one in a ball cap.Â  The girl to my right is Khalide Makaganova the, 1984 World Aerobatic Champion.Â  She flew with me in the Maule.Â  The brunette to my left if Nikki Mitchell, my best friend and the one that did the flight with me.Â  Through Russia she flew in an AN-2 with Natalia Vinakarova, an airline pilot with Magadan Air.Â Â Nikki manages Waylon Jennings business and has for over 20 years. 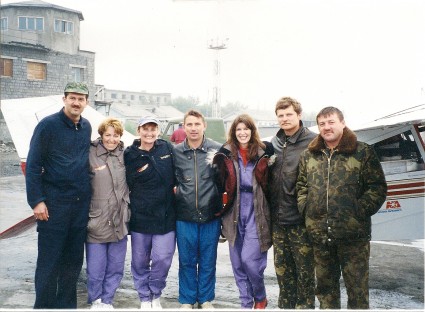 We still have a website up with the flight on it at Â www.bridgeofwings.com .

In 1990 and 1991, I also spent a month each year in the jungles of Vanuatu searching with the Ni-Vanuatu natives for the remains of a WWII pilot that was killed in a Corsair. 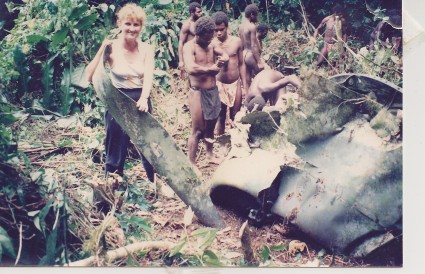 Corsair found in jungles of Vanuatu

This is Nikki and I hauling our first transport of 12 dogs for Pilots N Paws.Â  Since Jan 31, 2010 “Jezebel” my Skywagon has saved 40 dogs lives. 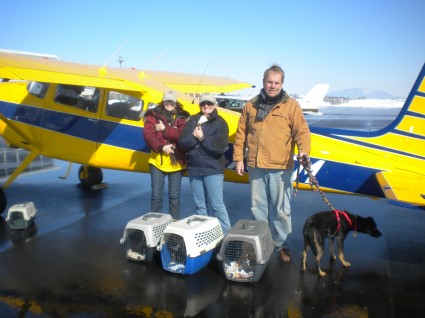 So, I guess you could say, I love aviation, tailwheels, and adventure..Â  LOL… Â  Always looking for a new one!