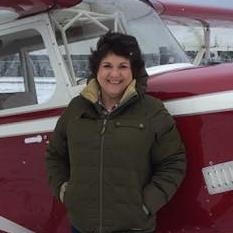 “It is still amazing to me that I built this thing from the ground up and now it flies. The first time she left the ground was amazing!!!!”Â Becky Breckenridge

I am honored to post these comments and video by Becky Breckenridge. Becky recently accomplished her goal of building and flying her own plans-built (not a kit) Christavia MK-1 taildragger. She affectionately named her beautiful bird, ‘Rosebud’. Congratulations to Becky on her huge accomplishment!

My aircraft is truly an experimental aircraft. The cylinders from the get-go were reaching temperatures of over 400 degrees during flight. So we have had to make modifications to the bottom engine cowl to allow more area for the engine heat to escape better. We have gotten the temps down to a manageable levels.

I have not flown off the 25 hours that the FAA gave me yet (which I got, instead of 40 hrs. because I had proof that my prop and engine were certificated), but am really enjoying the time I am in the air. It is still amazing to me that I built this thing from the ground up and now it flies!

Another cool thing out of all this is that I got my Repairman’s Certificate because I could easily prove that I was the builder.

Thanks for your interest. I am happy to share my airplane and information on building it with anyone willing to listen.