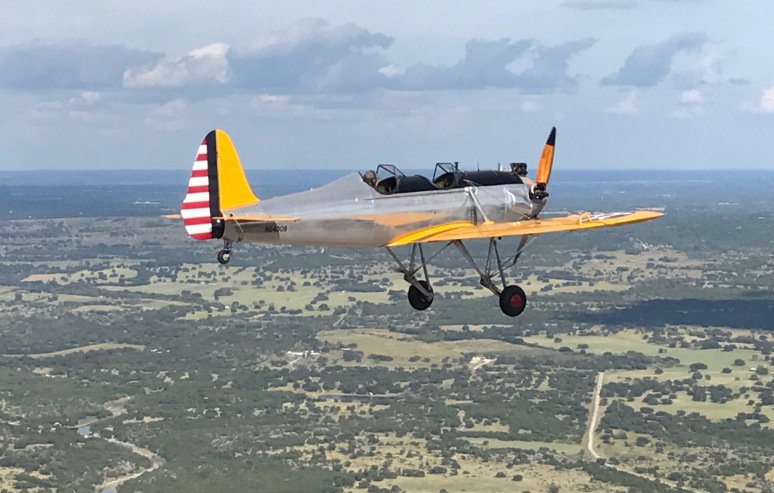 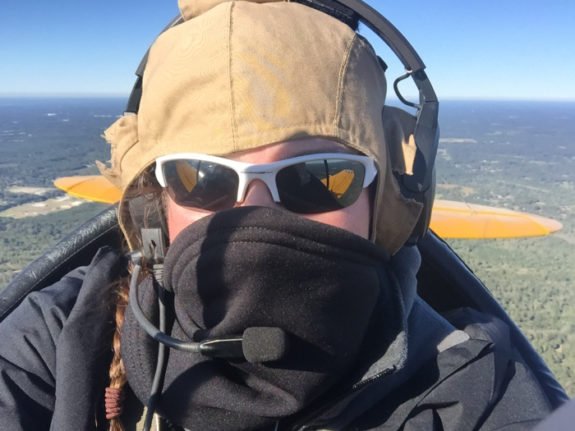 Sarah Rovner is founder & CEO of Full Throttle Aviation,Â a company that offers ferry pilot services and aircraft delivery. She is also captain at Skywest Airline and writes one of the best aviation blogs you’ll find. When it comes to ferrying aircraft, Sarah and Full Throttle Aviation cover it all. With 10 ferry pilots, they specialize in experimental, agricultural, tailwheel, and vintage aircraft — but will ferry almost anything. I recently came across Sarah’s article, “PT22 Ryan RecruitÂ Ferry Flight” and it’s just too good not to repost here. The article includes photos, video on hand propping this jewel, details on how it flies, and the adventure of flying an open cockpit aircraft during a cold October. Enjoy!

The PT22 ferry is probably one of my biggest accomplishments. It was the first time I had ever soloed a plane with a radial engine and it was dramatically different from anything I had soloed before. This type of airplane has gotten a reputation for its nasty slow speed characteristics an the unreliability of the Kinner radial engines. When I first was contacted about this job, I was initially hesitant but then agreed to the job after receiving training in the aircraft. 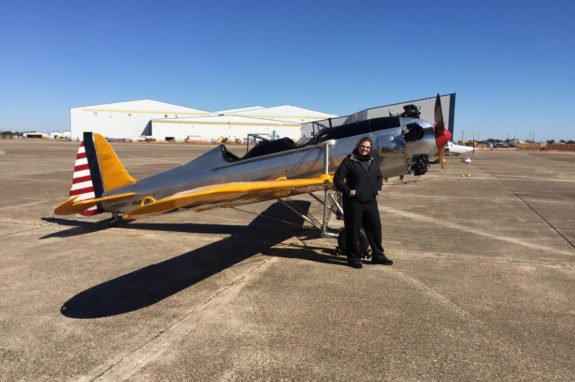 This PT22 Ryan had a Kinner R56 radial engine which was a bit of an improvement from the R55. The R56 actually had an oil cooler and some of the known problems had been fixed. However, it still wasnâ€™t known as the most reliable engine. This particular engineÂ had a couple hundred hours since overhaul but the plane had been sitting (which is common on ferry flights). I met the seller at Llano (AQO) airport who agreed to give me a check out and training in the airplane prior to taking it solo. When I first set eyes on the airplane, I fell in love. It was unlike anything I had seen before, but the way it looked really showed the passion behind grassroots and early military aviation. Its shiny body and open cockpit told quite the story as it was once the premier trainer in US military history. It was like flying a time machine â€“ exotic, exhilarating, and challenging.

The seller talked me through the priming and hand propping process. We went over checking for hydraulic lock and how to properly prime the engine. Since this airplane was manufactured without a starter it would require a hand prop. The owner went over this with me and I propped the airplane and then jumped in. The method we came up with was a set of 3 chocks (one for each wheel), with the back chock hooked to a rope that could be pulled once I was in the plane and on the breaks. I also had strong rope for tying the tail down when I was solo. Iâ€™ve been hand propping for a few years and know NEVER to trust just the chocks. I was insistent that every time I propped it that the tail was completely anchored to the ground.

The airplane starts very easily. With the big impulse coupling and long propeller, it was very easy to set it on the compression stroke and then just walk it through (see video). This way the airplane would fire only once I was clear of the prop arc. Many people see hand propping as dangerous (which it is) but with the right controls can be done safely today as it was for decades in the past. Knowing the right technique and taking precautions such as chocks and tail tie downs is key to doing it safely. 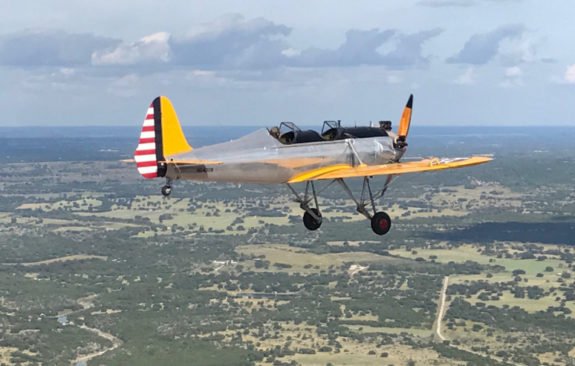 My first few landings in the plane were okay. It was very different not being able to see at all in front of me when taking off and landing. Also, the sight picture was different on takeoff than on landing because once the weight was off the wheels, the struts would extend and therefore you would touch down nearly a foot higher than when you took off! I definitely did the tailwheel dance on the runway, but by the 3rd landing I was able to hold the centerline and look like I kind of knew what I was doing. After an hour of landings, the instructor said I was ready to solo it but to take it on bigger runways with minimal crosswind until I got really comfortable. This is often the case when I fly aircraft for the first time (such as ag planes like the Air Tractor). You put yourself in controlled conditions until you are comfortable enough with the plane to take it in more challenging conditions (raising personal minimums with the addition of experience). By the time I had about 6 hours in the airplane, I was able to feel pretty comfortable with the plane and take it into shorter, narrow fields with a little more crosswind.

I ended up spending 4 days ferrying it to Florida. Now this was October in the south, and I assumed that a flight suit would have been adequate for the weather. I was really wrong! You havenâ€™t felt cold until you have felt open cockpit cold. The wind hitting your face and drafting throughout the airplane (it was back seat solo and the open front seat gave quite a breeze) just chills you to the bone! On my first overnight stop in Hammond, LA, I ended up taking an Uber to a sporting goods store to spend nearly $100 in warm clothes. Speaking of Hammond, I stopped at HDC airport and Hammond Air Center which was a pretty awesome FBO. I was going through oil like gas in the airplane and I was able to buy oil from them for a little over $6 a quart. They also have craft beer that they bring out to pilots who fly in. Such a nice little gem that people wouldnâ€™t have thought of in rural Louisiana! 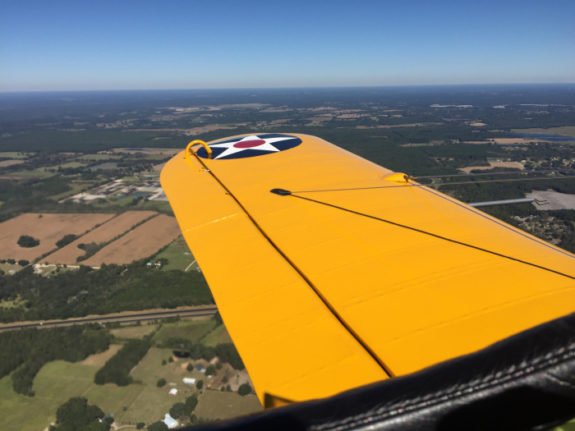 After getting the right cold weather gear, it was a lot more comfortable. The engine was noisy and shook, and an interesting thing is that the engine sounds different depending on what side of the airplane you stick your head out (a characteristic of the Kinner). I followed the road all the way to Naples, FL, ready for that old unreliable Kinner to give me trouble. But luckily it never did. It did go through a lot of oil (normal for the radials, but abnormal for a Lycoming O320) so I strapped a giant jug of oil to the front seat so that I could reach it easily during stops). My next stop for the night was in Lakeland, FL. I spent the night at the well known Hilton on the field which is the premier spot for pilots during Sun N Fun. It was the first time I had been at Lakeland outside of the event, and it was a ghost town compared to when I had seen it last. The next morning I was able to meet up with a friend of mine, Kermit Weeks, and have breakfast at the hotel with him and his daughter. It was nice catching up with him and hearing about the plans he has for the Fantasy of Flight Museum. He is also another passionate aviator who indulges himself in the kind of airplanes like the PT22, although the Ryan may have a been a bit modern for his taste!

I made it safely into the Naples airpark and the new owner and his family were out to greet me. The new owner, Lloyd, had purchased this airplane because it was the first plane he ever owned and wanted to get another one in his retirement years. I always feel like Santa Claus when I deliver airplanes. The entire family is out watching with cameras and is overcome with joy when I taxi up to them with their new airplane. Itâ€™s the best feeling in the world delivering airplanes and passengers safely, and this was another safe and uneventful delivery. 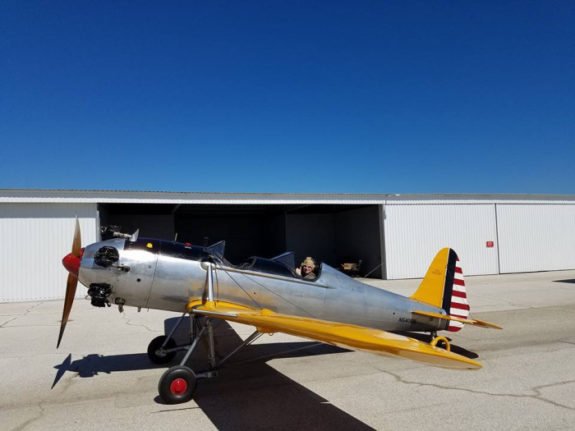 Overall it was quite the experience to fly the countryside in a piece of history. It definitely had its challenges and it is an entirely different type of flying than both the airlines and modern GA. I really have respect for the pilots who came before me and flew challenging airplanes like this one without the modern comforts, reliability, and technology of the newer airplanes. I hope to continue flying cool airplanes like this one!

Stay tuned for more write ups on other ferries!