Sally Sieberts is based at KSEZ, Sedona, Arizona in the winter and KFHR, Friday Harbor Airport, Washington in the summer.

Received my PPL in 1977 in Bend, OR.Â  I was involved with the 99’s and gave aviation presentations to the schools, helped teach basic flying principles through a community college program, raised money for aviation scholarships and donations of food and gifts to less fortunate families. Most of my flying has been in the west, but have also flown as far north as Alaska, south to Mexico, and east to the Bahamas.

A couple of months ago a friend took me for a ride in his Super Decathlon and did some rolls and loops. I fell in love with his plane and the idea of flying aerobatics!Â  My hubby was excited that I was excited, so we bought an adorable little Super Decathlon, which makes me smile every time I look at it, so dubbed it the Happy Plane.

HOWEVER, I did not have a Tailwheel Endorsement so that was step #1, and honestly, since I’m no spring chicken, I wasn’t sure just how well that would go.Â  One more little problem surfaced….even with a 3 inch cushion behind my back, I couldn’t reach the rudder pedals. Thanks to American Champion for manufacturing rudder pedal extensions so, after they were installed, problem solved! 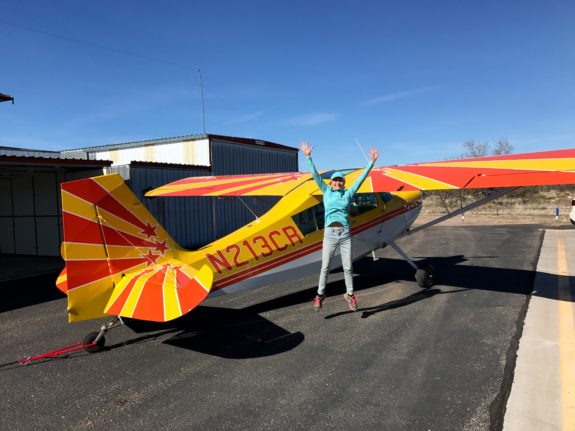 My awesome instructor Ed put me and the Happy Plane through quite a rigorous workout to earn that TW Endorsement….and a few more gray hairs…but we came through with flying colors and ever so over-the-top excitement!Â  I love being in the air, love flying my taildragger, and can hardly wait to start aerobatic lessons!Â  My dream taildragger?Â  Right now it’s the Super D, but who knows….probably whatever I’m lucky enough to be flying at any given moment!

It’s indeed an honor to join this amazing and special group of ladies!