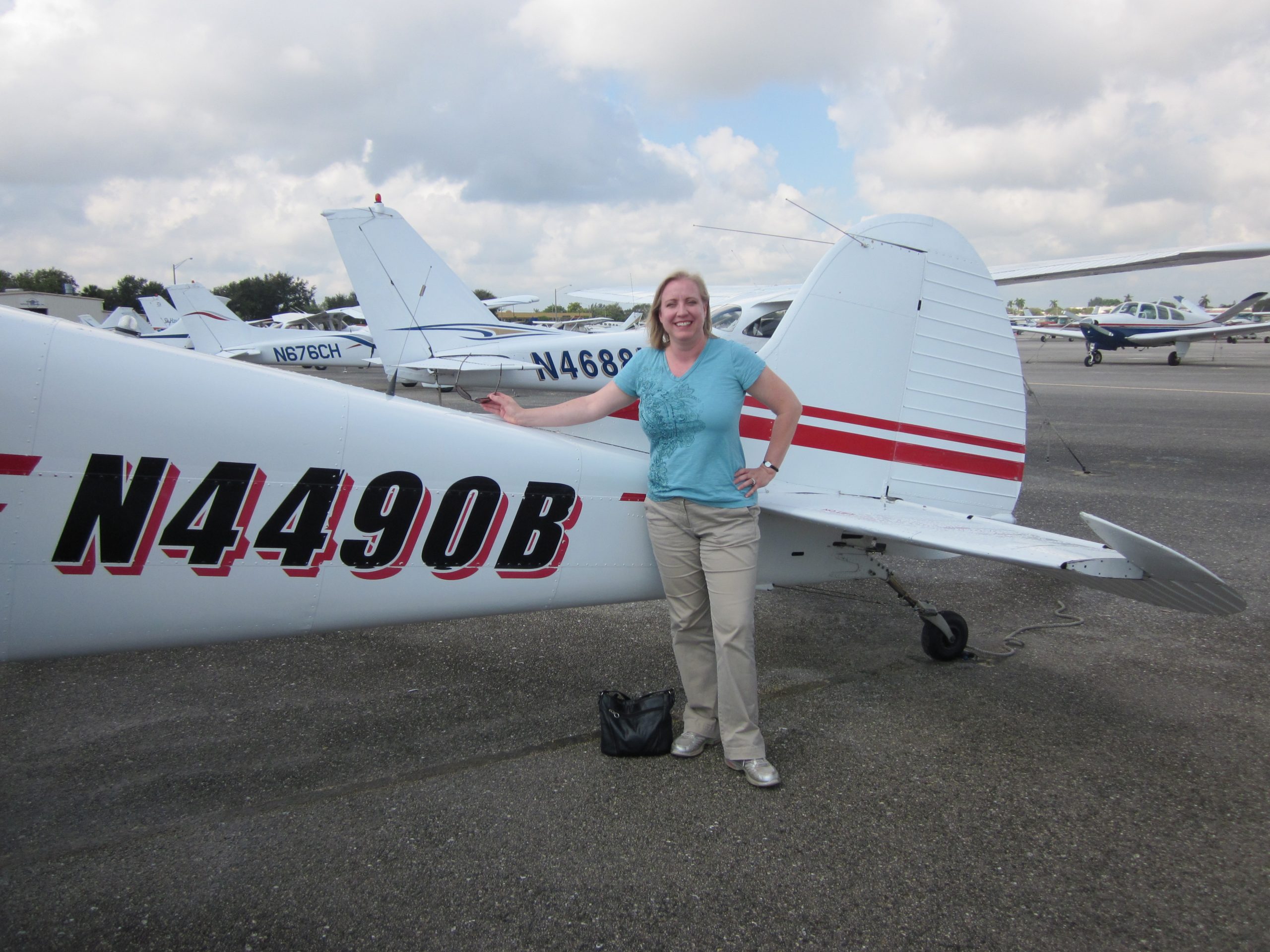 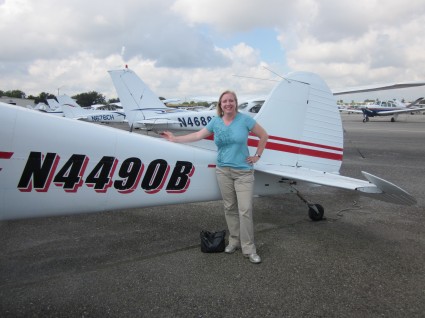 I am the treasurer of EAA Chapter 240, based at New Garden Flying Field in Toughkenamon, PA. Â The airport used to be owned by the DuPonts. I enjoyed seeing that picture of Alice DuPont on your website. 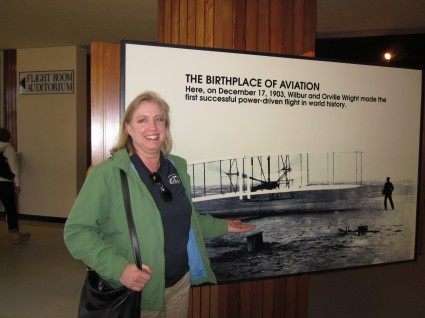 Sandy this summer at Kitty Hawk

The following is an article I wrote for my EAA chapter newsletter.

I blame it all on fellow EAA chapter member Bill Kelsall. Bill took me flying in his 1948 Cessna 170 and I instantly fell in love with his taildragger. â€œIâ€™ve got to get me one of theseâ€, I exclaimed. It handled so easily, just like a Cessna [duh!] and flying a taildragger was such a fun challenge. I was determined to own one. First step was to get that tailwheel endorsement which I quickly earned in a Citabria with Greg McCarthy.

When you are ready to buy an airplane, you have to think long and hard about what you want and how much you can afford. I wanted a four-seater to carry my family on trips, and enough power to get us there in a reasonable time. Various members in Chapter 240 generously let me fly with them in their airplanes. But nothing clicked until I flew with Bill. The Cessna 170 was just right. After a little research, I targeted the 1955 version, which is right before Cessna started putting that little wheel on the wrong end.

Next step was to find a 170 for sale. Bill is a member of the International Cessna 170 Association, and he called me after attending their annual convention which was held this year in Longmont, Colorado. He had met a guy who was ready to sell his 1955 170B due to his declining health. I contacted the nice Texas gentlemen and he sent me a bunch of pictures. The airplane was in fantastic shape inside and out, although the instruments had not been upgraded. I spent some time talking with the owner, but finally decided this airplane was priced too high and the owner wasnâ€™t willing to budge.

Bill and the Ghetto Hangar Gang pointed me to Barnstormers website which is so much easier to search than Trade-A-Plane. I caught an ad for N4491B but was too late. Some guy in Pittsburgh nabbed her. Then I found a fresh ad for an airplane in Palm Beach, Florida. It was tail number N4490B. And, yes, I had called the owner just in time. He sent more pictures and I showed them to Bill and the Gang. Florida, they warned me, is the worst place for an antique airplane because all that salt air invites corrosion. But I was determined to check it out. I definitely needed a thorough pre-buy inspection.

The Gang provided lots of advice on how to prepare for the purchase. This is nothing like buying a car! There are SO many steps! Hereâ€™s what I did before I even touched the airplane.

1. Contacted AOPA and EAA to get insurance quotes, then called an insurance broker directly who found an even better deal. I had less than 150 hours total and a fresh taildragger endorsement, so nearly all insurance companies wanted me to get 10 hours dual instruction then 10 hours solo time before carrying passengers. That sounds reasonable.

2. Contacted Philly FSDO to get the required forms 8050-1 Aircraft Registration and 8050-2 Bill of Sale. You have to use the original forms; they cannot be downloaded.

3. Ordered a title search using a link from AOPAâ€™s website.

4. Used AOPAâ€™s VRef tool to estimate the airplaneâ€™s value. I found it to be a bit low compared to what I had seen in various ads. Maybe they undervalue the classic beauty of 170s. Who knows.

5. Ordered a CD from the FAA on tail 4490B which contains ownership history and all the Form 337s (major changes) on the aircraft. Costs only $10 â€“ what a deal!

6. Figured out financing. I opted to use a home equity line of credit rather than an aircraft loan.

7. Downloaded and printed all the Airworthiness Directives on Cessna 170s. The Gang was impressed by the book I put together.

8. Prepared a simple Purchase Agreement. I wanted something to document the transaction for Pennsylvania sales tax purposes. They no longer accept those $1 sales. PA House passed a bill to eliminate sales tax on aircraft, but bill SB 1552 is still sitting with the Senate and Iâ€™m not willing to wait it out.

Mike Macario, a fellow chapter member who is both A&P and CFI, graciously agreed to perform the pre-buy inspection. I wanted a mechanic I knew and trusted. I wanted to be there, too, because this was going to be MY airplane and I wanted to look it over. We took a quick one-way flight to Palm Beach and the owner drove us to the most Beautiful Hangar-Home Community where the airplane was tied down.

[OMG â€“ if you ever win the lottery, buy a home in Wellington Aeropark!]

We spent several hot and humid hours opening up everything and testing the engine. The owner had a complete set of logs â€“ good! â€“ and we spent time reading the entries and comparing them to known ADs and FAA history. Other than a minor update we asked the owner to make in the last entry, the logbooks were in order. Then all three of us went for a flight. Ahhh, that smooth Cessna feeling hit me again. My stomach was jumpy because I really wanted this airplane.

By this time it was getting late and we needed to eat and sleep. The next morning, Mike and I met with the owner and began negotiations. Boy, I was glad I had done my homework. We agreed on a price, and I whipped out the cashierâ€™s check, purchase agreement and the FAA forms. Yippee! I just bought a plane!

After a few pictures, I climbed in the pilot seat and remembered to open the door for Mike. I donâ€™t even remember the takeoff. I was already flying high. In reality we had to stay low to avoid a few rainclouds. Three hours later we made it to Jacksonville-Craig Airport. Yep, still in Florida. Darn headwinds. But 4490B met another admirer, the FBO mechanic who liked her shape. I was proud to show her off.

Another three hours and we made it to Florence, SC. Yep, more headwinds but the clouds were gone and we could go higher. We climbed and watched the terminator rise up and create nighttime. ATC granted us flight following the entire route, handing us off to each center. After more than TEN hours flying we finally arrived at New Garden. My baby was home.

A huge, heartfelt Thank You goes out to everyone who encouraged me and guided me in this journey. I couldnâ€™t have done this without you.

That determination paid off. I am now the owner/caretaker of Nine Zero Bravo. Watch for me as I workÂ on my next few hours of insurance time. Then letâ€™s go flying!